Boyd and Silva currently enjoy sponsorship from Bit of Britain in Oxford, PA. Next weekend this awesome tack shop is holding their annual tent sale, with unbelievable deals. If you are in the area be sure to check it out! 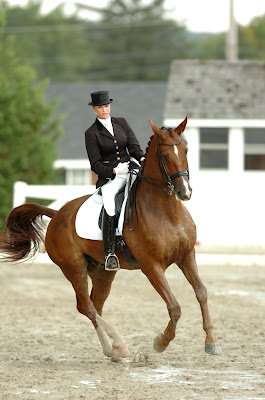 Dressage at Devon is the epitome of dressage competition in the United States, and Silva had a fantastic weekend with two of her competition horses.

In the FEI Championship for Five-year-old horses Silva and Meg Williams' FS Tiger Lily placed second overall in a class of eight horses. Tiger Lily scored 76.4%, with marks of 8.5 for her trot, 7.8 for her canter and 7.2 for her walk.

Silva says, "She warmed up beautifully - she's never gone so well. The class was under the lights and there were a ton of people there, and she was just a little intimidated by the atmosphere so I think that's why she ended up second. Last year she won the Championship for four-year-olds but the class was during the day and there were a couple other horses in the ring with her. This year she was by herself and there were a lot of spectators. She tried really hard though, I'm proud of her!"

FS Tiger Lily will head to Wellington for the winter, where Meg and Silva will share riding her.

"Jeff was awesome," says Silva. "The first day he was still green in the test, and his pirouettes felt unconfirmed but he was relaxed - he can be spooky, but he was not spooky that day. On Sunday he was tired but he tried his heart out, we just messed up one pirouette which cost us the win. It was muddy and disgusting from all the rain and the footing was horrible! In the afternoon he was even more tired but he kept going and didn't make any mistakes. For the first time, he felt like a real fourth-level horse."

Silva concludes, "Competing at Devon was great. I was lucky because I didn't get wet! It's exciting to think about competing at the FEI levels again, it's just one more step up, and I have some really nice horses."

Photo of Silva on Jeff the Chef copyright Amy Dragoo 2008
Posted by Amber Heintzberger at 2:16 PM No comments: