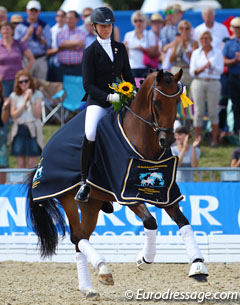 Laura Stigler and the Hanoverian gelding Doubleyou W aced the 6-year old preliminary test at the 2013 World Championships for Young Dressage Horses in Verden, Germany, on Friday morning 9 August 2013. Germany dominated the ranking of the class with no less than six of their horses in the top ten and three of them taking the so called podium places.


There was much more "restraint" in the scoring today as judging panellists Sandy Phillips, Isabelle Judet, Jacques van Daele and Linda Zang sorted out the ranking of the horses with a more realistic grasp on the points. Strong harmonious riding fortunately also had the upper hand over articifial flash and extravagance in the 6-year old division. While Stigler and Doubleyou W were today's winners with a 9.28 total score, second placed Sa Coeur and third placed Damon's Delorange were on the pair's heels with their 9.14 and 9.12 score and anything is still possible in the Finals on Sunday.

Laura rode a very clean and meticulous test aboard German former pony team medal winning Lena Charlotte Walterscheidt's Doubleyou W (by Don Romantic x Rohdiamant). The trot was cadanced and the horse kept the smooth rhythm in the lateral movements as well. The medium trot was very controlled in tempo, but not ridden the entire diagonal, the extended trot was excellent. The halt for rein back wasn't square but the rein back itself went well. The walk tour was lovely. In canter the bright bay gelding makes very big strides but overall he could be more on the hindleg. The extensions were good and the changes successful. Stigler received a 9.4 for trot, 9.0 for walk, 9.8 for canter, 8.8 for submission and 9.4 for general impression to average 9.28.

We are so excited that Silva's sister, Laura Stigler, won the first qualifying class at the World Breeding Championships for Young Horses in Verden, Germany. Laura and Doubleyou W scored 9.4! 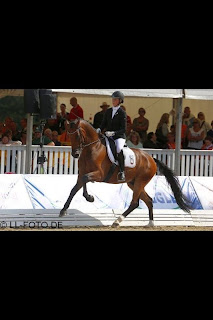 Results: http://reitturniere-live.de/2013/verden/c4_result_en.html
Posted by Amber Heintzberger at 11:44 AM No comments:

Posted by Amber Heintzberger at 11:38 AM No comments:

The social events at Fitch's Corner, including the Sunday Luncheon and its well-dressed guests, were featured in the New York Social Diary.  Prominently displayed at the top of the page is an awards photo of Boyd and Pancho Villa receiving their trophy for winning the prelim division. Thanks again to Fernanda Kellogg and Kirk Henckels for such a fantastic event that truly showcases the sport of eventing to the most prestigious social circles.


Posted by Amber Heintzberger at 3:42 PM No comments:


Posted by Amber Heintzberger at 4:50 PM No comments:

We had a great day out at Bucks County Horse Park yesterday. It could not have been a more perfect, beautiful day to ride at a show. We showed our sale horses Billie Jean Halliday and Sophia as well as Zoom, Stately, Shenanigans, Red Umbrella, Sir Eastwood, Cece and Hot Date.

Billie was such a good girl. She is a perfect mare for an amateur to take up the levels. She is very comfortable and easy at the shows. Billie and Kymmy finished second in training level .

Sophia is a 4-year-old mare that has come to me to be sold by her owner and breeder Lucy Wilson. Sophia is a small mare with a huge personality. This was only her second time of the property and her first tome at training level and she did really well, finishing second in training level test 2. This little mare is perfect for a small rider.

Stately did his first Intermediare 1 and Stately did what Stately does best!! We won with an amazing score of 75.2%. Zoom showed for the first time in fourth level, test 3 . I think 4.3 is a very hard test be because everything comes up so fast.

Zoom is impressing me more and more . We are really starting to know each other and I am so exited about this horse. I think he needs another year of strength building. I have him on a fitness program, as well with all my young horses. I think it is so important for him to get out of the ring for his head as well as on the hills for his fitness. Yesterday we won our class with 70%.

Shenanigans is a 4-year-old gelding by Rousseau. He was also breed by Lucy Wilson and is owned by Hallie Ahrnsbrak. This was his first show and we competed in the 4 year old test to qualify for Dressage at Devon. Shane was amazing: so brave and focused! He scored 77% and is now qualified for Devon.

Kymmy and Hot Date got their first score for GAIG Championships in second level.They won with 68%.
Scout and Red Umbrella Scout showed her mare Red Umbrella for the first time. This mare is a very special horse I think. She handled the show very well. They won training level test 2 and finished third in the 4-year-old test which also qualifies them for Devon.

Amy and Cece did a very nice test to finish fifth in first level in a class with a lot of professionals. They are now qualified for the BLM Championships.

Silva
Posted by Amber Heintzberger at 7:03 PM No comments:

After spending much of the summer recuperating from an ankle injury, I decided to really give my ankle a good test this weekend by running a quality group of horses around Millbrook Horse Trials. Located in the beautiful horse country of Dutchess County, NY, Millbrook is one of my favorite destinations for eventing and the great weather this weekend made for a superb competition.

It was great to see a large contingent of our owners and supporters out for the weekend either riding or spectating at the event. A great time was had by all and I felt that all of the horses had a good run.

Posted by Amber Heintzberger at 9:13 PM No comments: