Congratulations to our good friend Jackie Gilbertson of Maryland who bought Kristin and Andy Sparks' beautiful mare Ambassador’s Rose last week. Many thanks to Kristin and Andy, who brought this mare to us for her breaking in and training.

Jackie trains with both me and Silva and also is a proud part-owner of Silva’s promising dressage horse Rosa Cha. It looks like Ambassador's Rose is going to live the good life down in Dickerson, Maryland with Jackie, who is excited about her new project of training a young, talented horse for eventing and dressage.
Posted by Amber Heintzberger at 12:07 PM No comments: 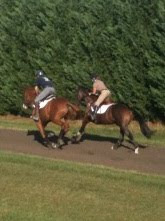 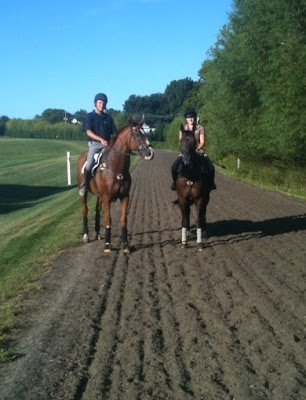 On the weekend I drove up to Richland Park in Kalamazoo, Michigan to compete in the CIC*** on my two advanced horses Remington and Neville. I also took along Kate Hicks’s Phenomenon, a new ride for me, as well as Ron and Densey Juvonen’s Charla in the prelim.

The US team selectors and vets were all watching and Richland was basically a mandatory outing for all short-listed horses, so it was the first time this summer that these guys were lining up against the other horses from the US and Canada looking at the WEG.

I had a conservative run at Millbrook a couple of weeks ago just to make sure they are both nice and fit and came out of Kentucky well; this weekend I decided to let them run on a little more, not only to show the selectors we’re on form but also as a fitness run before the Games in September.

The good thing is both Neville and Remington XXV, who is owned by Ron and Densey, put in stellar performances this weekend, especially Remi, who shone in the dressage, being the highest-placed US contender. He hardly faulted from there, cruising around cross-country inside the time but having an unlucky rail in the show jumping. I think he really put his best foot forward and let everyone know he is in fit form. He was second overall and the highest-placed US horse of the competition.

EventingNation posted this video on Youtube along with their great coverage of Richland. Remi appears around 4:30. They also posted a photo of Remi on cross-country.

The USEA Blog also featured comprehensive coverage of the event with some great photos of the horses on cross-country and stadium. Click here for more stadium photos...

Neville ran fourth in the three-star. I also felt like he is gaining momentum the closer we get to the final selection. Both horses had such impressive performances that I have been given the nod from Mark Phillips to opt out of running the cross-country at the AEC and just do the dressage and show jumping to ensure the horses are fresh and sound at the WEG.

They both endured a very extensive veterinary evaluation on Monday morning, which was favorable for both of them.

The ten-year-old Irish Sport Horse mare Phenomenon showed promise in her first two-star outing. I’m lucky enough to get the ride on this mare thanks to my good friend Kate Hicks getting pregnant. Phenomenon finished a credible eighth overall.

Last but nowhere least was Ron and Densey’s young horse Charla who is getting better and better, every event we go to. She had a flawless performance in the open prelim, winning the dressage, clear and under time on cross-country and foot perfect in show jumping to finish on a score of 29 and winning overall. She’s an exciting horse for the future and I think in time she’ll be a world-class international horse.


Complete results are located at EventEntries.com
Posted by Amber Heintzberger at 2:34 PM 1 comment: