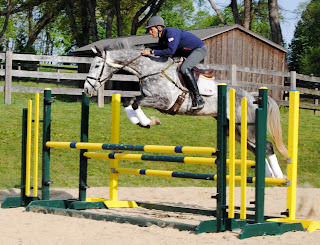 Waranga places 1st at Waradaca finishing on a 24.8!!

Waranga is a very promising young horse who seems to be getting better and better with each training ride. Boyd and Silva bred him on the family farm in Australia and imported him to the United States in 2010 in partnership with long time supporter, Amy Lindgren.

Warranga's sire, Copebella Visage is a grand prix French show jumping stallion, and his mother is by Brilliant Invader (who also sired Olympic champion Reddy Teddy). Waranga is an extremely atheletic type, being about 65% Thoroughbred.

In an effort to raise funds to take 4 horses to England, Boyd and Amy have made the difficult decision to sell this talented young horse.  PRICE REDUCED TO $50K!!

After quite a disappointing Saturday at Luhmuehlen, a scope by the German team vet discovered that poor old Thomas had a paralyzed airway.  Both Denise, Pierre and I thought it would be best to send Thomas back to America where he will live life in Luxury in New Hampshire with his owners at Stony Brook Farm.  Originally the plan was to take him to England and do Burghley, but we feel that is no longer an option.  Thomas was in good health and great spirits as I said goodbye.
I hitched a ride to England with my good friend Jules Stiller.  On the way I received a text from Lindso saying that Remi had been added to the flight. This was a huge surprise to me!  I had always thought he deserved a trip after four top-ten 4-stars, and a 39 in his dressage at his last outing. Obviously I understood the reasoning behind not putting him on the original list with Otis and Neville already on and I am still unsure what the reasoning is behind the decision to add him to the crew, but I am elated that the 'Hanoverian Hurricane' is here.

I spent Monday and Tuesday morning at Headley Stud, riding a few horses and watching the training of Jules and Mark Todd.  I must say the quality of horses at this farm is remarkable. I was also intrigued to see how much conditioning work Mark puts into his non-Thoroughbred horses.

I arrived at the training camp to see the boys in good health.  I hopped on and took them each for an hour-long hack yesterday and they all feel ready to go to work.  My plan is to gently increase the workload of dressage day by day.  It was also good to catch up with the other riders.

Thank you to everyone that has helped me get here.


Fresh off her trip to Germany, it's quite appropriate that we put up Sara's fabulous bio on our website and blog.  Many thanks to Sara on all her efforts abroad!  The staff at Windurra is second to none!!
Name: Sara Gumbiner
D.O.B: 3/11/1988
Home Town: Pilesgrove, NJ
Windurra Since: February 2010
Job Description: Groom/Rider

Sara has known that she wanted to pursue a career in horses since she was just 4 years old. There was never any doubt that she would be riding and training as an adult. A student of Tracy Wagner's in NJ, she rode young OTTB's, school horses and home bred babies in the Dressage, Hunter and Jumper rings.

As a student at Delaware Valley College, Sara served as Hunt Seat team captain and also rode on the Dressage and Western teams, riding in the IHSA National Championships in 2008 and 2009. She was determined to experience many facets of the equestrian world during her education and even spent her junior summer internship in Oklahoma with world champion Working Cow & Horse trainer, Todd Crawford. The summer of 2009 was spent starting her own instruction program at the Dream Park in Gloucester Co, NJ with a whole team of tiny campers and beginner adult riders.

But it was the sport of Eventing that really captured Sara's heart. Sara graduated one semester early and joined the Windurra Team in Aiken in January of 2010. She brought Daily Special for the season, a spunky 13' Connemara pony that belonged to Stephanie Barberra, a DelVal instructor that encouraged her eventing career. Sara showed lil' Dale in Novice that first season and had a wonderful time jumping around with the big boys.

Aiken 2011 was a fun season of bringing along another green horse, Child's Play, up to prelim and showing some of Boyd's client horses including Clancy Himself and Working Draft.

Upon returning home to PA, Sara was determined to find a young horse that could take her all the way and so her search began. After trying what seemed like hundreds of talented prospects, at Boyd's suggestion Sara visited Phyllis Dawson in VA to see some of her young horses. After a few moments of sitting on Polaris she knew she had found the one! The extremely athletic, stunning dapple gray 17'1" Irish Sporthorse cross, "Larry" was purchased by Great Road Farm located in Princeton for Sara to compete.

Around Windurra, time and life seems to be defined by that horrible weekend in 2011. Larry arrived at the farm just days after the fire. Everyone had to say farewell to some wonderful horses but Larry signified a new beginning for Sara, another starting point in life. The tragic pain of that event has seemed to magnify the magic of finding the right partner. And so the journey continues…Sara is grateful to Great Road Farm and all of her good friends, family and instructors that have influenced her life and her passionate love of horses.

Showing in Prelim in the summer of 2012, Sara looks forward to moving up at just the right pace to compete in their first 4 star some time in the not too distant future. Look for Sara and her big guy on the course!

Posted by Lisa Thomas at 4:49 PM No comments:

www.horsejunkiesunited.com has a feature about Boyd's three short-listed horses, Otis Barbotiere, Neville Bardos and Remington XXV as well as Trading Aces. Follow this link to read all about these amazing athletes and watch an entertaining video interview.
Posted by Amber Heintzberger at 7:50 AM No comments:

The American Olympic Horses Have Arrived in England 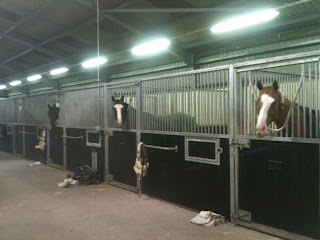 We are brimming with excitement at the arrival of Neville, Otis and Remington as part of the American team of horses at Eddy Stibbe's yard tonight in Naunton, Gloucester, England. The horses have been traveling for 33 hours since we left Cochranville, PA yesterday morning and they were more than overjoyed to have a roll in their beautiful, fluffy stalls here at Lavendar Hill Stud this evening after getting off the trucks that brought them from the airport. All of the horses traveled really well. 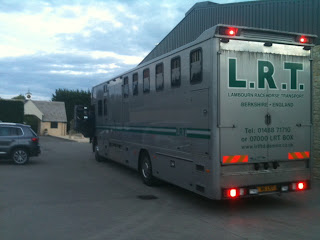 Because only one groom was permitted to fly with the horses, the rest of us grooms flew ahead of the horses to set up the stalls and assure that everything was in place for the horse's arrival after their long trip. We ended up having a bit of trouble getting through customs at the airport, leading to an almost three-hour detainment of the entire American portion of our group. But in the end, after a nerve-wracking wait, we managed to talk our way into the UK, convincing the immigration officers that we were indeed here for the Olympics. 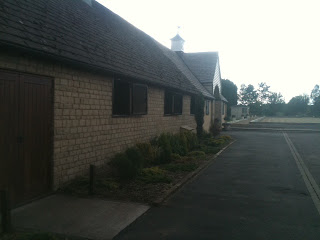 We will be based out of Eddy Stibbe's state-of-the-art Lavendar Hill Stud here in England. The farm is picture perfect, including large indoor and outdoor riding rings with superb footing, luscious pastures and stalls bigger than I have ever seen. I think Neville's stall might be bigger than his turnout space at home! The farm is situated just outside the quaint British village of Naunton, complete with cobblestone streets and garden patio dining. Because the horses had not yet arrived and we were short of work this afternoon, we had lunch at a lovely restaurant in town today, chatted with a few locals, and were impressed by their kindness and their excitement over having us here to inhabit their town for the next six weeks. These horses will be living the life of luxury for the next several weeks, and I have to say that the riders and grooms will be as well! 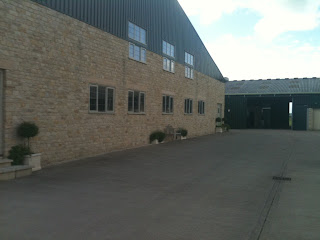 There is already a strong sense of teamwork among the grooms and riders who are here. Team Leaders Sara Ike and Fiona Tibone have done an excellent job of organizing everything from housing for grooms to feed deliveries for horses. Things are running like a well oiled machine, everyone is getting on well, and we are excited for the weeks ahead!

Theault-America's Response to the Colbert Report!

So by now most of you have probably caught wind of the hilarious skit that Stephen Colbert aired last week, poking fun at Mitt Romney and their part ownership in Rafalca, one of the US Dressage team's potential olympic candidates (ridden by Jan Ebeling).  If you haven't, you've got to take the time to watch this segment!

I was up at the USEF selection trials with Theault-America which was held last week at the USET headquarters in Gladstone, NJ.  Theault-America also supports Boyd and Silva with a sponsorship and the use of one of their fabulous Morpheus horse boxes.  Theault is touring the US at specific events and will be joining forces with the USEF as an official sponsor.  While we were there, Theault's talented videographer, Marc, filmed a well staged response to the Colbert Report.

Check out Theault-America & the USEF's response to the Colbert Report below & help make this video go viral!  Friend them on Facebook to keep up with the latest news!!

Posted by Amber Heintzberger at 3:20 PM No comments:

Neville, Otis AND Remington Ready to Fly to England! 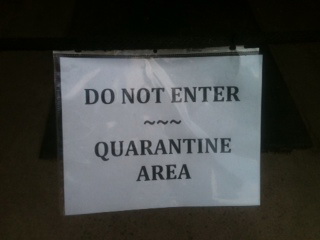 At 6:30 this morning, I loaded Neville, Otis and Remington onto the trailer, took them to True Prospect Farm and loaded them onto another trailer with Phillip's horses to travel to New Jersey for the final trot up and quarantine before getting on the plane to England.

Neville and Otis had been named to the short list last Monday, and Remington had been named as an additional nominated entry. In short, that means that Neville and Otis were scheduled to get on the plane, barring any unforeseen circumstances, and Remington would tag along for the day, with the possibility of getting on the plane if something were to happen to one of the other short listed horses throughout the day today. He would go home to Pennsylvania tonight if all short listed horses appeared healthy and happy in quarantine.

The biggest news of the day came after all of the horses trotted up one last time for the veterinary team. All of our horses looked good, and the news was announced that the selectors had decided to add Remington to the short list! Other than the addition of Remington, no other changes had been made to the short list. I was initially shocked by the news, and a bit panicked as I tried to figure out if i had packed enough tack and supplies for Remington. I am overjoyed that he will be joining us in England! 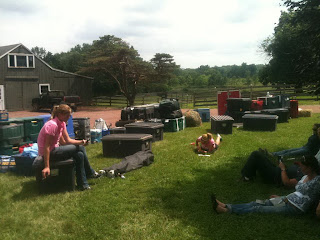 The horses are currently eating their dinner in quarantine; they are scheduled to board the plane at 10:30 pm and depart at 3:30 am. They were lucky enough to be able to quarantine at Cedar Lane Farm near Oldwick, New Jersey, where they were able to graze on wonderful grass and move around a bit before entering the quarantine lock down. 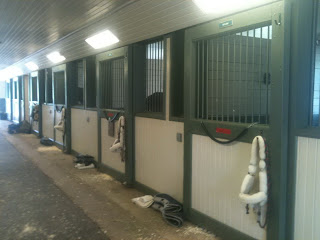 The horses are scheduled to arrive at the farm in England around 9 pm Monday night. Boyd will make his way from Germany to England sometime between tonight and tomorrow, and training camp will officially start in a few short days.

Stay tuned for more updates from England and wish us luck in our travels tonight!
Posted by Amber Heintzberger at 9:02 PM 7 comments: