Boyd Martin Fancies A Feline | The Chronicle of the Horse

Boyd Martin Fancies A Feline | The Chronicle of the Horse
Posted by Lisa Thomas at 9:25 PM 3 comments:

Stewie is joining his mom for some time off

This recent post ran on Eventing Nation and also on Holly's blog.  Our best wishes go out to Holly and Stewie, with hopes for a healthy remainder of her pregnancy and a quick recovery for Stewie.  Thank you for being such a great supporter.

We can all keep track of Stewie's recovery on Holly's Blog.


"I am sad to say I will not get to cheer Boyd and Stewie on at Rolex this year. Last Saturday night after the cross country, we took every necessary precaution we could. Dr. Tom Daniels radiographed his head and down his neck to his withers. All of that looked perfect. That evening the horse jogged 1/5, and we were all happy Stewie was looking pretty good considering his fall. Boyd and I spoke about a plan, and decided to send Stewie back to PA, so after some days off, Boyd could resume light work in preparation for The Fork.
Since the horse was in PA, Boyd's vet Dr. Kevin Keane took over keeping an eye on Stewie. While he looked good trotting up, a minimal amount of swelling had developed around his left knee. So today we decided to xray that too, just to be safe. Unfortunately we saw 2 small chips at the top of his cannon bone. Kevin is sending the radiographs to Dr. Dean Richardson, the same vet who worked on Barbaro. What we are now waiting on is to see if we should have them taken out or let them heal on their own. Either way Stewie will make a full recovery. I feel very confident between Dr. Daniels, Dr. Keane, and Dr. Richardson, he will be receiving the best care possible.
While I am sad Stewie's spring has ended soon, I am grateful he and Boyd will see another day. Like I said in my last blog, a horse show is just a horse show. They happen every weekend all over the world. Boyd is an amazing rider, and Stewie is an amazing horse. He can now come home and plump up along with his mother! Good luck to everyone the rest of the spring." 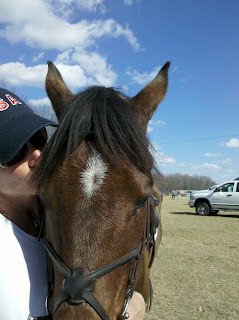 Holly
Posted by Lisa Thomas at 2:23 PM No comments:

My sister Laura Stigler was competing at a big dressage show in France for the last two weeks. She has two spectacular Grand Prix horses and they both did very well. Both horses scored consistently in the upper 60th in the Grand Prix and Grand Prix special which had her placed in almost all of her classes!

Posted by Amber Heintzberger at 4:38 PM No comments:

The price on Ambassador’s Rose has been reduced to a very reasonable $18,000. This attractive, 7-year-old Thoroughbred/Warmblood cross mare completed her first training level horse trials at Pine Top and is about to go training again at Plantation Field. She’s a quiet and trainable young horse improving every day and would suit an ambitious amateur or a Young Rider looking to go up the levels.

Windurra's event horses are lucky enough to be based at Ilene Boorman's beautiful farm in Aiken, SC during February and March. This equestrian heaven, located at Bridle Creek, is 30 acres in size and is the state of the art training center for any top quality event horse. The arena is 70 m x 30 m, rubber surfaced ring with a unique watering system that is ideal footing for the horses. There is paddock after paddock of fully boarded fence and turn out fields of every size to give all the horses ample time to relax under the sun. The actual barn is very similar to a Marriott hotel with no expenses spared on the state of the art design and layout of the stables.

iPhone Gallery
There is unlimited hacking, as Bridle Creek is on a 3000 acre piece of land that allows you to ride for hours and hours without crossing your tracks. There are unlimited trails for fitness work including a 900 m hill gallop that can be used for speed and endurance training. The Bridle Creek equestrian development also has a community cross country schooling area that is great for young horses, including a water jump.

We are very fortunate to be neighboring next door to the US assistant team vet, Kevin Keane DVM, which makes it very convenient for the treatment of the horses. The farm also neighbors Olympic gold medalist Phillip Dutton, which creates a sensational coaching environment from America's leading rider.

In 2012,Ilene plans to develop her farm even further, putting in an Olympic sized and surfaced jumping ring, along with a cross country schooling field which will include all the questions needed to train young horses including bank fences and water fences. There will also be seven new turnout paddocks which should make this farm the safest and most luxurious winter training facility in Aiken.

Mophah Farm requires all people riding on the facility to sign a release. Mophah Farm also requires a ring fee for outside horses using the facility of $20 per day, $40 per week, or $100 per month (depending on usage).

We've had a fabulous winter down here in Aiken & wish to thank Ilene Boorman for the positive experience we have had at Mophah Farm. We look forward to next season!!

Directions from Aiken:
Driving down Pine Log Road, turn south onto Bank's Mill Road (at the Circle K service station). Follow Bank's Mill Road for 8.7 miles (changes into Colbert Bridge Road) until you arrive at the Bridle Creek equestrian development on your left. Continue through the Bridle Creek development until you reach a large roundabout with a pond in the middle of it. Turn right onto Clear Creek Court out of the roundabout. The first driveway on the left is Mophah Farm at 1051 Clear Creek Court.
Posted by Lisa Thomas at 4:24 PM 2 comments:

Silva Martin is quickly becoming one of the most saught after dressage riders in the United States. She currently has a barn full of talented young horses in training and for sale. Her talent as a dressage instructor has caught the attention of several event riders and in addition to her dressage students she now coaches multiple top level eventers.
During the winter of 2011, Silva will be spending the majority of the winter in Aiken, but will be traveling to compete in the southern states as well as Florida. Please check back frequently for her updated clinic schedule.
Lesson/Clinic Series at Barbara Weinbrecht's, Earlville, Md.
Saturday April 16Saturday April 23
Thursday May 5
Monday May 16
Starting times: Weekdays, 1 p.m. & Weekends, 10 a.m.
Auditing is complimentary ; please bring a chair.
Location: 330 Sandy Bottom Road, Earleville, Md.
Cost: $115/45 minute session.
Please make checks payable to: Barbara Weinbrecht and mail to:
330 Sandy Bottom Road, Earleville, Md. 21919.
Contact Barbara Weinbrecht's
MORE 2011 CLINIC INFO COMING SOON!!

Posted by Lisa Thomas at 9:22 AM No comments:

The Highs and Lows of Southern Pines/Heading Back to PA 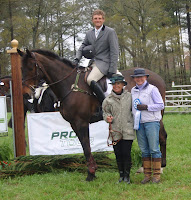 Cold Harbor: Open Intermediate, Winner of the 2011 Page Schaumberger Trophy for Best Intermediate Horse (lowest score)
Owners: COL(ret)Manny and Dana Diemer; presenter is Claire Reid.
The Southern Pines Horse Trials II was a huge event this year, drawing in a large number of spectators, in part thanks to the promotion by PRO and also partly because it is such an awesome event. The venue is sensational, the cross country is tough and technical and the show jumping is always a tricky test at Southern Pines.

I had a group of up and coming training horses to compete, the star of which was Anne Hennesey's Summer Breeze W, who had been battling a bruised foot leading up the event. She came sound just in time and smoked a competitive group, finishing on her dressage score of 27.7. I was glad to bring victory to Anne, who is a longtime supporter of mine. 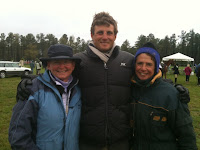 Steady Eddie, Partyboy, Double Dare and Cagney Herself also did very well in their last event before heading home to PA, gaining valuable experience. All five of my training horses this weekend oozed with four star qualities and look very promising for me in the next couple years.

My lonesome prelim horse was Colin Davidson and Lucy Boynton's Crackerjack who had a nice, cruisey, slow relaxed ride around the prelim. I chose to go easy on him as I went flat out cross country at his last outing at Red Hills and figured he deserved a nice, settling round this weekend. It looks like he is aiming towards the Bromont three day event in June if he is not sold before then.

In the intermediate I rode Dana Diemer's Cold Harbor and the Otis syndicate's Otis Barbotiere. Cold Harbor gave me the ride of the weekend in all three phases, showing his home crowd fans how to do it and winning the Open Intermediate. He looks like he is heading towards the Jersey Fresh three day event, which I believe he will be competitive at, then he will head back to his usual rider, Holly Hudspeth, to continue his career. Otis once again confirmed my beliefs in him this weekend: this is a super quality horse that walked around the testing cross country with ease. Next up for him will be the CIC 3*** at The Fork. 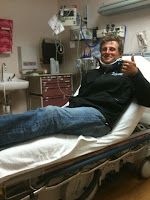 Last but not least were my two advanced horses heading for Rolex: Last Monarch and Remington XXV. Both these horses had disappointing results on paper which was largely due to some poor riding by yours truly. I gave Remington a terrible approach to an accuracy fence which he had no chance of lining up, for his first cross country penalty of his career. Then, I butchered poor little Stewie at a galloping fence where I moved up to a long distance that just wasn't there. Stewie and I came crashing down which saw us retire from the course. Both Stewie and I checked out with no injuries by the medical team at Southern Pines. I felt terrible for Stewie's mother and usual rider, Holly Hudspeth, who was very understanding and compassionate in a situation that would have sent me through the roof. Expect perfect results at both these boys' starts at The Fork in two weeks.

Results from the weekend are as follows:

COMPLETE RESULTS
Posted by Amber Heintzberger at 8:31 PM No comments: