Videos of Boyd Training in Florida

Silva took a few videos of Boyd and his horses training in Wellington, Florida

Posted by Amber Heintzberger at 9:29 PM No comments:

Fendi W was sold last week! I am a little sad to let my little Fendi go, but I am very happy that he is going to such a wonderful home. Fendi is going to Jan Garlitz who lives in Leesburg, VA. I am very happy that Jan decided to by Fendi because I know that she is going to love him and give him the best life he could possibly have. I am also very exited that I will see Fendi and Jan at the shows. I am sure they are going to have so much fun! Congratulations Jan, you bought a little super star!

-Silva
Posted by Amber Heintzberger at 9:22 PM No comments:

Clinic Dates with Boyd at Serra Valley Farm in Md.

Come join Boyd for a day of enthusiastic teaching & get geared up for the 2010 season!!

Training in Wellington, Florida with Oded Shimoni and Lauren Hough

Boyd is recently back in Aiken from a training session in Wellington, Florida. Here are his thoughts on the experience:

We had a tough, grueling time with Neville, Remington XXV and Rock on Rose in sunny Wellington. It was the first time I’ve made the trip down as a rider; in past years I visited Silva there with her dressage horses.

To work on my horses’ dressage I took them to Oded Shimoni. Silva has worked with Oded previously and Captain Mark Phillips recommended that I go him as a dressage instructor not only because he’s a fine horseman but because he’s about the same height and build that I am and he thought that he would improve my riding the most.

In show jumping I worked with American team member Lauren Hough, who has a stables full of Grand Prix show jumpers that she takes to Florida half the year and to Holland for the other six months of the year. Phillip Dutton suggested I’d benefit from riding with Laura because of his fantastic experience training with her last year.

Oded improved Neville and Rose the most: both horses mainly worked on getting soft and relaxed and engaged in the connection. Oded hopped on these two and schooled them a bit to try and get the message across of them.

I must say jumping with Lauren was outstanding! I love the way she taught: she has quite a simple way of getting the message across and she didn’t over jump the horses but worked on their rideability and adjustability. The biggest improvement was the way she worked with Remi – she’s a hands-on coach and hopped on and showed me how it’s done. The thing I got most is getting into the fences in a more balanced way and not being too hard on him, but building confidence by giving him a perfect approach.

I feel like getting help from these two fantastic trainers has helped me get the right start on the season as we aim for Kentucky. I’m pretty fired up and excited about putting some of these new skills to the younger competition horses at home, too, and I’ve got a great feeling about the three advanced horses, that they’ll all show their best this spring.

This weekend I’m taking a few of the young ones to Pine Top in Thompson, GA. I’m looking forward to getting them out; some have never had a start and some I have very high hopes for this season.

-Boyd
Posted by Amber Heintzberger at 12:09 PM No comments:

The following is a press release from the US Dressage Federation:

Dressage Legend Jessica Ransehousen Named 2009 USEF Lifetime Achievement Award Recipient
For more than five decades, the name of Jessica Newberry Ransehousen has been synonymous with the United States dressage program. And, after a lifetime spent as a high performance international medalist, lead dressage coach for the U.S. program, highly-skilled dressage judge and widely-respected ambassador for the sport of dressage, the United States Equestrian Federation is proud to announce that living legend Jessica Ransehousen has been selected to receive the USEF's highest individual honor – the USEF Lifetime Achievement Award and the Jimmy A. Williams Trophy.

From her start as a dressage rider, Ransehousen has known the taste of success. In 1956 and 1957, she earned the title of the United States Equestrian Team's National Dressage Champion. But, this was only the beginning for this multi-talented equestrian.

To close out the 1950s, Ransehousen made her Pan American Games debut and assisted the U.S. team to a Silver medal in Chicago. The very next year, she made her Olympic Games debut in Rome, Italy, as a member of the U.S. Olympic Team. Four years later, she returned to Olympic competition in Tokyo, Japan.

Between decades of high performance competition, Ransehousen spent time sharing her incredible gifts as an instructor and trainer. Those who name themselves among her many students include her own daughter, Missy, who has become a successful event rider and trainer at Blue Hill Farm, the longtime family operation in Unionville, PA. Among others who have benefitted from Ransehousen's expertise and experience are current Rolex FEI World Cup Dressage Champion and Olympian Steffen Peters, 1976 Montreal Olympic Team Bronze medalist Dorothy Morkis, and former Young Rider Gold medalist and FEI-level trainer and rider Todd Flettrich. She also instructed event riders, including such U.S. standouts as Phillip Dutton and Darren Chiacchia.

However, the desire to compete and passion for competition was still present in Ransehousen, and in 1988, she was selected as a member of the 1988 Seoul Olympic team, an impressive 24 years after her second Olympic appearance. At her third and final Olympic appearance, she road Orpheus and secured herself a place in the Olympic record books and stands among a select group of women with the longest Olympic competitive careers – 28 years.

With success on the international stage and a reputation as one of the country's most respected trainers, Ransehousen began tenure with the United States Equestrian Team as chef d'equipe for the U.S. dressage program. This collaboration would see ever-strengthening showings by the U.S. program at appearances in the 1992, 1996 and 2000 Olympic Games, the 1990 and 1994 FEI World Equestrian Games, and at the 1991 and 1995 Pan American Games. Her teams were awarded the Bronze medal at both the 1996 Atlanta and 2000 Sydney Olympics.

Ransehousen's commitment to her sport was strongly felt on the field of play, as well as in the board room. In addition to her many years of work as an FEI "I" and USEF "S" judge, she was a member of the USEF High Performance Dressage Committee, USET Vice-President for Dressage, and former Assistant Secretary of the former American Horse Shows Association (now USEF). And, in 2001, she was inducted into the United States Dressage Federation (USDF) Hall of Fame.

The USEF Lifetime Achievement Award and the Jimmy A. Williams Trophy are given to the horseman or horsewoman whose "life experience and accomplishments exemplify uncommon devotion to the sport of competition with horses and whose equestrian career and horsemanship have continually elevated the sport's excellence." It is without a doubt that Jessica Ransehousen more than qualifies for this once-in-a-lifetime honor.

The USEF Lifetime Achievement Award will be formally presented to Ransehousen during the USEF's 2010 Annual Meeting at the Louisville Downtown Marriott, January 16, at the Pegasus Awards dinner where she will be honored by fellow U.S. chef d'equipe and living legend, George Morris, as well as former team member and six-time Olympic dressage rider, Robert Dover.
Posted by Amber Heintzberger at 2:13 PM No comments:

Dressage Clinic with Silva in Aiken this Week 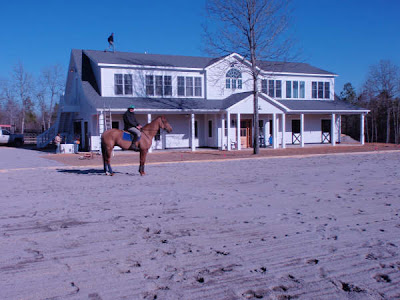 We’d like to invite everyone out to the farm in Aiken this Wednesday and Thursday to watch Silva’s first clinic of the year at our winter training facility in the Bridle Creek development in Aiken, SC. It’s a sensational farm with a state-of-the-art dressage arena, (pictured above), the perfect venue for Silva to coach some of the finest riders in eventing, including developing riders Jennie Brannigan and Lillian Heard, Canadian superstar Kelli Temple and recent California transplant Nick Cwick. It will be fun to see Molly Rosin bringing Havarah’s Charly back after he was injured last year.

This will be the first of a series of clinics, so if you can’t make it this time be sure to check our website for future dates.


The schedule is as follows: 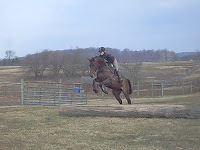 We have the competition horses settled in in Aiken.  They all shipped well, and are gearing up for the first start of the year next week at Pine Top, GA.

Meanwhile, up in Unionville, there was a slight break in the weather.  Caitlan, super groom/top knotch event rider, Silliaman gave Rose her first ever x-country school.  Kristen and Andy Sparks mare is slowly starting to look the goods.  She has a really good jump in her, careful and plenty of scope. 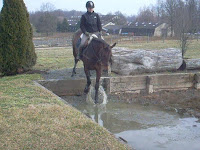 The plan with Rose is to leave her in PA with Silva doing the flatwork, and Caitlan lightly jumping her until I get back from Aiken.  I think she will be good to start her eventing carrier at Plantation in early April.

Posted by Lisa Thomas at 3:32 PM No comments: