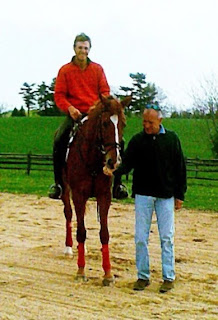 We’re down to the final week leading up to America’s biggest and best three-day event in Lexington, Kentucky. Somehow it looks like I’ve managed to get all three horses in peak condition.

Rock on Rose, (pictured at right), has moved back to Chesterland and I’ve been riding her under Bruce’s watchful eye; she seems very fit and happy in her work and I’m eager to get her down to KY. Bruce has opted just to have me gallop Lusty two times from The Fork to KY as we both feel she’s fighting fit and she’s such an athlete, we don’t want to over train her by galloping too much. Her dressage work I feel is consistently improving day by day; the trick with her is to actually ride her a couple times a day, morning and night, just for half an hour at a time. She’s one of these mares you can’t really drill to get the best out of her, you have to do it piece by piece. 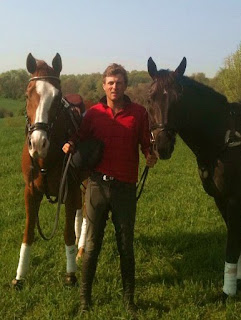 Remington, (pictured at left, on the right), the only warmblood out of the trio, his main focus is the fitness work. I feel I’ve got him as fit as humanly possible: he’s been swimming twice a week and has got the hang of that and he’ll do three fast canter workouts up Nelson’s Hill in the three weeks leading up to Kentucky. It gives me great joy to compete Remington at Kentucky as he’s been the one horse that no one expected to do anything in his career – except for Densey Juvonen, his owner. It’s been a wonderful experience being involved in the journey of Remington’s eventing career. Ironically he was basically the first horse that an owner sent to me to train and compete when I arrived in America a couple of years ago and he’s the horse that was never meant to be, as he was originally imported as a dressage horse, tried his hand at a bit of foxhunting, failed a few pre-purchase exams when he was supposed to be sold, and lo and behold here we are about to tackle one of the greatest equestrian events in the world.

Neville (pictured above, on the left), is looking hot to trot: like Lusty I’ve been gently grinding away with the dressage work. He seems really fit and is galloping up Nelson’s Hill with ease at the moment. He is the only horse that I’m riding that has actually done a four-star before (a couple years ago he finished in ninth and I feel he’s way ahead of where he was then). He’s a failed race horse from Kembla Range racetrack south of Sydney, also ready to take on the big time.

Even though I’m the only one riding the horses at Kentucky it’s been a true team effort between my super groom Shannon Kinsley, my assistant riders Lillian Heard, Caitlin Silliman and Sarah Gumblier, the coaches/lovers Silva Martin and Phillip Dutton and Bruce Davidson (only Silva in the lover department!), blacksmith Dougie Neilson, and the veterinarians that have helped out along the way, Kevin Keane, Mary Griffin, Tom Reed and Mike Ross. Thanks also to our outstanding sponsors and last but not least, to the owners who are good enough to trust me with their most prized possessions and to train and compete their horses, Ron and Densey Juvonen and Bruce Davidson. Thanks also to the most important pieces of the puzzle, Lusty, Nev and Remi.

A Word from Our Sponsors: Help feed a hungry pet.

Recently, Nutrena launched an effort to raise awareness for the need to help struggling families feed their pets along with their families. Because of animal lovers like you, this video about the need for pet food at food shelves was viewed over 12,000 times in just two weeks! As promised, we will now donate an entire truckload of Loyall Pet Food to animals in need in May!

To continue to raise awareness about hunger and the critical needs at food banks across the country, Cargill is now adding another dimension to the campaign by partnering with Feeding America, the nation's leading domestic hunger relief agency.

If this video generates 50,000 views by April 30, Cargill will make a cash donation of $25,000 to Feeding America to support its nationwide network of member food banks. Watch this video, and forward it to a friend.


Posted by Amber Heintzberger at 3:56 PM No comments: 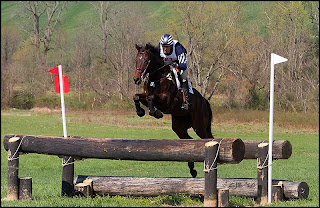 
I had a great weekend running the young, up and coming horses around Plantation Field Horse 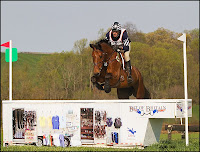 Trials in Unionville, PA. My best performance was on last year's USEA Prelim Horse of the Year, Minotaure Du Passoir, owned by Amy Lingren,who came second in the Prelim (Pictured at right).


I was also lucky enough to ride King Dingaling, (pictured above)owned by Sarah and Luke Allen, who had his first intermediate start. He is usually ridden by my good friend Sally Lofting, who is currently looking very pregnant.

The trio for Rolex are still looking fit, sound and happy...


Thanks to Steve Berkowitz for the photos!
Posted by Amber Heintzberger at 8:10 AM No comments: