With the competition year coming to a close, we have booked several clinics before heading off to Aiken!  Time to tune up!!

Silva will be returning to:

Boyd is at Bonnie Stedt's in NY - Today!
He'll be heading down to NC and TX for several other clinics!

Posted by Lisa Thomas at 9:36 AM No comments:

Many thanks to Mark and Nancy Johnson for their continued support of the crew at Windurra USA!  They are the owners of Ringmasters, the local company that has done our excavation work for the barns, roads and rings at our new property at Gibble Road.  Their son Chris is a student in Savannah and has produced a beautiful oil painting of Neville, which is now being sold in limited edition prints.  We're so appreciative of the efforts of the Johnson's and hope that you'll consider buying a print as (perhaps) a holiday gift!

A note from the Johnsons:


Mark Johnson of Ringmasters met Boyd and Silva Martin in spring of 2011 when he did the site and base work for Silva’s dressage arena at the couple’s new farm in Cochranville.  Mark, who naturally meets all kinds of people in the horse world in the course of his profession, was immediately taken with Boyd and Silva due to their winning personalities, upbeat spirit, and incredible discipline and dedication to training and competing with their horses.
Then on Memorial Day weekend, the tragic fire struck True Prospect Farm, claiming the lives of six of Boyd’s top competition horses. Thankfully, staff members at True Prospect, who tried valiantly to save the horses, recovered from their injuries.
A couple of months later, Mark was helping the Martins out, as hundreds of people did in so many ways after the tragedy. He was building a pad for portable stabling facilities at the farm and brought his son Chris, then a high school senior, along to work with him. Along with Boyd, Chris met Neville Bardos, the last horse pulled from the horrific fire, and was amazed not only by how well the game little chestnut was recovering from burns and lung damage, but also the entire story of his checkered past.
After learning from Mark that Chris was an aspiring artist, in his typical enthusiastic manner, Boyd called him and asked him to paint Neville. Ironically, just a couple of days earlier Chris’s art teacher had told him that for his next independent study project she wanted him to reach outside of his comfort zone and paint something totally different. Although he grew up surrounded by horses, Chris had never had a desire to paint them. He felt this was definitely a sign.
The original oil painting, which measures 24” x 48”, was presented to Boyd and Silva. A limited edition of 300 numbered and signed 12” x 24” prints are being offered at $90 each, which includes shipping and handling within the U.S. The first 100 will also be signed by Boyd.
Neville recovered remarkably; to the point where less than six months later he not only competed at Burghley  CCI****, but finished 7th!  However, he still requires some therapy and special care. A portion from the sale of the prints will be donated to Neville’s ongoing therapy.
Chris is currently a freshman at Savannah College of Art & Design and continues to share through his painting and the message – “Real Art for Real People.”
CLICK HERE TO ORDER YOUR PRINT!
Posted by Lisa Thomas at 6:42 PM No comments:

We were so happy to be part of the unveiling ceremony at New Bolton Center last Wednesday night. Through the generous support of Ilona English and Saly Glassman, New Bolton was able to realize their dream of building a new beautiful indoor facility which will be used to evaluate horses on the ground and under tack.  This all weather facility will really improve the ability of their staff to work with horses in for evaluation, and the finished product is gorgeous! 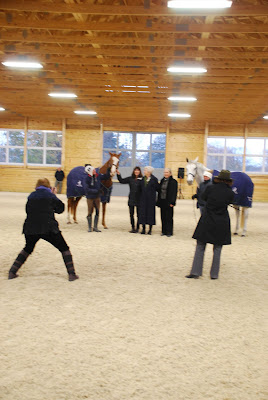 Neville and Hoku were asked to be guests of honor for the ribbon cutting ceremony, and we were so happy to attend after New Bolton's wonderful care and dedication to our horses after last year's fire. Both Neville and Hoku would have never made their astonishing recoveries if it had not been for the brilliant staff at New Bolton Center. 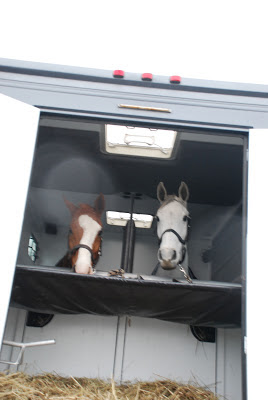 Neville and Hoku arrived safely and in style, braving the blustery nor'easter weather comfortably in the Theault Morpheus!

NEW BOLTON'S NEWS RELEASE ON THIS EVENT.
Posted by Lisa Thomas at 10:27 AM No comments: