Posted by Amber Heintzberger at 9:09 AM No comments:

Yesterday we went to a new recognized show in West Chester, not too far from us. I was very impressed with the facility and with how well the show was run! We will definitely be back for the next show!I t is a Wednesday show and a great place for young horses to go because we do not have to ship very far and they get a great experience .

I so very exited about my new horse Di Solitaire, (Sully), who is owned by Ann and Mike Laver. When Boyd rode at Luhmuehlen in Germany not so long ago , I went over to Holland on one of the days that he was there. I meet Stately's breeder and they showed me Di Solitaire. Sully was a 4-year-old stallion then, and he is now a gelding. When I rode him, the moment I picked up the trot I loved him! He feels so much like Stately and has the same great attitude. I told Mike and Ann about him and I could not believe it when Mike said, "Let's buy him!" Ann and Mike have become great friends of Boyd and mine and we are very gratefully to both for all of their support!!
Sully was, just like his big brother, all business at the show. We did the 4-year-old class and won with 79%. Next Sully will be showing at Dressage at Devon!

Elite Pharis was his normal champion self once again!! We won third level and were third level champion of the day. He is such a great show horse and I can not believe he has not sold yet. Somebody out there is missing out on a really great horse!

Likely Story was super also. This little mare is getting better and better. We placed second with 69% in first level.

Zoran is a very powerful horse and I very exited about him going up the levels; we placed second in first level also with 68%

Alison is Cisco's new owner and rider. I am so happy about it because it is the perfect match! Cisco is such a nice young horse and Alison rides him so well. They won their very first show with 69% in intro. I think those two are going to have a great future together!

Gracia Huenefeld, who is my new (great) working student, rode her mare Dia and was third in the first second level class and won the next one! We love having Gracia with us. She is a hard worker and such a nice, fun person to have around.

-Silva
Posted by Amber Heintzberger at 6:47 PM No comments: 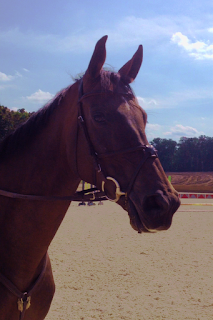 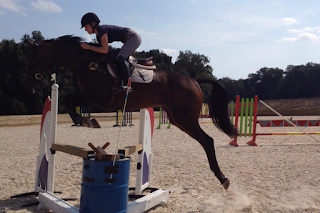 Imported 6-year-old gelding successfully competing at training level. Stay tuned for more photos and information!
Posted by Amber Heintzberger at 7:47 AM No comments:

Dominick Schramm, the Thunder from Down Under is taking the festivities at Plantation Horse Trials very seriously this year. At the moment I'd say he is one of the favorites for the bareback high jump which will be performed on Sunday, between the 2-star and 3-star show jumping. He took some training on Caitlin Silliman’s horse Looks Like Fernhill; he jumped the Irish gelding easily at about 5’4” and I believe he’s in good shape coming in to challenge the defending champion Jennie Brannigan. Ladies, take note: there is some rumor of Dominick jumping shirtless with an Aussie flag as a cape if it comes down to a record-breaking attempt.

On a more serious note, all the stars are aligning for a beautiful event with perfect weather and footing for cross-country day at Plantation Field this weekend.
-Boyd

We are having two busy weeks coming up, with Plantation Field this week and Dressage at Devon next week.

We are also very excited to be showing Melinda and Larry's three yearlings, a 2-year-old gelding and a 3-year-old gelding, in hand. Beau Guimond, who is Boyd's working student and Boyd are going to show all the babies in hand. They are remarkable young horses and I think they will do very well. Beau has done an amazing job preparing these babies for the show!

Our performance horses are training hard and they all feel very ready. Michael Barisone has been coming to our place to help us get ready and he has been a great help!

Please check out our times at Devon and come and cheer us on!
-Silva

Posted by Amber Heintzberger at 9:51 PM No comments: