Both of Boyd's Horses Clear Cross-Country at Luhmuehlen!

Shamwari blazed around double clear while Otis jumped clear and added a couple of time faults. Phillip and Happy were also clear and in the time and currently standing in third place. As you can imagine, there is much celebrating and good cheer in the American camp today. Thanks once again to syndicate member Fernanda Kellogg for sharing photos. 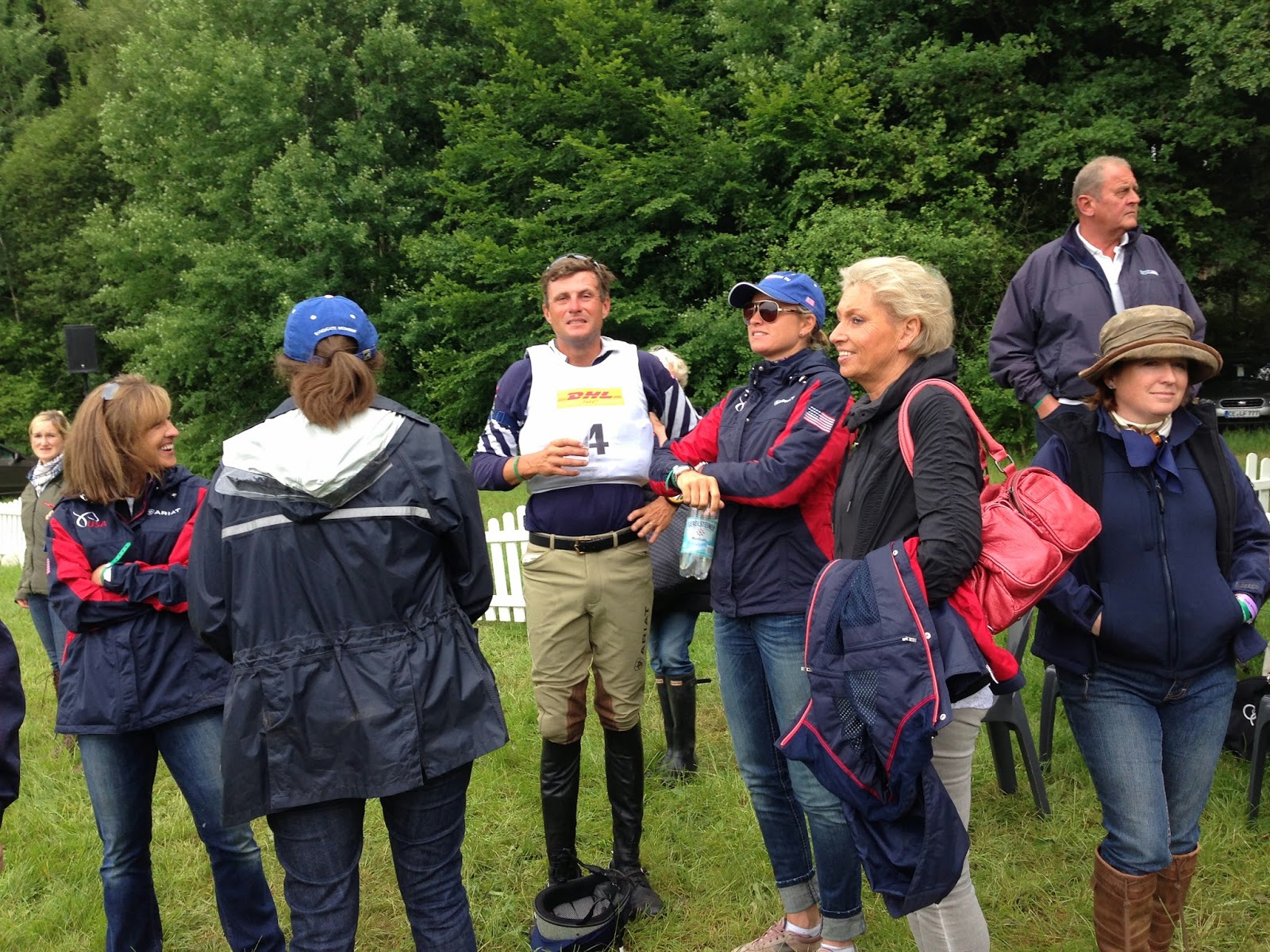 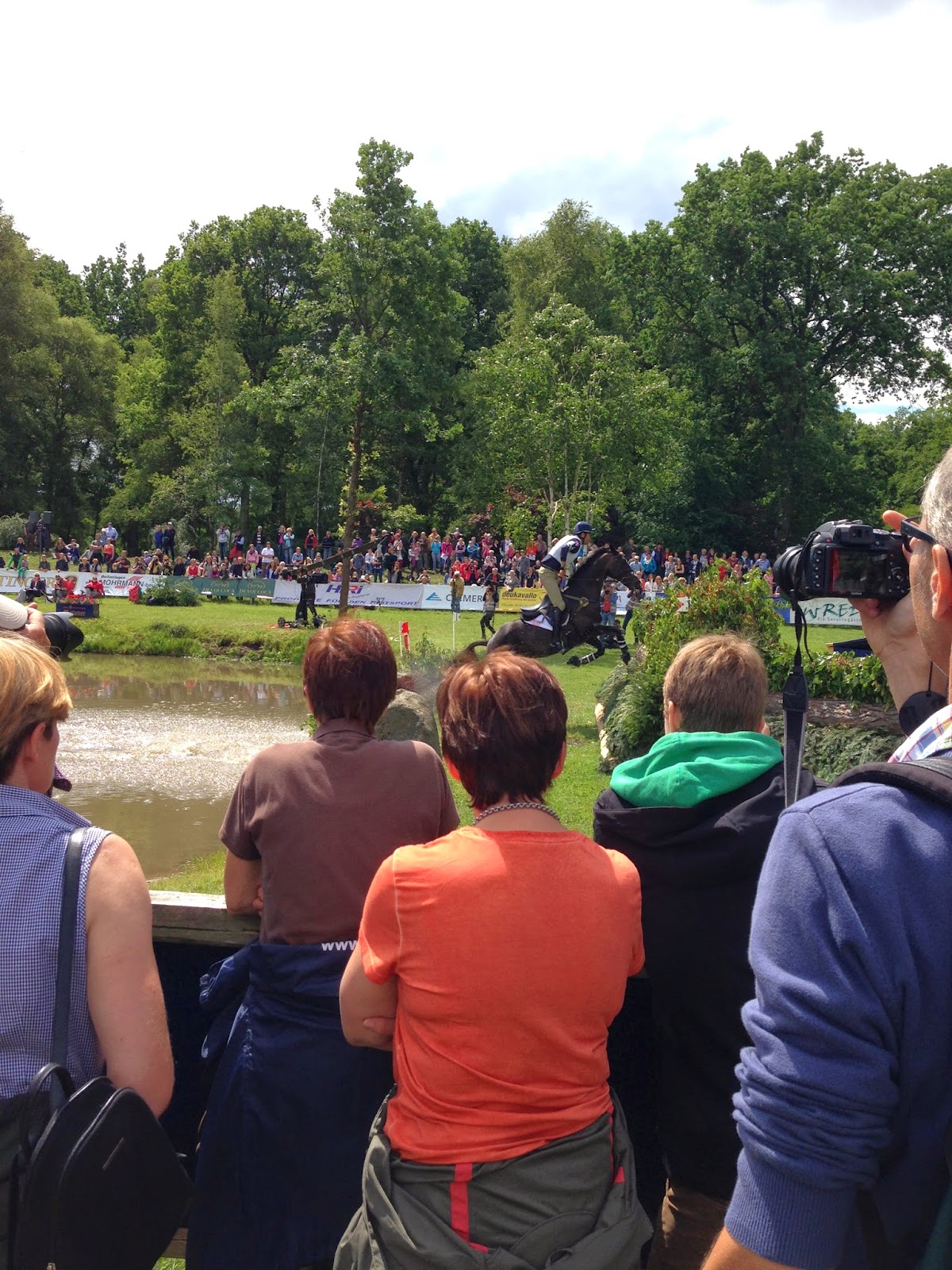 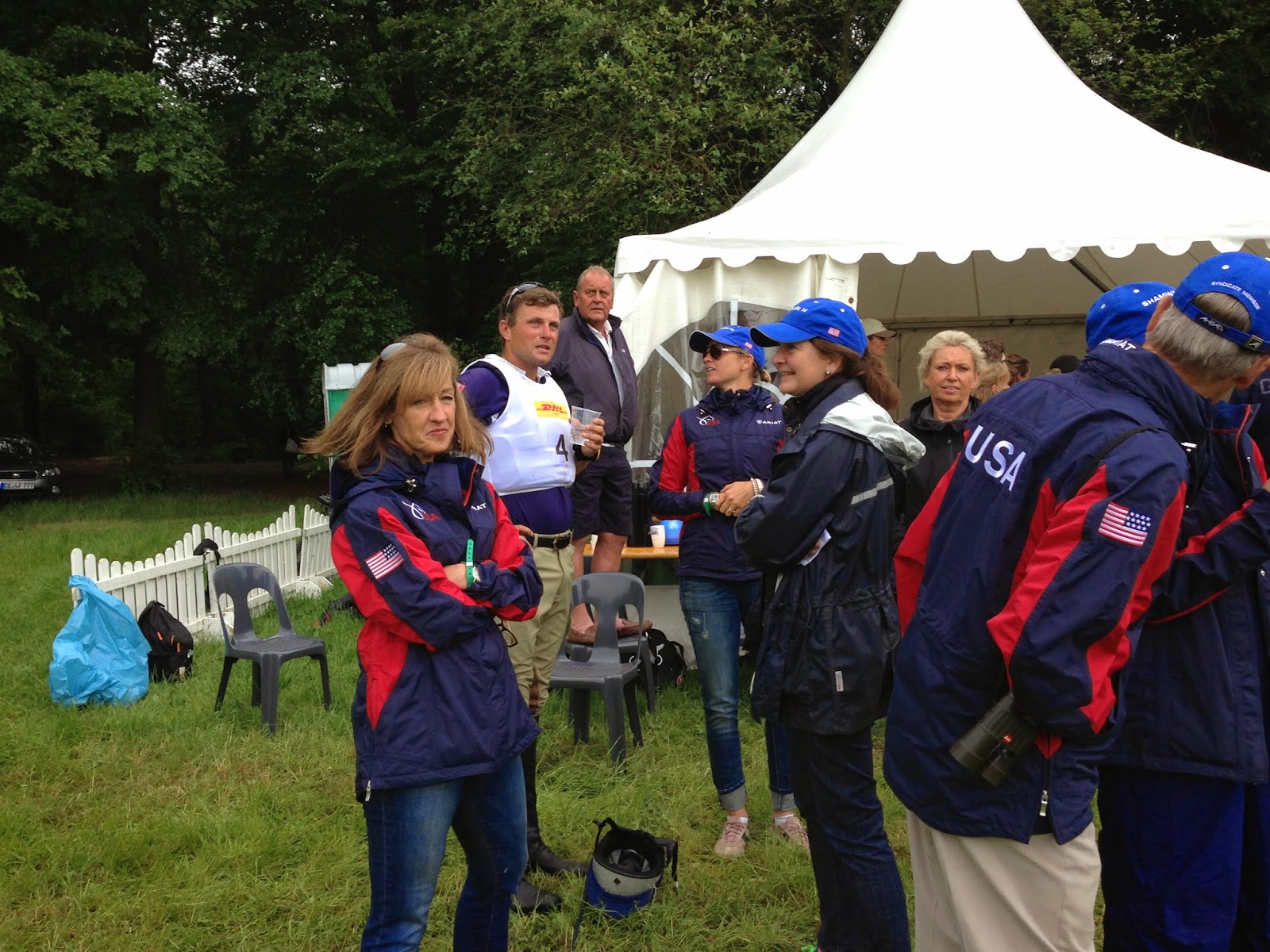 Posted by Amber Heintzberger at 7:06 AM No comments:

Shamwari went very well in the dressage today even though he was a bit feisty in the warm-up! Boyd rode him well, especially in the walk and the canter. Thsi was their first big event together and a 47 is a good start. They still need to build a partnership, since Boyd has been sidelined with his broken leg.

Otis' test was disappointing; especially since I watched their lessons with David and he looked amazing. They just had too many mistakes in the test and it affected their score, but Boyd came back and had a good test today, so that was good. There's really a lot of competition here, with a lot of top riders and horse from many different nations - a lot of people rerouted from Badminton.

I've been helping Boyd too but David is really very good at coaching, so I can also sit back and relax a little bit. Boyd's leg is holding up well after numerous course walks, but of course tomorrow is the big test and it's a tough course, a real four-star, so hopefully Boyd and his horses will hang in there.

Silva's Enjoying her Trip to Germany

I MADE IT!! Which for me is exiting since this was my first flight since my injury . I traveled over for the Luhmuehlen CCI**** with Evie Dutton , who was nice enough to pick me up at home and keep an eye on me during our trip.

It is so nice to be in my home country. I just finished breakfast and I are a ridiculous amount of food. So yummy!!

We had a good day Wednesday, with both of Boyd's horses and Phillip's horse passing the jog. Otis was a little full of himself yesterday, but he's a cross-country machine so there's still hope for him to climb up the leaderboard. Here's hoping Shamwari keeps it together today!

With both of Boyd's horses going in the afternoon, I have plenty of time to hit the shops in the Trade Fair.

Posted by Amber Heintzberger at 9:26 AM No comments:


Posted by Amber Heintzberger at 9:20 AM No comments:

Posted by Amber Heintzberger at 1:11 PM No comments:


We have three talented event horses currently on offer, one to suit any rider. Please follow the links for pedigree and background information:

SBF Eowyn
Posted by Amber Heintzberger at 1:59 PM No comments:

We had a DVCTA dressage show at Radnor Hunt yesterday and my awesome girls rode some of my horses as well as their own. I also had students Amy Heron, Pam Murphy and Sandy Retzlaff riding.

Pam was a superstar today! She rode her own Rio Royale, (bred by Melinda Walton and Larry Smith). is a young horse and he was absolutely perfect!  Pam was second in training 2 with 65% and third in training 3 with a great score of 69%.

Amy Heron and her mare Constantina - also bred by Melinda and Larry - had a super test, much better then the last show. They finished third with 64% in first level test 2 and are now qualified for the BLM championships.

Sandy Retzlaff rode her own Rigoletto in second level and had many improvements, but also made unfortunate mistakes in both tests. They are a lovely pair and I’m sure they will have a better show next time.

Scout Fort rode Ellen Kettler’s Double Scoop to win first level test 3 with a high score for first level of 71%! Scoop is a very talented horse and Scout rode him beautifully. She also rode Mike and Anne Laver and Gloria Callan's Bright Side in training level, test 3: they not only won the class with the highest score at training level, but had the highest score of the entire show with 74%!  I am so excited about this amazing young horse and so thankful to Scout for riding him so beautifully!

Gracia Huenefeld rode Mike and Anne Lavers’ horse Colin in the PSG class to with 62%. It was such an improvement; hats off to Gracia and Colin!

As much as I am thankful for my girls to ride so nicely, I can not wait to do it myself again. I am also thankful to all my owners and people around me for giving all the time I need to come back -- you all are amazing!