Get Your Tickets for Rolex and Cheer Boyd On!

Boyd has three horses aiming for the
Rolex Kentucky three-day event this April.
Click here to visit the official website
to purchase tickets so that you can cheer them on!
Posted by Amber Heintzberger at 3:48 PM 1 comment:


Boyd has just imported a 6-year-old, 16.2hh off-the-track Thoroughbred gelding named Steady Eddie from Australia. Here’s the fascinating story about how this horse came to be part of Boyd’s string of prospects:

While I was visiting friends and family in Australia over Christmas I ended up on the North Coast visiting my good mate Kevin McNabb, who’s one of Australia’s leading three-day riders.

Between swimming on the Great Barrier Reef we paid a visit to Evan Parker at his place about an hour west of Townsville, way out in the countryside, (see map) to look at future event horses. I wasn’t planning on looking at horses and was wearing a singlet, shorts and flip-flops, but Evan brought out this magnificent bay gelding. He’s actually skin and bones right now because they’ve had a drought, but he has a genuine “A” trot. Evan has done a good job of producing him straight from the track, and he jumped him over a few fences.

The horse has got a super jump in him and I just had to sit on him, so I kicked off my flip-flops and hopped on barefoot and in shorts and he gave me a wonderful ride. He reminded me of Ying

Yang Yo (pictured left, photo by Josh Walker for the USEA) when I first looked at him. Being a good mate, Kevin let me buy this one even though he had the first shot at him, which was déjà vu again because he also had the first opportunity with Ying Yang Yo – but Kevin bought 16 other horses on this trip so I should think he’s got a couple of winners in the lot.

Steady Eddie (pictured at right with Caitlin Silliman) made it to the US last week, after the tough trip across the country from Lost Angeles to 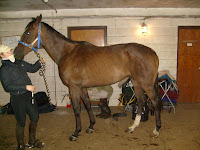 Pennsylvania in a lorry. The poor guy had never seen snow in his life! We’re feeding him up and getting him used to the good life after his days of drought. After he gets some weight on, Silva and Caitlin will do some light dressage work with him and I’ll start competing him in a few months.

This horse has some of the best Thoroughbred bloodlines, including Marscay, Northern Dancer, Star Kingdom and last but not least Secretariat. At the moment I own him outright and I’m very excited about his look and ability: my gut feeling after seeing him in Australia is that he’s a tough sort of horse, and I hope he’ll be a good one for the future.
Posted by Amber Heintzberger at 9:23 PM 3 comments: 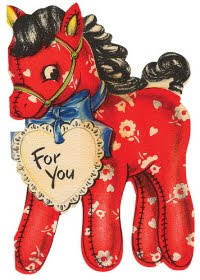 Silva, sure hope he's upgraded his present giving strategies by now!!
Posted by Lisa Thomas at 3:36 PM No comments: