Above: Ryan Starley, flight supervisor with H.E. Sutton Forwarding Company, escorts Phantom Pursuit from a 727 at Glacier Jet Center. Eighteen horses traveled from the east coast to participate in The Event at Rebecca Farm. - Lido Vizzutti/Flathead Beacon Read the article by Erin Cole


Boyd is at the airport in Chicago on his way to Kalispell, Montana for the Rebecca Farm Horse Trials. He says: 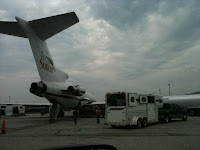 The event is taking an extra step to bring the best riders in America to the event by chartering a plane out of Baltimore for 18 horses from east coast to fly out on Monday and paying for the majority of the flight expenses. I was lucky enough to get on board; some of the other riders will be Karen O’Connor and Buck Davidson. This is a whole new frontier for eventing in America, with the organizers going beyond the call of duty by renting a plane. 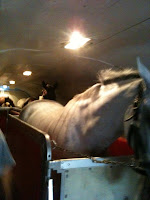 I’m riding four or five horses at the event: my main horse is Abbie and Kim Golden’s Phantom Pursuit (pictured at right, behind Buck Davidson's gray, Titanium) who is an advanced horse that my old friends Guy Wallace and Tim Boland used to compete in Australia. He was sold to Abbie, who is my student here in America; she’s been nice enough to let me ride in a couple horse trials leading up to this event. She also flew out to Montana with Phantom Pursuit to get him ready for the big day. It’ll be his first time competing at advanced level in about five years and he’s hot to trot and has been training well the past couple of weeks.

I’m also riding four catch rides who are already in Montana, from novice up to intermediate. I’m not too sure what I’m in for here, having never seen any of the horses before. I love the opportunity to compete in new and exciting places, so when the chance turned up to take on a few catch rides I put my hand up straightaway.

-Boyd
Posted by Amber Heintzberger at 9:12 AM No comments:

Dressage Horses Successful at Dressage at the Park

Silva took Jeff, Sea Lord and Fair Fiona to Dressage at the Park last weekend at the Horse Park of New Jersey. Here's the scoop:

It was a really good show in the sense that the FEI classes were very full. Usually the lover level classes are full and the FEI classes only have a few entries, but this weekend it was the other way around. I liked that very much and it was very good to compete against quality horses and experienced riders at the FEI level.

I rode Jeff in the Grand Prix on Saturday and Sunday. I was very lucky that Jessica was there to help me warm up and to watch my test - it was helpful for me to get her feedback. On Saturday Jeff warmed up very well. I always feel like I have to really wake him up before I go into the ring and Jessica agreed, so that's what I did before I went into the show ring.

Jeff did a good test with a few little mistakes, but I was very happy with him.
After my ride Jessica talked me through the whole test from the beginning to the end and that was very, very helpful. She said after I woke him up before the test I needed to ride a little less aggressively and just give Jeff a bit more time for each movement in order to make it look more effortless. I totally agree! Overall Jessica was very happy with us and we both agreed that that is the reason why we have to do a lot of Grand Prix's at this open shows.

So on Sunday my plan was to do what Jess and I agreed on and wake him up just before I went in and then not put to much pressure on him in the ring. Well, that sounds easier than it is when you are actually in the ring! Some parts were better and smoother than others but we had a lot more mistakes because I did not help him in the parts that I needed to. But trying something new is the only way to find out what works the best for us. I need to work out where to push and where to just let Jeff do the work and allow him to do it well!

I was so grateful for Jess to be there and talk to me straight after the test.
What I learned from this weekend is that I need to push less on the first day and more on the second day!

I am telling you, to ride a Grand Prix is "freaking hard"! But one day in the near future Jeff and I will get it right. We still finished second on Saturday and third on Sunday with 64% and 62%!

And then there was my SEA LORD! He was a star as always! He impresses me more and more. We did a good Prix St. George on Saturday with a few little things that were my fault; I could have ridden him a bit better. It was a big class though and we finished 4th so I was happy with that.

On Sunday I was back to giving him a better ride and we worked together and won the Intermediaire 1 with 68%! I am looking forward to riding him at his first CDI at Saugerties in August.

Fair Fiona W was good as always. She won both her second level classes again! She has been very consistent and i am sure she will make somebody very happy. I will move her up to third level soon.

-Silva
Posted by Amber Heintzberger at 9:01 PM No comments:

Rock on Rose has Sold! 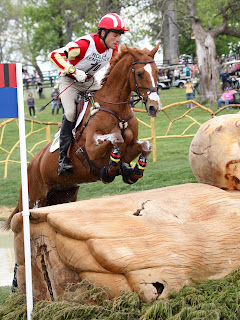 Lusty has found a new home with a young professional rider, Whitney Weston, out in Portland Oregon. Thanks to Hawley Bennett and Buck Davidson for acting as agents on the sale of this talented mare.

It has been an honor and pleasure working with Lusty and Bruce over the past 12 months……and I have gained invaluable knowledge and wisdom regarding the art of training horses through both of these characters! Although I am saddened to see this mare move on to a new career and rider, the goal from the beginning was to put her on the market.

Lusty and I had some wonderful rides and top finishes over the past year at the Jersey Fresh CIC 3*, Bromont CCI 3*, Richland CIC 3*……finally culminating with our remarkable 11th place finish at the Rolex 4*! In fact, Lusty’s recent finishes were so impressive that we were contacted within the past few weeks by the American selectors to discuss putting her on the short list. 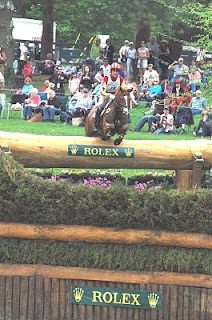 I must say that she is one of the most talented horses I have ever ridden. She had all the right ingredients..... guts and stamina in XC, style and class in the show jumping and plenty of character and finesse in dressage.

I wish her new owner all the best and look forward to seeing her compete at the upper levels for years to come. Again, I’d like to say a big thank you to Bruce and Susie for allowing me to train one of their own. Their experience and wisdom on how to prepare for a 3 day event will stay with me throughout my entire career!

Boyd
Posted by Lisa Thomas at 5:14 PM No comments:

Here are a few videos of Waranga, the young horse described in the previous blog post:

Posted by Amber Heintzberger at 9:25 AM No comments: