'Moe', who has been at the barn training for the past couple of months, has been sold to a Young Rider from the Midwest. The highlight of my brief competition career with Moe was winning the Senneca Valley Preliminary, and the low was falling off him at Plantation Fields International. He is a top class young horse who was possibly the best jumper we had in the barn. I have high hopes for his future, and really think he might be a horse that will make it to advanced. I wish the new owners the best of luck with him!!
Boyd
Posted by Amber Heintzberger at 4:29 PM No comments:

In the four-year-old gelding and stallion class Silva rode Fendi W. Fendi is a horse we bred in Australia that we imported last year. He went in and put in a good performance, finishing 4th. He is a top little horse that has got great movement and a good work ethic. The plan is to sell him this year.

In the five-year-old class Silva rode Laurie Cameron's 'Uma'. This mare is a real stunner! I only broke her in two months ago, but she looked liked an experienced campaigner. She has a wonderful trot, and an explosive canter. She finished in 3rd place. Now, I am no dressage judge, but I felt she was easily the best horse in the class. Poor judging!

Silva's biggest test of the weekend is today with Jeff in the Prix St. Georges. She rides in the main arena a 2 pm. The horse looks in good form, and is going the best he has ever gone.

-Boyd
Posted by Amber Heintzberger at 8:49 AM No comments: 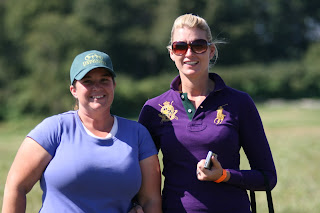 It's that time of year again: Dressage at Devon! Tomorrow I'm taking two young horses to the show. Uma is owned by Laurie Cameron and is a big, grey five-year-old mare. I love her: she's a beautiful mover. She had a foal and was broken in late, and because she has come so far I am going to take her in a materiale class.

I am very excited to say that Fendi is back in action. He cut his leg in the paddock so I chucked him out and let him get over the trip from Australia - some horses take a long time to acclimate and he was one of them. He's back and I have high hopes for him. He's also still for sale.

Jeff will compete in the CDI in the small tour and hopefully he will appreciate the arena more than he did in Saugerties! I've been working really hard with Jessica Ransehousen to turn him from a 20-hand horse into a 16-hand horse in the arena. He'll show Friday, Saturday and Sunday.

Sealord will be showing Fourth level. He's been doing really well in the PDG but I felt he was still a bit green to do that level at this show. In fourth level he feels confident now. He should be great - and he may be the only Thoroughbred competing here. I'll bet he's the only ex-racehorse!

Concorde, owned by Jeff Anderson, has gone up the levels so fast and has been winning at Prix St. Georges. He is also doing Fourth level at Devon. He's a really good competition horse and is even better at shows than at home.

-Silva
Posted by Amber Heintzberger at 8:39 PM No comments: 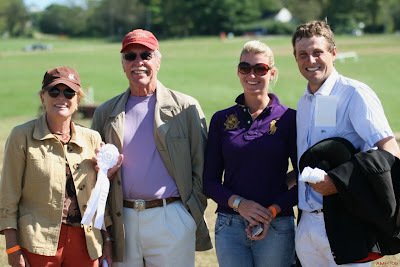 Minotaure du Passoir did fantastic this weekend - we jumped clear and he's looking like he might be prelim horse of the year for 2009, which has been a goal of Amy's and mine. He's got a couple more events on the calendar and I'm really pleased with him.

Remi (pictured at right) had one of his best dressage performances yet with a 45 and was as fast as he's gone around a three-star cross-country course yet. He show jumped well - they had a downhill combination with two verticals which is kind of his bogey so we had a couple rails but I'm pleased with him.

Shatzi has been going advanced but I just put her back to intermediate because she's a bit green and has been overjumping, so I will let her chill out the rest of the season.

Rock on Rose should have won her division but I had trouble getting her in the start box yesterday, which cost us about 30 seconds.

Neville's back in business and will do advanced at Morven.

Otherwise I rode sales horses in the prelim - Double Exposure has been going well but unfortunately I came into the coffin a bit quick and came off the side. Figaro is proving himself and I think I'll do a couple more prelims with him but my guess is he'll get sold in the next couple of weeks.

-Boyd
Posted by Amber Heintzberger at 11:11 PM No comments: