The View Between Remi's Ears 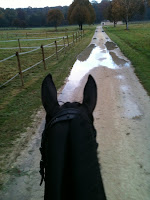 This is a view from Remington XXV taken by Groom/assistant rider Caitlin
Silliman. They went for a hack at a farm in Chantilly, France today.

Late this evening he received 20 liters of fluids. He boards the
truck first thing in the morning for a 12-hour trip to Pau.

-Boyd
Posted by Amber Heintzberger at 10:36 PM No comments:

I took Sea Lord and Duvent for a lesson with Jessica Ransehousen this morning. Both horses went well and I had good lessons.
Here is a little bit of each lesson:
Duvent:


Silva
Posted by Amber Heintzberger at 8:19 PM No comments:

Great Draw for Remi at Pau

For the starting list at the Pau CCI**** click here. Remi starts late in the day so Boyd will have plenty of time to see how the course rides.
Posted by Amber Heintzberger at 3:33 PM No comments:

Remi and Caitlin have Arrived in France 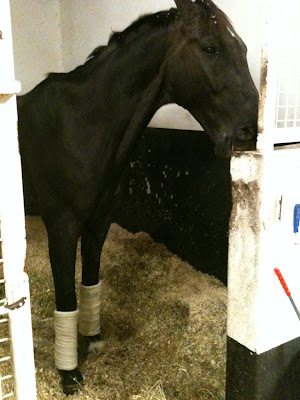 Remi and Caitlin arrived in Chantilly, France around 5:30pm EST and Remi has made himself right at home, cribbing on the wall of his new stall!
Posted by Amber Heintzberger at 5:58 PM 2 comments: 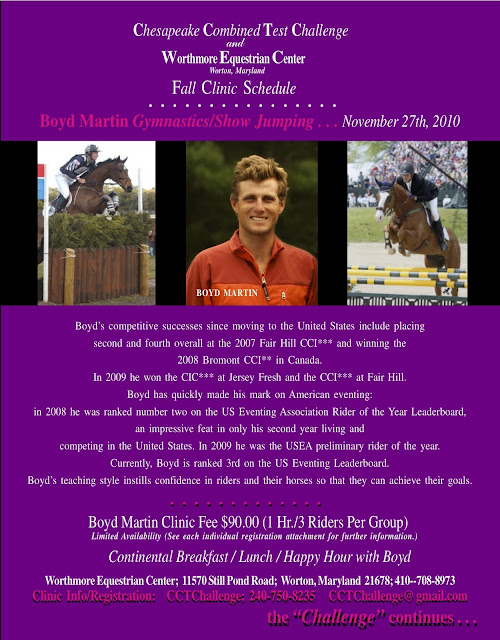 Posted by Lisa Thomas at 9:24 PM No comments: 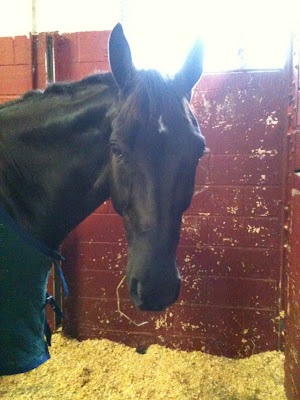 Remington started his marathon trip to Pau, a five day journey across two continents including a plane ride and truck ride to get to the final four-star of the year in Pau, France. The horse left yesterday morning at 6:30am beginning with a journey to the airport in New York City on a plane bound for Amsterdam. He gets straight on a truck from there to Chantilly where he’ll soak up a bit of French culture for a few days with his groom Caitlin Silliman. I think he’ll be eager to taste the French grass and I’ve instructed Caitlin to just hack him out walk him and stretch his legs. 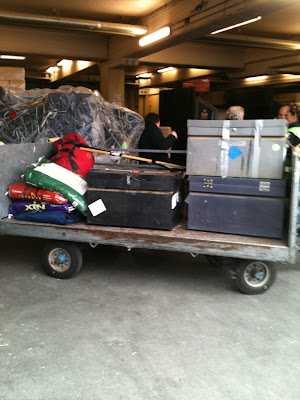 Lainey’s horse didn’t look one hundred per cent on the day of departure so our intended traveling companion is going to stay home and fight for another day. I’m good friends with Lainey so this was a blow to me as well since I was looking forward to sharing the experience with a fellow countryman. I understand Anthony Patch only has a niggling little injury and will come back 100%, but the drug rules are so strict in France that treatment of his aches and pains would not be possible before the event. 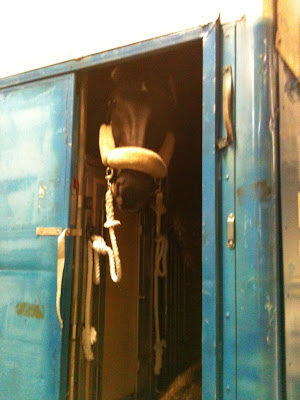 This is the first time in history that I won’t be riding my horse for five days straight leading up to a four-star. Usually this would terrify me, with a horse like Neville, but in a way it suits Remington perfectly as he’s a horse that doesn’t need a whole lot of work to get a good dressage test out of him and I think a little back-off in exercise will suit him just right. We gave Remi 20 liters of IV fluids before he left New York and Caitlin is going to find a vet in France to give him another 20 liters before he makes the trip from Chantilly to Pau.

I’m flying over from Philadelphia on Sunday, planning to arrive in Pau by lunchtime Monday. I’m a little nervous flying through Paris as there has been a bit of rioting over there so I plan to take my baseball bat and a few flairs to get amongst some of the culture on my arrival. As far as I understand our complete American crew, including the owners Ron and Densey, Silva my wife and Caitlin my groom have a total of two words in our French vocabulary: Bonjour and Merci. We’re going to see how far that gets us! 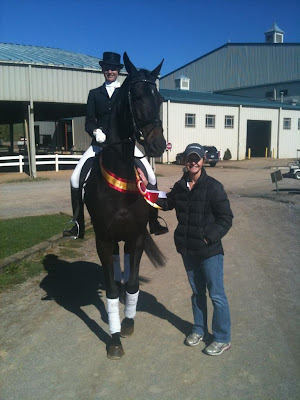 Reserve Champion Rosa Cha W gets a pat from one of her owners, Sarah Reese
Caitlin, Devon and I took Rosa, Sea Lord, Duvent, London Venture, Comet and Rembrandt,(Devon Seery’s horse; Devon is my new working student) to Lexington, Virginia for the CBLM Championships.

Friday we started with the training CBLM championships. Rosa was the last of about 38 horses to go and she was good, she’s a hot horse and was a little excited when we got there. I had to spend a lot of time showing her everything – I felt like I was at an event, she was so hot! She was reserve champion with 72%. It was great to have one of her owners, Sarah Reese there – unfortunately Jacky Gilbertson and Faye Woolf couldn’t make it but it was great to have Sarah there.

The next day Rosa did her first first level test and finished second with 71%, she was a little wobbly here and there but it was good for her first time at that level.

Also on Friday was the 2nd level CBLM champs. I rode London Venture in the morning and Duvent in the afternoon; that was also a big class and the championships were in the big coliseum. London Venture was a little spooky – not bad but it made him tense and he finished 8th which was still a good result for him. Duvent was also a little tense – you could hear a pin drop there was so much tension in the coliseum but he was good and finished 3rd.

Larry Smith and Melinda Walton and their friend Pam Murphy came out to watch us go and they were very happy with Duvent; we also had a great time with them!

On Saturday I had Sea Lord in the PSG finals at 8:00 at night. It was under lights in the coliseum and he was really good. I kind of let him down because I made an error, which is so stupid because I’ve ridden the PSG test so many times! It’s a CDI and the judges commented on the tension in his top line. I agree with that and worked really hard to get him relaxed and supple. I changed my warm-up a little and he was so good, and he still has room to improve. He finished 4th and would have been 2nd without the error. It was a strong field so we couldn’t afford to make a mistake, but I did. Overall the test is getting to be how it should be so I’m excited with his progress.

Also on Saturday Devon rode her final in the junior training division. She’s a very talented young rider; she’s not very experienced but she has a nice horse and we’ve been working hard. She was reserve champion out of more than 30 horses and I’m very proud of her!

Sunday morning poor Sea Lord, who had his awards at 10pm Saturday, had to be in the ring at 8am – we had to pull him out of the stall at 6am, thank God he’s a thoroughbred! It’s not like him but he was a bit tired from the whole thing. He was still good, though I lost the trot a bit because I had to push him, which is unusual. Neither of us made any mistakes but it’s always a little bit of a disadvantage to be first in the ring. We scored 63% and weren’t in the ribbons, which was disappointing, but I was happy with how he went. I know he’s going to be a grand prix horse; it’s easier for warmbloods than thoroughbreds but I know he can do it. Shannon Stimson and her husband came to watch and had to leave home at four in the morning to catch our ride! It was great to have them there watching us.

Sunday afternoon London Venture was in the 1st level final. He was much better than the first day. He scored 64.7% and finished outside the ribbons.

Devon had another exciting result in the 1st level Junior championship. She was so nervous because it was probably the biggest show she’s ever been in! She went in the ring feeling so sick, but she held it together and rode beautifully and won the championship. She jumped off her horse and ran to the bathroom after the test to be sick, she was so nervous, and we were all laughing and giving her a hard time about getting so nervous but it was a great result for her!

Comet was good, he did the 3rd level champs on Saturday and scored 62%; I was a little disappointed with that and we were just out of the ribbons. On Sunday he was in the 4th level and did a good test, but he gets a little excited and quick in the canter. As soon as the judges see that tension they give a lot of 6’s. He finished 7th which was good since he’s green at that level and there was a lot of competition.

Complete results from the show are available here.

Today I’m heading to Maryland to teach a clinic and next week we’re off to France where Boyd is going to ride Remington at the Pau CCI****!

-Silva
Posted by Amber Heintzberger at 12:19 PM No comments:

Remington XXV and Boyd Martin to Compete at Pau CCI4* 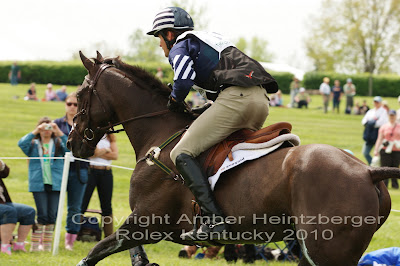 It's a real honor for my longtime partner Remington and I to receive a traveling grant from the USEF to go to to the Pau CCI4* in France. Remi has been training hard since he a couple days off through the WEG, where he was left off the team as an alternate. Basically he’s been in fantastic form all year since his first four-star at Kentucky. Not only has he been placing well, including second place in the CIC3* at Richland but he’s been improving in all three phases week in and week out.

Traveling to another country to compete in a four-star is a huge thrill and I feel like there is added pressure since the Federation has coughed up the majority of the funds for the trip. Ron and Densey’s horse is in top form and if all goes well with the conditions and the trip, I’d be pretty disappointed to finish outside the top ten.

We’ll be accompanied by Lainey Ashker on Anthony Patch who also received a grant from the USEF. The horses will fly out from JFK next Wednesday at 10pm. Remington will be accompanied by Caitlin Silliman who will be his chaperone through the flight to Amsterdam and the truck trip from there to Pau. I plan to meet Remington and Caitlin in France on Sunday after they have had a day or two of rest to recover from the trip.

Ron and Densey and Silva will also make the trip over, depending on how much rioting is still going on in France.