palaMountains Welcomes Silva to Their Team! 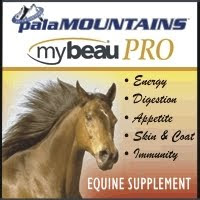 palaMOUNTAINS scientific animal nutrition welcomes Silva Martin to our team of successful riders and horses who count on palaMOUNTAINS for balanced nutrition and peak performance.
The all-in-one products are a liquid blend of Omegas 3 and 6, Vitamins A,D,E and B-complex, selenium, garlic and yeast and other valuable synergistic nutrients. Our formula was designed by veterinarians and scientists to make a complete supplement that is bio-available and supports the entire body. The palaMOUNTAINS products have been shown to boost the immune system and promote a healthy digestive tract.
Our exciting MyBeau PRO has Creatine added for muscle development, nervous sytem health and promotes stamina. The popular Bone and Joint with Glucosamine and Chondroitin Sulfates is designed for joint and cartilage health to help horses in heavy training or those predisposed to joint problems. And our wonderful Pre-Boost and Revive are formulated with electrolytes added for hot temperatures, travel & recovery with Pre-Boost in particular for use before and after strenous exercise.
Samples are available for a limited time if interested or to order contact Pam Hill at (240) 626-0129 or pam@aragoninternational.net.
Posted by Lisa Thomas at 8:21 PM No comments: 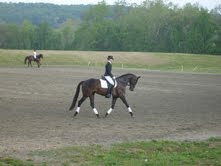 I showed at Morven Park this past weekend with Jeff the Chef W , Rosa Cha W, Fair Fiona W, Sea Lord and Comet V and we had a great weekend!

I am so glad that Jessica Ransehousen and I decided to start showing Jeff in Intermediaire 2 and Grand Prix this season. We decided that I should just show him at national shows this year so that he has time to get used to the new tests before we go to the CDI's. I feel like Jeff is easier to ride and tries harder for me in these more difficult classes because things are coming up so fast that he has no time to get long on me.

He was good in the Intermediare 2 on Saturday, and then on Sunday I showed him in the Grand Prix and he was a star! Of cause we are still green in some of the movements but he was trying so hard for me.He got mostly 7's for all of the piaffe and passage, 8's for two time and one time changes, and 7's for his canter pirouettes. We won on 67.2%! Very exiting!!!

Morven Park was Rosa Cha W's second recognized show (she is pictured above and at right). She is such a nice mare: she is beautiful to look at and

moves amazingly well. I loved riding her at the show because she is very brave and does not spook at anything. She is a pretty hot horse but has a very good head and loves her job. Since she is only four years old she is very green in the arena, but she held it together for both tests.bWe finished third both days in training level with 65% and 68%. I am looking forward to her our career together.

I also took our mare Fair Fiona W, who had 2 babies in Australia before we brought her over here. She was a good girl. We finished second in first level on Saturday on 67% and won the second level on Sunday with 68%.

Sea Lord was good as always! We had a good Prix St. George, but For the first time the judge did not like him that much. But that's OK since that happens hardly ever. We finished 6th. On Sunday we finished second in the Intermediaire 1 with 65%.

On Sunday we did fourth level test 3. That is a new test for Comet and it's a hard test, but he did very well. I am was especially proud of him for getting the 4th and 3 time changes! We finished second!

Silva
Posted by Amber Heintzberger at 9:33 AM No comments: