Boyd and Silva Martin Join Purina as National Ambassadors
Purina® horse feed fuels the Martins’ award-winning horses
GRAY SUMMIT, Mo., March 19, 2012—Boyd and Silva Martin, rising stars in equine competition, have recently joined Purina® horse feed as its newest National Ambassadors. Purina National Ambassadors are riders and their equine athletes who compete in various international and local events. These top-performing equine athletes are fed a diet of various Purina® horse feeds.
As Purina National Ambassadors, Boyd and Silva Martin will participate in some of the country’s most illustrious eventing and dressage competitions, respectively, including the Rolex Kentucky Three Day Event, Badminton Horse Trials and Saumur Horse Trials. In five years of competition in the United States, the Martins have amassed an impressive number of achievements and bring a winning pedigree to the Purina National Ambassadors team.
“It’s an absolute honor to be riding under the same banner as Beezie Madden, Laura Kraut and so many other equestrian sports leaders,” said Boyd Martin. “I feel results speak for themselves. I’m looking to see my horses succeed this year, thanks to the feeding technology of Purina® horse feed.”
The Martins identified Purina® Ultium® Competition horse feed as a favorite for the performance horses in their barn. Boyd Martin noted that the three-day events in which he specializes require a significant endurance level, and Ultium® Competition horse feed helps provide his horses with the energy required to train for these demanding events. They also rely on Purina® Strategy® Professional Formula GX and Equine Senior® horse feeds for some of their other horses.
“I’m riding some of the highest quality event horses in the world, and for them to compete at their best possible level, they need to be fueled by the best feed in the market,” said Boyd Martin. “And the best feed in the market is Purina® horse feed.”
Starting this spring, the Martins will begin representing Purina at high-profile events. Boyd Martin is currently in contention to represent the United States at the 2012 Summer Olympics in London. He can be seen participating with several of his horses in the Rolex Kentucky Three Day Event on April 26–29. He also will compete in Olympic selection trials with one of his most promising horses, Neville Bardos, a 2011 United States Equestrian Foundation (USEF) Horse of the Year and USEF Eventing High Performance Training “A-List” member.
Silva Martin also represents the United States in international events and was recently named to the USEF High Performance Dressage Developing List with Faye Woolf’s Stately. She has several horses of her own, including Jeff the Chef W, who is preparing to compete at the Grand Prix level.
About Land O’Lakes Purina Feed, LLC
Land O’Lakes Purina Feed, LLC (www.landolakesinc.com) is a national organization serving producers and their families through 4,700 local cooperatives and independent dealerships throughout the United States. The company, in combination with its wholly owned subsidiary Purina Mills, LLC, is North America’s leading feed company, providing producers, cooperatives and dealers with an extensive line of animal feed, ingredients and services designed to help agricultural producers, dealers and cooperatives compete in the global marketplace.
For more information, contact:
Sarah Hoffer
Colle+McVoy
612.305.6182 sarah.hoffer@collemcvoy.com
Chris Goodwin
Land O’Lakes Purina Feed
636.742.6291 clgoodwin@landolakes.com
Posted by Lisa Thomas at 5:21 PM No comments:

We were able to catch up this week with sponsor, Theault-America, who have been kind enough to provide Boyd and Silva with one of their cutting edge horse boxes since November of last year.

The concept of rear facing horse travel is new to this country, although strongly supported in the European community where it is recognized that horses travel much more comfortably in this position.  After all, their strength is in their hind quarters, so the ability to balance on "their engine" helps provide a much more secure ride for our four legged partners.

The Morpheus horse box is more than a trailer, it a safe and secure way for both horse and rider to travel in comfort, offering every amenity to the serious amateur or busy professional.  The vehicle design is nothing like we have seen here in the US, and the company is looking to grow their US sales and distribution.

Boyd and Silva have been instrumental in giving feedback to the company on the design of the existing 2 horse Morpheus and the 4 horse version which is planned for production in the near future.  To learn more about this cutting edge horse transportation company, please visit Theault-America's website , check out their new US brochure and come to visit them at Rolex Kentucky.

Enjoy this fun video produced by Theault while working the circuit at WEF. 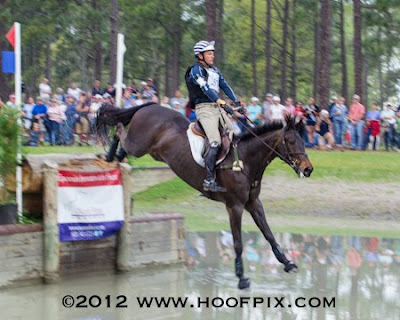 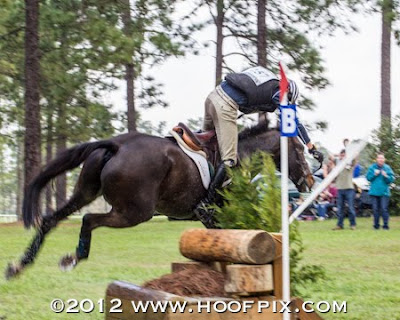 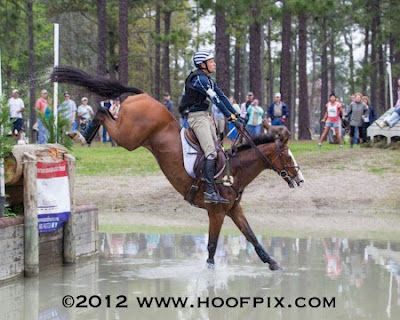 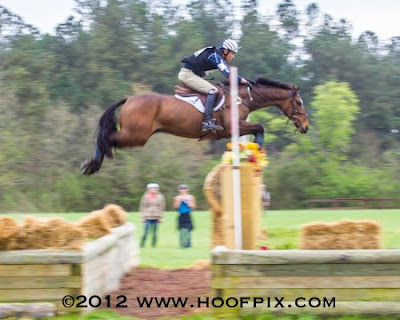 Thanks to Pamela Eckelbarger for sharing these photos from Southern Pines Horse Trials II. All photos ©Hoof Pix® Sport Horse Photography, LLC and are for use only on this blog posting.
Posted by Amber Heintzberger at 6:55 AM No comments:

Southern Pines was a fantastic event for the upper-level horses. The cross-country definitely tested some of my greener horses and the old faithfuls managed to dance around it unscathed. Unfortunately Crackerjack and Cold Harbor, who both moved up a level recently, misread the water jump; this was no fault of their own but a sign of their greenness at this particular level.

I chose to run Neville, Remi and Ying Yang Yo in the intermediate horse trials to give them a nice easy taste of eventing before I start running them at the Fork. Anne Hennessey’s New Cadet is improving with every start, having begun his intermediate career a couple of events ago. He’s already feeling like a seasoned campaigner. The Flying Frenchman, Otis Barbotiere showed signs of brilliance as well with a good, positive run in the advanced horse trials. 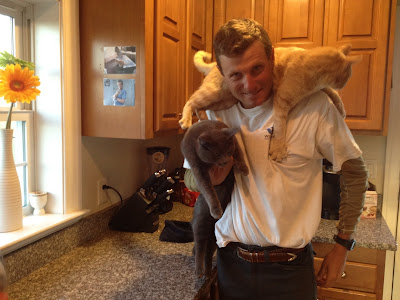 As much as we love Aiken it was wonderful to get back to the farm in Pennsylvania and be reunited with my two show cats, pictured above. They were both thrilled to see me walk through the door at midnight on Sunday.

Work back here is underway with all the young horses looking good and aiming for Plantation in a couple of weeks. The advanced horses will all aim for The Fork at the beginning of April. Looking forward, Ying Yang Yo, Remington XXV and Otis Barbotiere will be going to Rolex, with Neville Bardos, Cold Harbor, Merging and Crackerjack aiming for Jersey Fresh.

More photos coming soon - meanwhile check out the videos below