Fernhill Figaro was sold to an up and coming rider from Texas this past week.  The sale was set up by my good friend Courtney Cooper from C Square Farm (www.csquarefarm.com) whom has been the agent for a number of sales that Silva and I have gotten done this year.

'Fig' was a great horse to have in the barn for the couple of months that he was here.  Silva competed him successfully in straight dressage, and I ran him around a few horse trials.  The new owner looks to be a good rider and I wish them both well.

Posted by Lisa Thomas at 7:19 PM No comments:

To read the script from a very candid, educational and entertaining live chat with Boyd, moderated by John Thier on www.eventingnation.com, click here.

John commented after the chat, "Boyd is funny, a little controversial, intelligent, and always straightforward in person, so that's exactly what we gave you tonight. I was flat out laughing several times and I hope you were as well. At Eventing Nation, we are operating at the very edge of technology, of news, and of inside information. Some people might be afraid to take risks, but we are not. With the Fair Hill live blogging and Boyd Martin as our guest tonight, we have set the bar very high for future content. I look forward to rising to the occasion."
Posted by Amber Heintzberger at 10:13 AM No comments:

Boyd co-hosted the Eventing Radio Show for the first time this week. Click here to listen in as he and Chris Stafford discuss the Fair Hill International three-day event.
Posted by Amber Heintzberger at 9:51 AM No comments:

Join us on  Thursday 10/22 at 6:30pm for a live blog with Boyd and www.eventingnation.com.
A live blog is a chatroom style format converstion with Eventing Nation, Boyd, and his fanbase.  Come join the fun & have the opportunity to interact with one of the top event riders in the nation!

Also check out Nancy's article on Equisearch.com
Posted by Amber Heintzberger at 7:30 PM No comments:

Check out Silva's video footage of Boyd at Fair Hill: 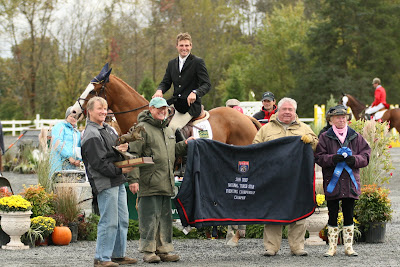 Boyd and Neville Bardos won the CCI*** and placed sixth on Remington XXV. After his winning ride Boyd grabbed a celebratory beer and sat down for a quick update:

I just wanted the horse to jump well, I felt in the warm-up he was full of life and making a good shape in the air. I wasn’t worried about having rails down, I just wanted him to jump well. I think if you get stuck on the result and the mathematics of the course rather than riding as well as you can. I basically want to ride as well as I can and focus on each jump.

For me personally I have come second a number of times in [CCI] three-stars, and finally I have won one. I’ve won a one-star, two-star and four-star before and it was eating away at me a little bit. I’ve come close and just couldn’t quite do it so I had a little pressure on myself because it was a mark in my life.

Neville’s a tough mongrel of a horse, a lot of the horses here today were not fancy show ponies – if you saw them as people they’d be barflies. When it comes down to a gladiator style fight you get the tough horses and riders, the ones who can man up when things aren’t perfect.

Remington came out and jumped a fantastic round – that was nearly more of a highlight for me than winning the event because at Richland and Wits End we had terrible show jumping rounds. It goes to show that good hard focused riding does pay off – you’ve got to be careful not to label a horse a bad jumper. I take my hat off to Phillip who’s helped me with the horse to jump a clear round, also a rewarding moment for Ron and Densey Juvonen, who have been supportive through disappointing events where we had a chance to win or come second but had a train wreck in the show jumping. Not once did they give me a hard time, they stuck through and I’m happy about the way the horse jumped today.

It’s rewarding beating Karen and Phillip just because they are true champions for so many years. It does come down to the best horses in the game and this competition suited Neville because he’s such a hearty number and it was tough conditions and a tough course.

I think the WEG is a long long ways away – I have three or four horses that have a shot at it but to start thinking about making the team now is a big mistake, I need some good performances and sound horses and to keep improving the stock that I’ve got and at the end of the day it’ll work itself out.
Posted by Amber Heintzberger at 4:08 PM No comments: