Sorting through the stock....

This morning Silva and I ventured out to the Carrolls Ranch, an equestrian facility just ten minutes down the road from my parents' farm. The head trainer, Stevie Shakoff, who used to be a working student for us here in Australia, has two of our horses in work.
Enyo W, (pictured below), a three-year-old chestnut gelding by the Hanoverian stallion Escudo out of a Brilliant Invader (Reddy Teddy's sire) / Silvineer mare, looked fantastic. This little champion has it all: nice type, great mover and a sensational jump. I am very excited about this guy and we plan to import him over to the States in March of 2010. 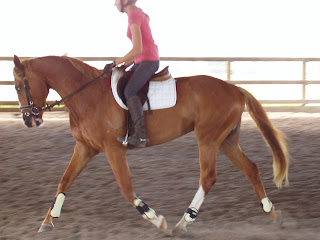 Vroom W, (pictured below), is a grey, four-year-old Warmblood/Thoroughbred mare by the Belgian Grand Prix show jumping stallion Vivant. This mare was a little bit of a disappointment to us. She is a nice enough type, but really did not have very good movement for dressage. She is a little small as well. I suppose the great thing about her is that she has an incredible jump, great technique and plenty of scope. After a long think, I rang my good friend and Grand Prix show jumping rider, James Mooney, who will take on the horse to start its jumping career. 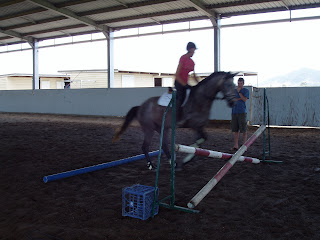 At the end of the day, Silva and I are only intrested in bringing over top class event and dressage horses. If the horses we have bred aren't superb, its great to have riders like James that can produce the horses to a high level here in Australia and then sell them.

-Boyd
Posted by Amber Heintzberger at 6:11 PM No comments: 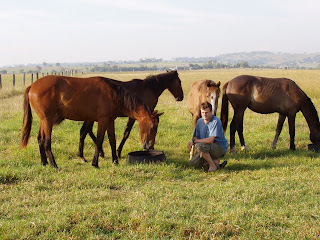 Silva and I arrived in sunny Australia yesterday morning. Nice warm weather, about 80 degrees. After checking in with Auntie Jan, (my number 1 fan) in Sydney, we drove up to Lochinvar, which is about 2 hours north of Sydney in the Hunter Valley. My mum and dad own about a 160-acre farm where we still are breeding horses. There are about 30 horses still there, some of which are being selected to come over to America. 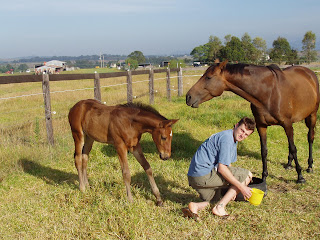 I haven't seen my breeding stock in over a year, and I must say I am impressed. My most favorite horse in the world is my mare Fair Fiona W. I plan to bring her over in March next year to resume her eventing career. She won the Sydney Three Day event as 5-year-old. She has just had the most impressive foal I have ever seen. He is by an American thoroughbred stallion called Raza Stanza and I have named him Ray Price after a great Australian footballer. 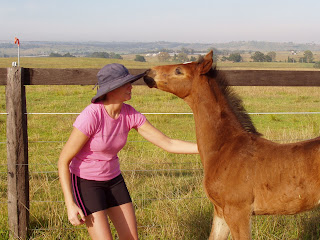 Silva was also excited to see the horse she plans to ship over to America this year. Her name is Rosa Charm, (I think), and she's a three year old by Regarde-Moi (Rubinstein). She is just about to have a foal by His Highness. 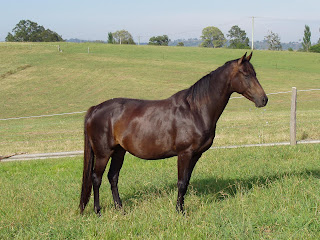 Posted by Amber Heintzberger at 5:50 PM No comments:

Click here to see Boyd jumping over a couple of Minis.
Posted by Amber Heintzberger at 7:24 PM No comments:

The USEA Convention was a huge success this year, with a lineup of fantastic seminars that offered something for everyone in attendance. The convention took place at the Astor Crowne Plaza "Hotel on Canal Street at Bourbon Street, and there was plenty of fun to be had after hours as well.

Boyd said, "We had a fantastic time hanging out and socializing with riders, sponsors, and owners, attending the awards luncheon and the forums."

Television presenter Pam Forrester and videographer Joel Silver conducted a session on Friday morning and Boyed said, "Probably the most impressive session I attended was the Media Forum where the presenter gave advice on how to give an interview under pressure - she gave examples of good and bad interview techniques and advice on how to deal with media in positive and negative situations that arise in eventing.

"The Young Event Horse forum was also productive and one of my injections into the conversation was that we need to try to score the horses that win as the potential upper level horses rather than the fancy-looking ones that will never make it to a four-star. There were a lot of productive comments during this session."

Boyd was lucky enough to secure a sponsorship agreement with helmet and body protector manufacturer Charles Owen during the weekend, and Silva enjoyed some time with her new sponsor, Back on Track. Boyd and Silva also had dinner with Bit of Britain's John Nunn, who had very rom 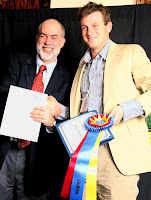 antically proposed to his girlfriend Annie over dinner the night before.


With the honor of receiving the Preliminary Rider of the Year award, Boyd had cause to celebrate at the luncheon. (Photo, left, of Boyd receiving the award from USEA President Kevin Baumgardner, Amber Heintzberger photo). Boyd was also grateful to Jimmy Wofford, who emceed the event, for announcing that Boyd will be riding for the United States from now on.

It was the hours after the convention that kept most eventers entertained...Bourbon Street may never be the same after the likes of the USEA membership swept through its bars, jazz spots, strip clubs and casinos.

"The best part was sampling the wild life on Bourbon Street," exclaimed Boyd. "The best was the saloor bar with the mechanical bull, which I tamed. Silva and I also did quite well at the casino. I loved the jazz bands and the musicians performing in the streets. In our free time we just soaked up the atmosphere."
Posted by Amber Heintzberger at 12:59 PM No comments:

There's a new addition to the Windurra herd! Mademoiselle Chanel was born on December 13. She is a beautiful little filly by Jive Magic (Jeff's dad) out of Felicity (Fendi"s mom) Felicty is by Wolkenstein 2. She's a very stylish girl: black with four white socks. 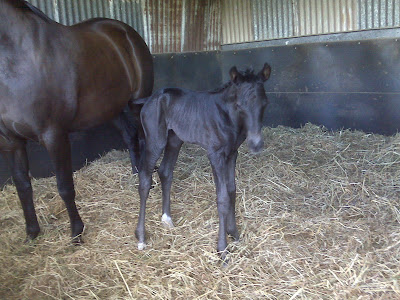 Posted by Amber Heintzberger at 11:01 AM No comments: