Boyd and Minotaure du Passoir second after cross-country at Bromont 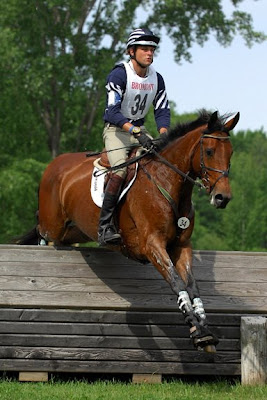 Boyd and Minotaure du Passoir, owned by Amy Lindgren, maintain second place after cross-country in the CCI* at the Bromont three-day event in Montreal, Canada. Photo by Andrew Bailini.
Posted by Amber Heintzberger at 10:08 PM No comments:

The Bromont Three Day Event Organizing Committee is ecstatic to announce a higher than expected turnout for the 23rd edition of the The Todd Sandler Challenge held June 11th to 14th, 2009 in Bromont Quebec.

Over 100 FEI (Fédération Équestre International) horses are registered with another 40 at the national level. The best around North America will be here next week to compete in the highest level competition in Canada. The competitors include Olympic and world equestrian games (WEG) competitors such as Kelli McMullen-Temple, Philip Dutton, Hawley Bennett, Boyd Martin, Waylon Roberts, Carl Bouckaert, Darren Chiacchia, Sharon White as well as several up and coming riders preparing for the North American Young Riders Competition in August 2009 taking place in Lexington Kentucky. This 3 * competition is being used as a qualifier for various North American as well as European vents leading towards the world games next year.

This is the largest entry experienced so far at this high level in Bromont includes competitors representing Canada, the U.S., France, Belgium as well as Australia!. An added feature this year is the introduction of the Greenbrier Farm Team Cup. This friendly team competition gives the CCI riders an opportunity to come together in a friendly team competition.

The fact that internationally renowned course designer Derek di Grazia, (USA) has once again designed the CCI 3*, CCI 2* CCI/CCI JY 1* and CIC 1* courses coupled with the expertise of Canadian course builder Jay Hambly, have had a positive impact on the entries this year. The avant-garde course received rave reviews in 2008 by riders, coaches and officials from Canada, North America, Great Britain and New Zealand!
Posted by Amber Heintzberger at 11:36 AM No comments: