This is an amazing opportunity to own an upper level eventer at a very reasonable price.  New Cadet is a talented competitor and will take his next owner to the top of the sport!!  He is a first-class event horse that is probably best suited to a more experienced rider. He is an awesome cross country horse with a lot of heart and has only received one cross country jumping fault in his whole career! He just moved up Advanced level, placing 11th at 5 Points September 2014. He is ready to carry on with a competitive upper level rider!

Check out his full sales listing with video on our website and set up an appointment!

Neville Bardos is Back! 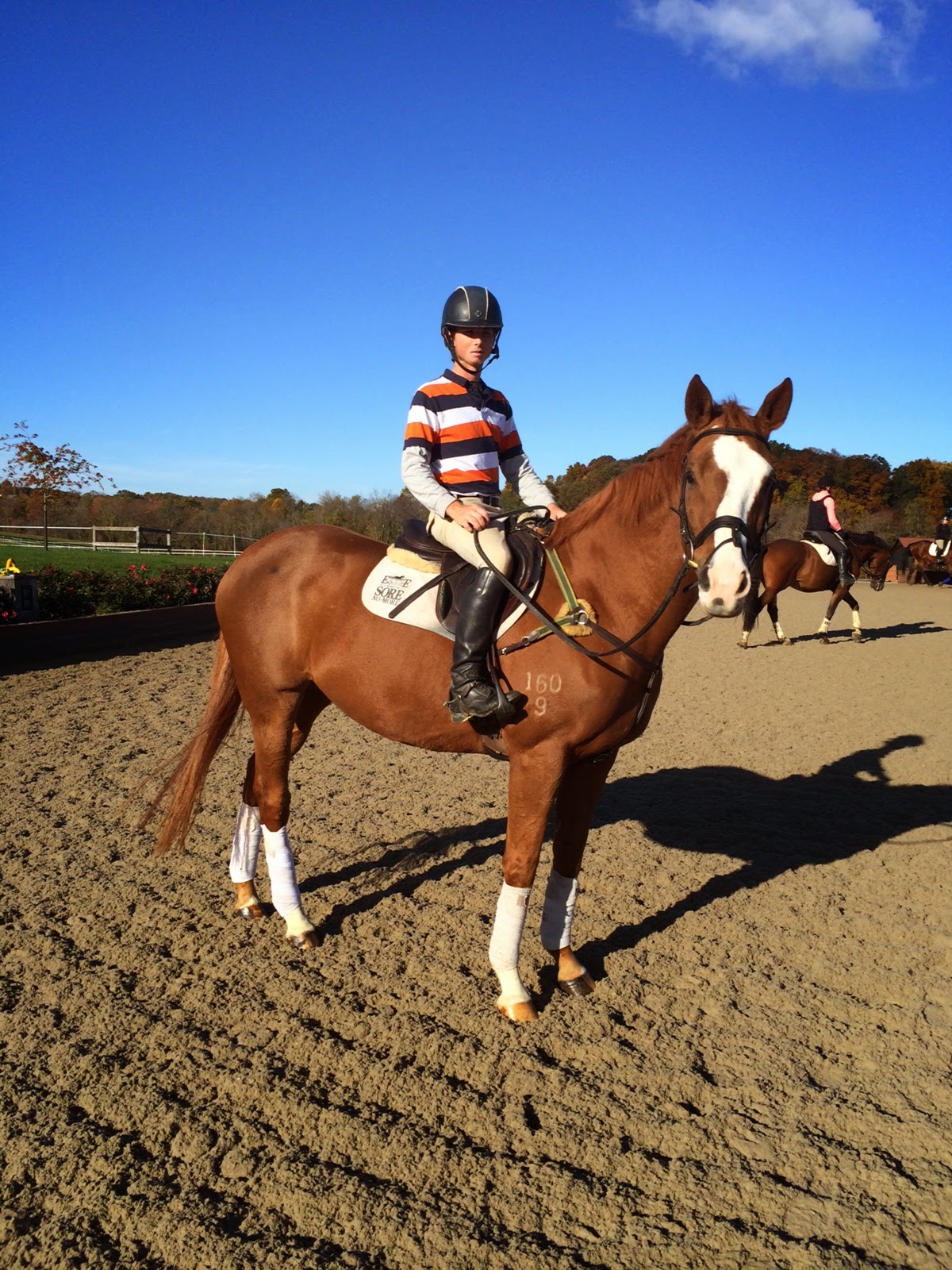 Big Nev is back in work!  He is looking in fantastic condition, mainly due to the fact that he has been living the good life at Hotel Wintersteen. George and Gretchen have been wonderful, having Neville at their farm here in Unionville over the last 10 months. He has got great weight, his feet look super, and his spirits are high.

I have had young Mike Pindleton hacking him for the last week, mainly due to the fact that I was worried that Nev might throw me off since he is feeling so good.  My plan is to really take my time bringing him back into work. He looks in good nick at the moment, and should come back well.

Dr Kevin Keane had a look at him the other day, and agreed that it would be probably wiser to aim him at new career with a younger rider at the lower levels.

-Boyd
Posted by Amber Heintzberger at 8:31 AM 4 comments:

Unfortunately Oscar finished his year of 'highs and lows' at Galway Downs, in Temecula, CA with a disappointing result. I can't tell you all how heartbroken I am to tell you that out trip out west did not quite go to plan.

He shipped out there in good health and looked in great condition leading up to the event. We were very fortunate to have him stabled at Tamie Smiths farm down the road for the first few days while we prepared for the event. Tamie and her staff were awesome hosts and really looked after us well. I hope to return the favour when the West Coasters come out our way.

Galway Downs is a super event with a real international feel. I would encourage any rider who is looking to gain experience to invest in a trip out there to compete, instead of going overseas first. It's basically the same experience, for a third of the cost.

On Friday we put in a good test. The trot work was great, picking up 8's and 9's from all of the judges. We lost a few marks on the halt-rein back as Oscar was a little unsettled with the atmosphere. The canter work was pretty good, although we did do a late-behind flying lead change, which was expensive. We ended up on a score of 44, which had us sharing the lead with Buck.

The cross-country course was not that tough considering the tracks Oscar has gone around in the past. It was a legitimate three-star course that was on mostly flat terrain. It did pour with rain the night before, which made the footing quite heavy in places.

I set out pretty quick, as I felt like we were there to win. In hindsight it may have been a little too quick considering the conditions. We were jumping all of the fences out of stride and Oscar was feeling very keen. At each minute marker, we were well ahead. At around 4 minutes I decided to slow him a little between the fences as we were doing it a bit too easy.

At about 7 minutes he started to feel a little tired. He kept running well, but I could feel his jump lose its power a little. We jumped through the toughest combination, which was a bounce into water. and he struggled a little to the C element. We pressed on, and I slowed the speed to see if he would freshen up.

At around the eight minute mark there was a very big ditch and brush into water. Oscar was not responding well enough to my leg, so I decided then to call it a day. I hopped off and loosened the girth and had the lonely walk back to the finish with my old pal Oscar, who had given everything he had. Funny enough he recovered pretty quickly, which is something I can't understand.

Obviously this is heartbreaking. He has all of the ingredients for the best event horse in the world except this one important factor. To be honest, I don't want to make any decisions about his future for a couple of days until I get home.

I suppose we are competing at the very top end of the sport, where it's not meant to be easy.