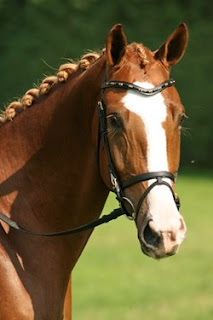 We're off to a good start at the BLM Championships in Lexington, Virginia. First off, I've been riding in my new saddle from L'Apogee Saddlery, who just agreed to sponsor me, and it's really comfortable!

On Friday Wasabi Rosa, (pictured above, Amber Heintzberger photo), owned by Nina Gardner, won the warm-up class for the Training championships with 72% and was reserve champion in the final with 73%. It was very close - the winner had 73.6%! There about 45 really nice horses, a lot of stallions, which can be hard to beat. It really was a selection of the best horses in the country and she did very well against the competition.

We drove down on Wednesday and I rode them all on Thursday. Wasabi needed some time to get used to the place; on Thursday she was wild and excited, but once we braided her she settled in, it's amazing how she knows her job. Her classes were held in the indoor Coliseum and even though she can be spooky sometimes she did not spook, she was just a little more "up", which was good.

I also rode the three Third Level horses in their warm-up class, which was outdoors. All the footing is very good. Ballatale, the Irish gelding owned by Sarah Sanz, scored 69%, which is a great score for him, and placed 5th. He jigged a little in the walk but the other parts were good.

Shannon Stimson's big Thoroughbred gelding Sea Lord scored 73% and placed second. He was like a ballerina, he was excellent!

Waimea, Margaret Marano's mare, was good, but I think she needed one more day here - she wasn't spooky and she didn't make mistakes, she just wasn't quite herself. She scored 68% and placed 5th which is still a good score but I hope she scores better in the final.

As far as atmosphere, yesterday there was not much activity, but I think today there will be a bit more. Today I'll ride the three horses in the Third Level final and Jeff will do the Fourth level warm-up.


-Silva
Posted by Amber Heintzberger at 8:39 AM No comments:

Preparations for the BLM Dressage Championships 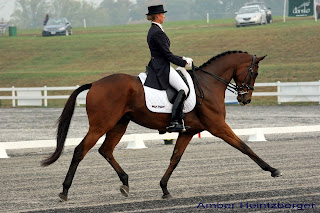 This coming weekend is the Colonel Bengt Ljungquist Memorial Championships at the Virginia Horse Center in Lexington, Virginia. I’m taking six horses, and they are all very good competitors.

Wasabi Rosa (Dutch by Jazz out of a Farrington mare), Nina Gardner’s horse is doing the Training level championships and is going really well. She’s going better than before Bucks County, and she was champion there. I checked the draw and she’s got a lot of competition in this class, which is good and not good – she’ll have to go really well. There are a lot of good horses entered, a lot of imported horses – for some reason training level is packed with really nice horses - but she is going well, which is exciting.

DP Lidcombe (by Luebeck out of a Thoroughbred mare), Janet Mudge’s horse, is doing First level. He hasn’t been to a show since the PVDA show which was in June. He some time off because he had a little cut on his leg but now he’s back in business and feels good. I hope he’ll do really well; the judges like to look at this horse, and it’ll be nice for Janet since she’s over here watching from Australia.

I have three horses in the Third level. The first is Ballatale, (Irish Sport Horse), Sarah Sanz’s horse. I teach Sarah on him every week and about a week before the competition he comes to me. I never know what to do with the horse because he’s just so easy to ride!

Waimea, (Canadian Warmblood by Wallenstein), Margo Marano’s mare, is doing Third level as well. She competed in Fourth level at Bucks County for the first time but I moved her back to Third for the championships. Since she’s been doing Fourth level, the stuff at Third is real easy for her and she feels great.

Sea Lord, (American Thoroughbred by Sea Hero), (pictured above, Amber Heintzberger photo), owned by Shannon Stimson, is the next in Third level. He’s one of my favorite horses and I’m very excited about him because he’s so spectacular; he always feels even better in the ring than in the warm-up. I haven’t competed him in a while because he kind of got used to doing the Third level test. The last show I did with him was Saugerties, in New York, where he won both classes. I gave him a break because he’s a Thoroughbred and very smart and was starting to know the tests better than I do, which is not very helpful!

Our Windurra horse, Jeff the Chef, (By Jive Magic out of a Salut mare), is doing Fourth level. He is coming from his really good performance at Devon, so hopefully he’ll go just as well or maybe even better. I have high hopes for him even against tough competition, so hopefully he’ll do well and then move up to Prix St. Georges.

It will be a busy week with six horses but I am taking Caitlin and Lucy to help me and I have a really good feeling about it. I’ve had a nice preparation; when you come from a show like Devon it feels like everything is going well. The Virginia Horse Center is a nice facility and there’s not one horse that I’m taking that I don’t feel is going really well.


-Silva
Posted by Amber Heintzberger at 2:14 PM No comments:

Remington XXV,(pictured right, Amber Heintzberger photo), trotted up perfectly first thing this morning – the horse was full of high spirits and had a sparkle in his eye and I knew he was ready for a show jumping performance that would be remembered. It was a tough, demanding track but the former dressage queen from Germany pinned his ears back and put in a foot-perfect round. Unfortunately the majority of horses ahead of him did too, so we held our fifth placing. I couldn’t be happier with this horse, he proved himself to be top class. I was really happy for the owners, Ron and Densey Juvonen – they have supported Silva and I and Remington this last year and a half and it’s developed into a great friendship and partnership, with a great result this weekend.

Che Kairo (pictured left, Amber Heintzberger photo), jumped reasonably well in the three-star; he was a little bit flat and tired from yesterday. He started around well but then towards the last line of the course he started to feel the pace of the weekend and had a couple of lazy rails. This was a fantastic effort for the horse, which has now qualified for the four-star level and the 2010 World Equestrian Games. The Ecuadorian owner Ronald Zabala is half considering keeping him as his backup horse for next year. There are also a few interested parties for his sale.

Belmont II (pictured right, Amber Heintzberger photos), jumped fantastic in the first two thirds of the course and then got a little bit rattled towards the end. Unfortunately I feel I could have ridden him a little bit better down the last line where we picked up a few rails. At the end of the day he finished in sixth place out of 53 starters in an international three-star three-day event, competing against Olympic and World Champions. There has been some interest in his sale from some overseas buyers and it will be interesting to see where that progresses.

All in all, it was a reasonably successful Fair Hill International three-day event, not only for myself but for a lot of the people that Silva and I are involved with. I feel like everyone who is related to a similar training program stepped up and put in a respectable performance. It was heartbreaking to watch Molly Rosin just nick a rail in the two-star, which cost her a win. She’s a great girl riding a top horse and I’m sure we’ll see more stunning performances to come in the future.