Rosa and I had a pretty good test this morning, but I have to say I am a little disappointed because I did not ride my best and Rosa did not go her best. I know that we can do better!
We scored 66.55%, which had us finish fourth place.I am not exactly sure what happened -- I guess I was a little nervous and I could have collected her more at times, and Rosa felt a little behind my leg today.
But of courseI am still so very proud of Rosa, since she is so young and the Rolex Arena is a big stadium with a lot of atmosphere. I tell you, it is very hard to get it all right in the only six minutes that you have to ride the test! But tomorrow we will do our best to show what we really can do.
Michael had a great ride on Victor this morning and won the Grand Prix CDI!

Michael's wife, Vera Kessels Barisone, also rode in Rosa's class and finished second on a 67%. Vera is not only a beautiful rider from the Netherlands, she also deserves a medal for being married to Michael! :-) All jokes aside , Michael and Vera are great people and are helping me a lot!! THANK YOU! 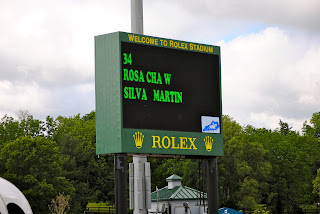 Posted by Amber Heintzberger at 3:54 PM No comments:

A big thank you to my good mate Mike McNally for all of his photographic contributions over the years.  Since retiring from the Md. police department, Mike has taken a serious obsession with equestrian photography and is a true talent.

Mike was good enough to send me a few snaps of the advanced horses from The Fork HT and Rolex Kentucky this year.
If anyone out there is looking for high quality photos of their horses, be sure to give Mike a quick email on Mikejmcnally@aol.com or call him directly at 301 829 6759!
Thanks again for all your photos from over the years....you've been very generous to both Silva and I.

Photos from Day One at the Kentucky Dressage Assn. CDI 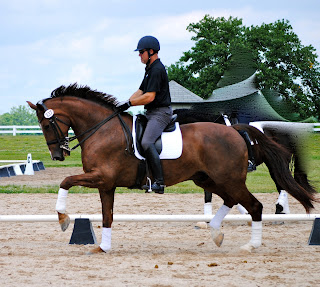 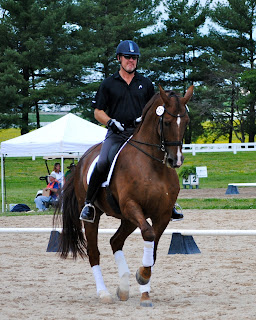 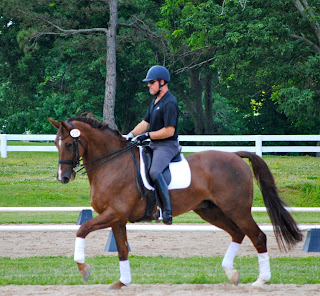 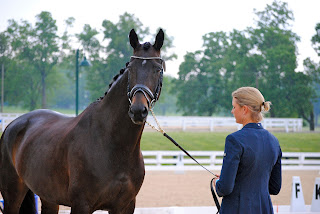 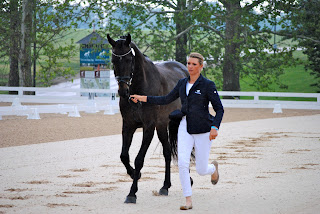 Posted by Amber Heintzberger at 5:51 AM No comments:


I worked with Michael this morning at the Kentucky Horse Park and Rosa was great! She loves the Rolex Arena, with all the atmosphere.

Michael is riding a different horse in the CDI, but he’s been riding Jeff the Chef for a while now; they are a perfect match, both big and strong!  I hadn’t seen Jeff go in a while and he looks fabulous. We want to sell him because he’s really too big for me, and Michael is looking to put together a syndicate so that he can keep the ride on him. Heath Ryan bred Jeff in Australia and Boyd bought him as a foal. I brought him up through the levels to Grand Prix, and it's exciting to see him going so well. I think that they have the potential to go to Normandy together and it would be so exciting if we could potentially have a couple of our horses there!


Rosa was her princess self at the jog: she loves every aspect of competition including the jog; she stands very still for the judges, pricking her ears and posing for the photos so that went really went. It was raining so we got wet at the jog, but it’s supposed to be nice all weekend.

Rosa and I are the first to go after the break tomorrow morning at 9:27 in the Prix St. George. She’ll do the I-1 on Saturday and the I-1 Freestyle on Sunday. "Girl on Fire" by Alicia Keyes is our music, put together by Anne Miller. She did a beautiful job putting it together. This will be our first time riding it and I think it’s going to be great. Usually by Sunday the horses are a bit tired but I think that with the music in the arena Rosa will be great, I’m looking forward to it.

Due to uploading problems the photos will be posted separately.

Posted by Amber Heintzberger at 8:59 PM No comments:

Rosa Cha in Kentucky to Compete in CDI 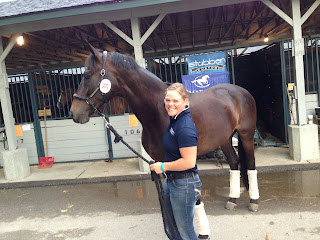 Michael Barisone and his wife Vera are also competing in the CDI. I worked Rosa with Michael this morning in the Rolex arena; the trot up is at 5pm.

Here is a recent video of a lesson on Rosa with Michael at home in PA. Videos from Kentucky coming soon!


Posted by Amber Heintzberger at 2:30 PM No comments:

Horse Junkies United caught up with Boyd getting some show jumping from the sidelines today at the George Morris Training Session at USET Headquarters in Gladstone, NJ.

LINK
Posted by Amber Heintzberger at 2:17 PM No comments:

Modern  Eventing with Phillip Dutton is now available for purchase! Boyd wrote the Foreword for this book that is full of expert advice from his longtime coach and mentor, Phillip Dutton.

Modern Eventing with Phillip Dutton
The Complete Resource—Training, Conditioning, and Competing in All Three Phases
Phillip Dutton with Amber Heintzberger


Click HERE for the Table of Contents and a Sample Chapter


The fabulously illustrated book covers training, conditioning, and competing in all three phases of eventing as well as full chapters describing the special needs of the event horse, with tips and advice from the top experts who make up his internationally respected eventing team.

Everything You Need to Excel in Eventing!

Posted by Amber Heintzberger at 7:33 AM No comments:

Congratulations to Beau Guimond on JYOP Win at Fair Hill! 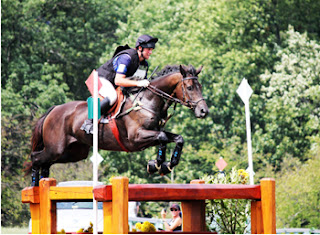 A huge conrats must go to Beau 'Guey' Guimond for a very impressive win in the Junior/Young Riders Open Preliminary at Fair Hill horse trials on the weekend. Beau smoked a quality field at Fair Hill in his final outing before taking part in his first international threeday event at Bromont, Canada in a few weeks. He performed super on all three phases at Fair Hill, sending a clear message that he means business for his up coming challenge north of the border.