Silva and Jeff the Chef are competing at the Saugerties CDI this weekend, not in September. She had the jog yesterday and is doing the PSG today, Intermediaire tomorrow and the Freestyle on Sunday. Stay tuned for updates!
Posted by Amber Heintzberger at 9:16 AM No comments:

Silva will be competing at the New England Dressage Association Fall Festival in Saugerties, New York this September, and has a little preview of her preparations.

I will be taking Jeff to Saugerties and have been taking him to Jessica Ransehausen for training. She’s helping me so much to put the finishing touches on the Grand Prix. His piaffe/passage is coming along beautifully and the flying changes are really good. Jessica is good at taking the test apart and making it perfect. Jeff almost knows everything, it’s just a matter of putting it all together. Jess is so good at working every single step in the test – you kind of get good at the movements and then she pulls it all together. She’s also in Unionville, so she’s really close to home.

Jeff actually didn’t like the venue at Saugerties last year: they have a big loudspeaker and he bolted from it last year! But he is a different horse now. It’s exciting to have a horse that I have brought along myself; he’s still green but he knows all the movements now. He came up through the levels pretty fast, and he feels much more confident than a few months ago.

After the Small Tour at Saugerties I am skipping the BLM Championship to focus on the international classes.

I also got my freestyle put together. Jeff Anderson is a musician and put it together for me. The music includes Abba’s “Dancing Queen” and “Mamma Mia”. It’s so much fun and Jeff loves moving to the music!

-Silva
Posted by Amber Heintzberger at 11:41 AM No comments:

On the road back to Pennsylvania from north of the border, Boyd called with an update from the Wits End Horse Trials and CIC***-W in Mansfield, Ontario.

Remington XXV did a good dressage test with the majority of movements as good as he's done. I fumbled both of the changes and the walk, but we were not far off the leader. He was good on cross-country too and jumped well, but I didn't gallop him flat out so we had a few time faults. The show jumping course was huge; I didn't ride him as well as I could have and he got backed off a bit in the ring and had a few rails. Obviously I am going to keep working away with him. (For complete results from the CIC***-W click here).

Benwald had a great dressage test and was tied for second place in the advanced but he was really would up on cross-country. I had a few nasty fences and got away with it, but half way around the course I misjudged the double offset houses and landed on my backside, so that was the end of that.

Shatzi is still a bit green so I took my time with her on cross-country. She jumped double clear and placed second, so I was ecstatic with her.

Rock on Rose was a bit of a handful in the dressage but was good on cross-country. She jumped well but had two rails down and finished 5th.

Buck Davidson is on fire at the moment; both his horses looked unreal. Phillip's top horses, Tru Luck and Woodburn, looked in a league of their own - Tru Luck should be heading to Burghley, which is exciting. Wits End was a top class event with an electric atmosphere in the dressage and tough courses. It was a good place to showcase the horses.

-Boyd
Posted by Amber Heintzberger at 8:40 PM No comments: 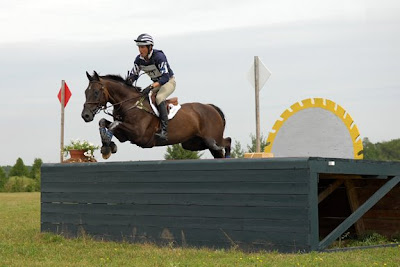 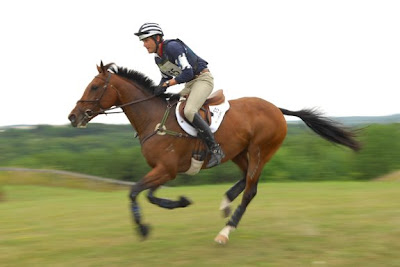 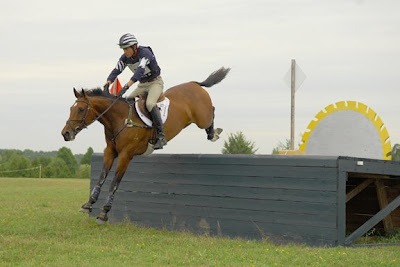 Shatzi W
Posted by Amber Heintzberger at 12:19 AM No comments: