Boyd had a great day with all six horses at the Fair Hill International Three-Day Event, and maintains the lead in the CCI*** with Stephen Blauner's Master Frisky. Read all about it on EN:
http://eventingnation.com/home/boyd-martin-and-master-frisky-hold-fair-hill-cci3-lead/

We'll have the full run-down and more photos at the completion of the event, so stay tuned!
Posted by Amber Heintzberger at 8:27 PM No comments:

Boyd and Mikey in The Chronicle of the Horse

From The Chronicle of the Horse:

October 17, 2014
Martin And Master Frisky Move To The Top Of Fair Hill CCI***
By: Lindsay Berreth 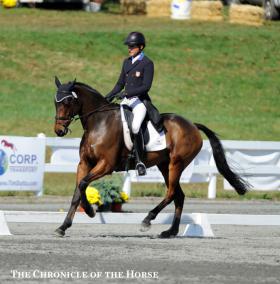 Boyd Martin is used to riding multiple horses at every event he goes to, but when he brought six horses to the Dutta Corp Fair Hill International, most contesting their first CCIs, he knew he wasn’t going to have it easy.

Luckily, Master Frisky made Martin’s job easy in the CCI***, taking the top spot after two days of dressage (43.1).

Continue Reading....http://www.chronofhorse.com/article/martin-and-master-frisky-move-top-fair-hill-cci
Posted by Amber Heintzberger at 8:02 AM No comments:

Master Frisky has the early lead at the Fair Hill International CCI*** with 43.4 penalties and no room for error on cross-country tomorrow to maintain the lead;  Pancho Villa is 6th on 47.4 and Steady Eddie and Crackerjack are hanging in the top 20 with 51.4 and 52.6, respectively.

The Chronicle of the Horse

Cross-country times are available HERE
Posted by Amber Heintzberger at 8:12 PM No comments:

All the horses passed the trot up yesterday and all of them look in great form. Below are the times:

We are blessed to have Melinda Walton and Larry Smith as clients of Silva's, and they continue to breed exceptional young talent!!  We have two of their home bred prospects here in training with Silva and they are both on the market.  Don't miss this opportunity to invest in a fine young horse who can take you to the top of the sport!

Bruiser's Dam, MS Portiana, is an elegant German import by Prince Thatch, undoubtedly one of the most important English Thoroughbreds chosen to lighten and modernize the Hanoverian breed.

Also by ES Bonheur, Bruiser's half-brother, Benefactor RRS has been trained and competed by Silva Martin to great success. Benefactor's accomplishments include: Region I Champion at Training and Second Level, Reserve Champion at First Level, BLM an GAIG Champion at Training, First and Second Levels and 5th Place in the National Young Horse Championships. In 2013 he was honored as the American Hanoverian Society's top 5 year old with a median score of 8.3 with multiple wins in his classes at Dressage at Devon!

Bruiser shares not only the same exceptional breeding with Benefactor RRS, but also the same easy temperament and personal presence. Just started under saddle in the fall of 2014, Bruiser is displaying an exemplary work ethic and considerable athleticism!
Video of Bruiser's First Ride in the Dressage Ring!

Demitasse RRS, aka "Demi", is an elegant, extremely feminine in type filly, with a wonderful temperament and a diva personality deserving of all the attention she rightfully deserves!

Demi's American bred sire, Donarwiess GGF was champion of his 30 day test and first place in the American Hanoverian Society USDF All Breeds Awards and has won several Regional Championships, including the FEI Levels.

Donarweiss GGF is by De Niro, the 2008 Hanoverian Stallion of the Year, who is described as "the embodiment of the Hanoverian stallion" with a legendary career. De Niro is by the incomparable Donnerhall, one of the greatest foundation sires of the 20th Century.
Demi's Dam, MS Lanthana, is by HLP Lanthan, by Lombard. Lanthan, having the highest breeding value in his age group, is now known for producing upper level dressage horses with elasticity of movement and ground covering gates.

With impeccable breeding combined with a sweet disposition and graceful movement, Demi should prove herself to be an effective and engaging competitor in the dressage ring. Recently started under saddle in the fall of 2014, Demi is displaying a willingness to please and is upholding her genetic legacy!

Video of first time under saddle in dressage ring!
Posted by Lisa Thomas at 2:37 PM No comments: