Both Remi and Otis galloped around the Boekelo cross-country course clear. Remi had a hard time with the muddy going and copped 16 time penalties to drop from 8th to 32nd place; it's a tight, competitive field and any faults are costly. Otis really stepped up and showed that he's a horse for the future: he added only 4.4 time faults and moved up to 23rd place from 55th after dressage. It was a tough day for Team USA, and both Mike and Tami rode well but are out of the running.

With 110 horses entered and 200,000 spectators Boekelo is a truly awesome event and a showcase for the sport. For complete results click here for the Leaderboard and be sure to check back tomorrow for the news after show jumping. Also have a look at the USEF website to follow the US eventing squad's adventures in Europe, with lots of great photos and videos.
Posted by Amber Heintzberger at 7:58 PM No comments:

Boekelo Dressage: Remi 8th and Otis 55th out of 110 Horses 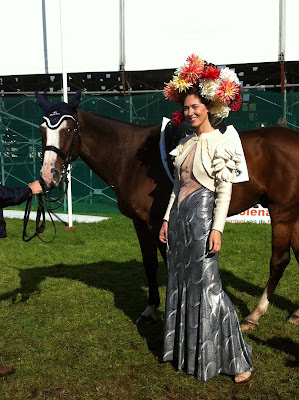 Otis Living the High Life in Holland
After two days of dressage at the Boekelo Three Day Event I am placed 8th on Remi with a 46.8, and 55th on Otis on a 55.6. It was a huge field of 110 horses which saw a fantastic display of competition. 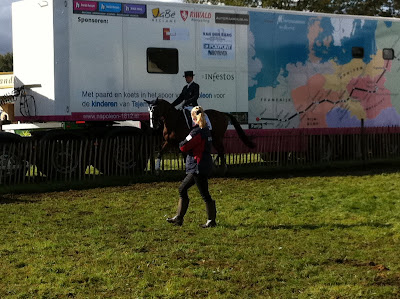 Warming up Otis under the watchful eye of Bettina Hoy
I am happy with both horses' tests. As with most dressage rides there were parts that were great, and parts that could have been better. Otis showed he has got plenty of talent, but is still green at this level. Remington proved he is a champ being in the mix amongst some top combinations. 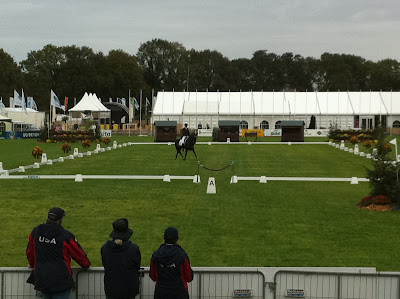 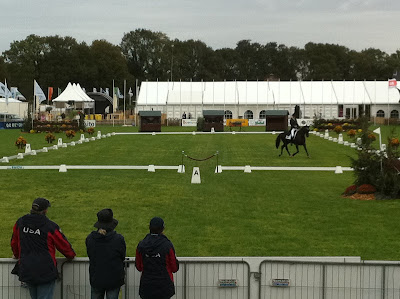 Remington XXV
Mike and Tami rode great. Both horses oozed with promise, which left our team in 5th place. Team USA gets on well, with a couple of course walks and team dinners to bring everyone together. 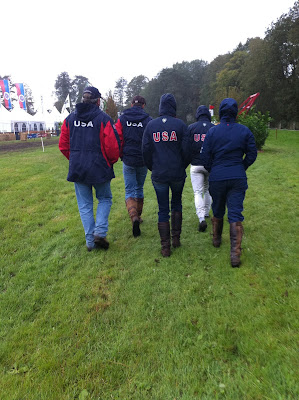 Team USA walking the cross-country course
with Capt. Mark Phillips and his daughter Zara Phillips
Tomorrow will be a tough day cross-country with the conditions wet and muddy. I am looking forward to getting out there on both geldings to see how they get on.

Boyd
Posted by Amber Heintzberger at 1:21 PM No comments: 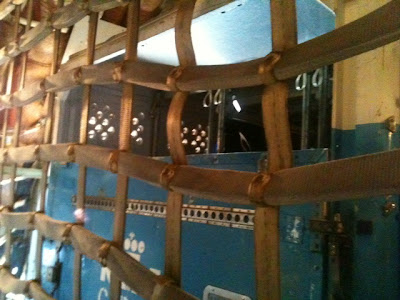 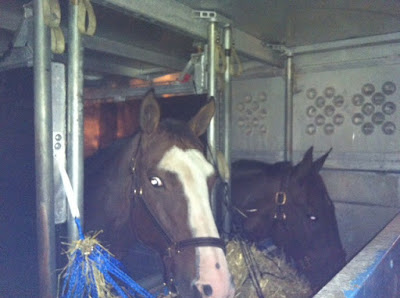 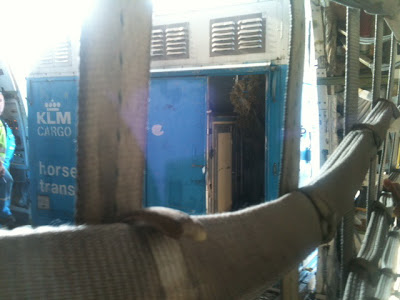 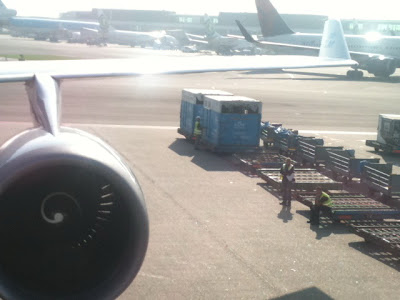 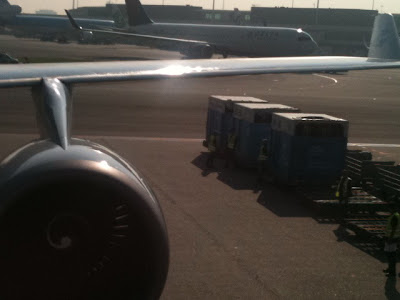 Posted by Amber Heintzberger at 10:06 PM No comments:

Video of Silva and Aesthete at Devon

Posted by Amber Heintzberger at 2:39 PM No comments: 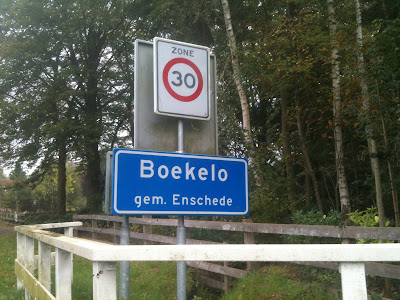 After a marathon trip from Morven Park to Amsterdam, which included canceled flights, diversions through Manchester, and a mini-van ride from BWI to Philly, it was great to arrive in Boekelo to meet up with my pair of horses Remington & Otis.

Both horses look in good health after their trip. Head groom Lindsey has got them looking magnificent, and they would definitely be contenders for the best turned out award in tomorrow's trot up. Mike Pollard and Tamra Smith's horses also look the part, and worked well today. 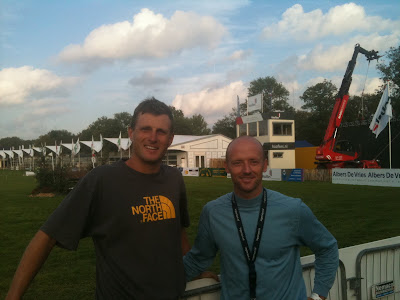 Boyd and Mike Pollard
I chose to gallop Remi and Otis both lightly yesterday afternoon when I arrived. I got the feeling on top that both geldings are about right. Mike and I worked with Bettina Hoy on the flat today and she kept it pretty simple: improving their gaits, working on their flexion, and perfecting a few movements from the test. 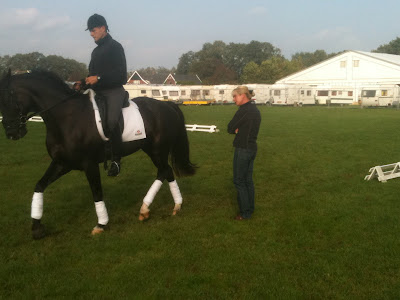 Lesson with Bettina Hoy
Captain Mark Phillips gave me the news today that Remington would be the horse I will be riding on the USA team in the Nations Cup. I agree with the call, as he has a few more miles under his belt than Otis. It is also a great feeling to get called up on a US team with Remi, as last year he missed his chance due to Neville's selection for the WEG. Unfortunately the USA will have only three horses on the team due to a few last minute injuries.

Tomorrow, we trot up and check out the course.

Dressage at Devon: WE ARE BACK !!! 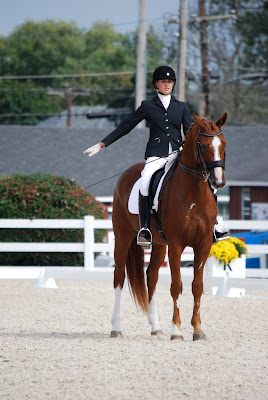 All photos from MidAtlantic Equestrian Services
After a horrible horrible year for Boyd , myself and all our girls things are looking up for us again! After Neville did so amazingly well at Burghley and my dressage crew had such an amazing weekend at Dressage at Devon, we feel like WE ARE BACK FIGHTING AGAIN.

Overall at DAD we had 5 wins, 5 second places and one fifth place, we won two championships and one reserve champion.

I am so happy about this weekend! My horses went so well for me. I know that Stately and Duvent are very good horses a but I have to say they could not have tried harder for me. It was almost like they knew we needed something good to keep me going after all the horrible things that happened this year. 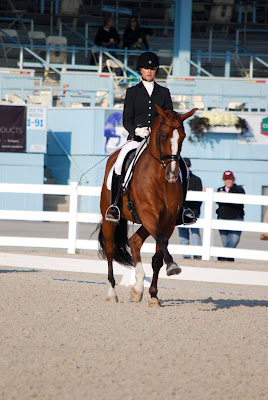 Stately of course did his best, but that is nothing new to us. He is a truly amazing horse and Faye and I feel so lucky that he has come our way. I know he is going to do a lot more and greater things for us!! 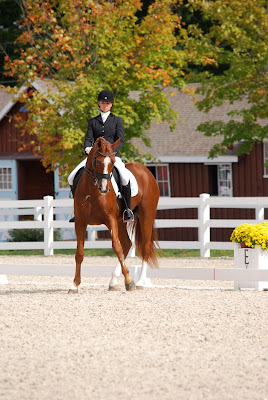 Duvent
Now, Duvent! Duvent really was the star of the show for me this weekend. As everybody knows he has not been the easiest to bring along as a younger horse. I have been working to so hard at getting him stronger but especially to understand the way he thinks. Duvent is a very strong minded horse and he can get worried at times. Day after day after day I have been trying so hard to understand him and step by step he started to trust me and now, finally, we are working as a team!

It was the most amazing feeling getting to the last halt in our first test on Thursday. It was in the big Dixon Oval and I had been worried about Duvent getting worried in there. As we went around the ring I could not believe how confident he felt.

He did such a nice test and listened to me the whole time. As we finished our last extended canter and turned onto the centerline for our final halt, I got goose bumps because I could not believe he did what he did for me. He was so proud of himself as everybody cheered us on! I am so very thankful that Melinda and Larry hung in there with Duvent and me!

Kymmy and Markie also had such a nice test on Thursday; I am so proud of the two of them . They have come a long long way and that they qualified for DAD for a great achievement. They did the best test they could have done for where they are in their training, and they finished in the top 10! The two of them have a lot more great successes to come! 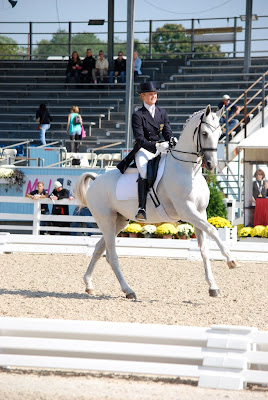 Ashlea and Mintie
Ashlea, Ashlea, Ashlea!!! One thing is for sure: it is never boring with that girl. Mintie and Ash did very well this weekend, but let me start with the first (and probably best award) they won. We took the horses to DAD on Wednesday to school them at the show grounds and Ash and Mintie went to the the arena to have a quick ride. We always have to save Mintie's energy.

People say that dogs look and act like their owners or the other way around. Well, it's like that with Mintie and Ash: they are both beautiful, but they are also both princesses as well. Mintie is very delicate and has to be handled with care, same as the owner!

Anyway, when they came back to the barn, a lady from DAD followed her back and presented her with the "Best foot forward AWARD" . She told Ashlea the committee thought she was the most positive rider in the warmup. I have to say I have never heard of such an award, but I think it's great! So Ash was given great prizes and had her picture taken with a big smile!

On Friday they had they first test. Like all of us after the fire and everything else, Ashlea had fallen into a bit of a hole with her riding and Mintie had problems with his health. On Friday was the first time that Ash and Mintie were back to normal. Ash rode better than I have seen her ride before and Mintie looked great!! They deserved every little bit of that win.

They had a good test on Saturday too. Mintie was not as fresh but they finished second. On Sunday was the big one: the Freestyle. This was the last qualifier for Ash and Mintie to go to the Young Rider World Cup in Germany. They needed to score a 70%.

Mintie warmed up great and Ash rode super. They had a very nice freestyle, the music worked out great, and they looked good. Unfortunately Ash did one three time change in the four's and one two time change in the three's. Those were two very expensive mistakes, and they scored 67%. That was very disappointing for Ash but things happen for a reason and I know she has bigger and better things ahead of her!

I would also like to give a huge thank you to Devon Seery, who took care of the horses at DAD and of course takes care of them every day at home. She did an amazing job and we could not have done what we did without her! Devon will be at DAD competing next year, I know it!!

Now I am off to cheer Boyd, Remi and Otis on at Boekelo! Fingers crossed!


Silva
Posted by Amber Heintzberger at 9:35 AM No comments: