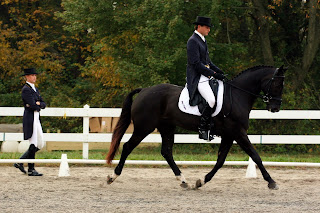 Remington XXV (in fifth place in the CCI** with 50.3), put in the test of his lifetime. We had a couple little mistakes but he was as good as I’ve ever had him. He struggles with the walk, and the first half-pirouette in the walk he got tense and thought I wanted him to canter, so we had a little bobble there. It was the best score I’ve had with him at an FEI event and I could not have asked for more.

Che Kairo’s (20th place in the CCI*** with 66.7), trot work was basically spot on but he got a little tired and strung out in the canter. The thing that hurt the most is that I fumbled both changes, but he’s a bit green in the changes and I think that with a bit more training they’ll be good.

Looking at the cross-country course I think it’s challenging. The course is up a mountain and then down a mountain. Remington can jump anything but has never run this distance before. Being a warmblood, I plan to look at how he’s going after a bit and gauge how he’s feeling. If he feels good I’ll get on with it, but if he’s getting tired I’ll just get him home. He’s been galloping hills and doing lot trots so I feel like he’s as fit as he could be. 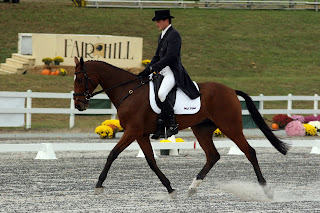 Che Kairo is an Argentinean Thoroughbred and he’s a tough horse and a naturally good galloper. Because it was a late decision to bring him to the event he missed some early gallops so again I will have to see where he is on the course and bring him home carefully if I have to.

The new two-star course looks brilliant – it’s the first year they are running a two-star and it shares a few fences with the three-star. The jumps are pretty tough and technical but the hardest thing is where they are placed on the terrain. The trickiest part for Remington will be that he’s a bit green on cross-country so I will have to try to show him the jumps a bit.

Silva’s and my student Molly Rosin is leading the two-star and she made a very good effort and had a great test. Her horse is in fantastic form. I’ve jumped him a few times myself and he’s awesome, a lot of fun.

Tomorrow I’m riding Belmont in the three-star. He’s rockin’ and rollin’; I worked him twice today and he looked fantastic. He started feeling a little flat this afternoon, so I’ll take him for an easy walk tomorrow morning. Of course then I risk him having too much energy in the afternoon, so it’ll be the art of walking the tightrope tomorrow. 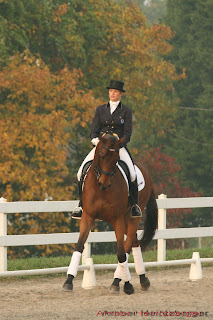 Silva performed the early-morning test ride on Shannon Stimson's Sea Lord, aka Big Bird, and showed the eventers how it's done!
Posted by Amber Heintzberger at 11:01 PM