Boyd to Ride for USA! 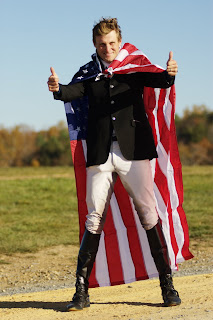 Boyd Martin to Ride for USA!

Following an outstanding competition year in which he finished second overall on the USEA/Nutrena Rider of the Year leader board, Australian event rider Boyd Martin has made the decision to change nationalities to officially represent the United States in equestrian competition.

Boyd and his wife Silva have lived in the U.S. for two years, and since Boyd’s mother is from the United States he has dual citizenship. Boyd and Silva plan to remain in the United States, so Boyd has formally declared to the FEI that he will represent the US in future competitions. Silva, who is a German citizen, has filed the papers to change her citizenship as well.

“In a sense I’ve already got a family tie to American representation, because my mum represented the U.S. in the 1968 winter Olympics in speed skating,” said Boyd. “When I told them I was thinking about making the switch, both of my parents thought it was a great idea. Since I’ve been an American citizen for the past 15 years it was just a case of changing my nationality as a rider, but it’s still a big deal; when I contacted Sara Ike, the USEF High Performance manager for eventing, she made it clear to me that as far as the FEI is concerned, you can only change once.”

One reason for the change is that Boyd and Silva both have many American owners, and they feel that it is more rewarding for owners to have horses represent their own country.

“They put a lot of effort and money into it, and American owners are American patriots that want the opportunity to represent their country,” said Boyd. “Silva and I love the country and the sport here and we have both decided to continue our careers here, probably for the rest of our lives, so we want to support the sport in the United States.”

Boyd reassured his friends back in Australia that his decision was nothing personal: “I rang and informed Wayne Roycroft before my decision went public and informed him personally. The point I really wanted to make clear to Wayne is that it was a decision that was nothing to do with Australian selection. I have never, ever felt I have been treated unfairly by Australian selectors. At then end of the day, I have chosen to move my life and career to America as a professional event rider and I feel I will be in a stronger position being an American rider, riding in America.”

He also recognizes that changing nationality is a long ways from getting selected for a US team. “I realize I have to come up with great performances on top-class horses to achieve my goal of representing the US in competition,” he acknowledged.

Based at Phillip Dutton’s True Prospect Farm in West Grove, Pennsylvania, Boyd and Silva’s business focus is on competing, training, lessons and sales. They also have a breeding program in Australia and import several horses to the United States each year. Silva has had tremendous success competing in the USDF Young Horse program and their homebred gelding Jeff the Chef won the Fourth Level Championships in 2008.

Boyd is planning to bring over a few special horses and is seeking owners to take part in this journey. “Part of my big focus this year is trying to get some people involved with some of these horses that I own in Australia and have picked to bring over to America as potential team horses,” he commented.

In 2008 Boyd’s competitive successes included winning the CIC** at Bromont (Canada) riding Galileo, finishing 9th at the Rolex Kentucky CCI**** on Neville Bardos, and winning the Intermediate Gold Cup at the Stuart Horse Trials on Bailey Wick. Capping this stellar year, he and Remington XXV placed fifth in the CCI** and Belmont placed fifth in the CCI*** at the Fair Hill International three-day event in October. Boyd currently has several horses competing at the upper levels of eventing, so 2009 should be another exciting year, this time representing the USA.

For more information or to contact Boyd and Silva go to www.boydandsilvamartin.com
Posted by Amber Heintzberger at 5:50 PM