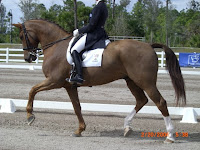 This past weekend I competed three horses at the Wellington Classic. Jeff did his first Prix St. Georges on the first day, and though he was still green and it was a big, competitive class, he was good in the trot and just had a few small mistakes in the canter. He finished ninth with 63% in that class and on Sunday he came back and competed in a special Prix St. Georges for 7-9 year-old horses. He was still green but really good; he didn't make any mistakes, but I could feel him getting a little tired with the whole program by the canter. There were a lot of good quality horses in the class and Jeff finished second, with 69%, to the winner, Cabana Boy.

I showed Prosecco for the first time, at fourth level, and he's so quiet and so good. We still have to get to know each other so we had a couple of little mistakes, but they weren't his fault - sometimes he didn't understand what I was asking, so it's just a matter of spending more time together. He placed third the first day with 65% and third again on Sunday with 64%.

I rode Sea Lord in the same classes, only his second time at fourth level. He still gets surprised at all that's coming up during the test! On Friday he scored 64% and placed fourth, and on Sunday he was a litt more confident and placed second with 65%. It was a big class and he did really well.

Tiger Lily was really good on both days and placed second in both of her classes at first level.

Caitlin was supposed to ride Waimea but the mare had a little cut so Sarah Sanz offered Caitlin the ride on Ballatale, who just got to Florida. They had a great weekend and placed second in both of their classes at third level.

I've really been enjoying showing in my L'Apogee saddle; it's very comfortable and the leather that they use makes you kind of stick to the saddle. Denise Rocco sat in mine and went straight away and bought one!

This weekend will be quiet, but the following weekend I'll take the young horses to White Fences, and the weekend after that the older horses will go to the Palm Beach Dressage Derby.