A New Horse for Caitlin 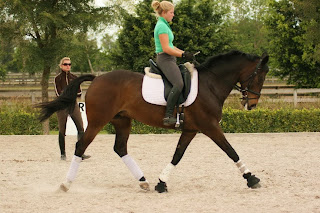 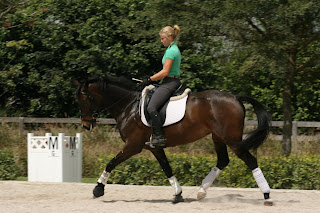 A Dutch Warmblood by Gambol out of a Dutch mare, Gabriella Rossellini is seven years old and was purchased from Alex Robertson in Ocala, FL. She is schooling fourth level dressage and does her flying changes, and has competed in one novice horse trials, which she won.

Silva says, "I'm obviously very excited about her because she's such a good mover. Simone Kann was also impressed with her jumping - they let Caitlin take her on trial for two weeks, which is almost unheard of these days. We also took her to Marcia Kulak's, who liked her too, so we're hoping Boyd approves, since he hasn't seen her yet! We also took her to the show and rode her around. If she does not work out as an event horse she's good enough that Caitlin can sell her as a dressage horse or a jumper, but it looks like she loves eventing."

Caitlin, who is 18, still has three years to compete as a Young Rider, but she knows she has her work cut out for her before she considers trying to compete at the NAJYRC again. "When we tried her she was wild!" Caitlin says. "She nearly bucked Silva off, but we knew she could move and she jumped really well."

"I'm excited to have a young horse," continues Caitlin. "She knows a lot of dressage already. In addition to lessons with Silva, I'm working with Marcia Kulak while I'm down here and I'm excited to work with Boyd at home, too. We'll probably do novice at Plantation Field as our first event."
Posted by Amber Heintzberger at 11:36 AM