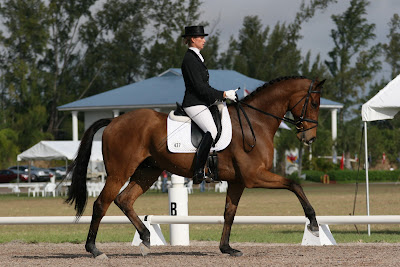 The Palm Beach Derby went really well for all the horses. On Thursday Jeff placed third (64.4) in the Developing Horses class. First place scored 64.8 and second scored 64.6 so it was very close, and a little frustrating because I made two mistakes in the canter and probably would have won otherwise, but Jeff was very good.

On Friday Prosecco was awesome in our first Prix St. Georges together. His trot work was beautiful and his canter was good. I was still worried about his changes, and the four-time changes were so good that I got excited and made a mistake in the three-time changes. He placed second on 69%, just behind Betsy Steiner with 70%. I am going to keep showing him in the open classes for now and probably enter the CDI at Raleigh, NC in June.

Jeff did a different PSG on Friday and was good in the trot but got tired in the canter, so he got just a bit flat. He scored 62%.

Ballatale went in Fourth level test 1 which was a warmup for Fourth level 2 and got 61.3, then scored 63.8 on Saturday in 4th-2, which is a qualifying score for Devon. It's exciting that he's qualified. He's really easy to ride, not an Olympic horse but very obedient - he's a really good guy who tries hard and rarely makes a mistake.

Sea Lord (pictured above and right, Amber Heintzberger photos), scored 65.5 in the same test and placed 5th; he was a little tense, and got strong in the canter. Today in 4th-3 he was so much better! He placed second out of 13 horses. He's already qualified for Devon and I am going to compete him at Fourth level again next weekend. For him it was a big step up from Third to Fourth level - for some horses it's not a big step, but for him it was - so I am going to keep him there a while and then do the Developing Horse classes. I'm not in a hurry with him and he needs to get physically stronger.

My student Lillian Heard did 2nd level and did really well. Last weekend she scored 68% and this weekend 61%. None of the judges know her since she's an eventer and her scores don't really matter because she's getting ready to go intermediate in eventing and her horse has improved so much. She's also working on her jumping with Katie Monahan-Prudent and plans to enter the Plantation Field horse trials when w

e get home, which will be her first event of the year.

Caitlin (pictured left, hard at work; Amber Heintzberger photo), had to sit this show out because Waimea has an ulcer in her eye and we don't want to take any chances with it until it's healed. Caitlin is looking forward to possibly having a new horse soon though!

I am catching a flight to Pennsylvania today to teach a two-day clinic so hopefully I will not be stuck up there in the snow!