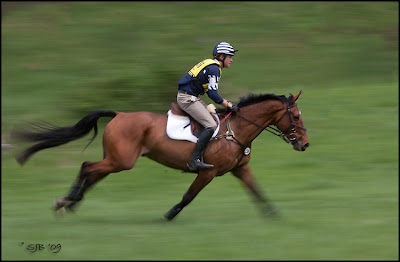 I had a pretty hectic weekend at the Fair Hill International Horse trials with a total of 9 rides over the three days of competition. I rode four horses in the advanced: Remington XXV, Belmont, Rock on Rose and In The Beat; one in the CIC**: Schatzi W; two in the preliminary: Minotaure du Passoir and Aberjoy, (pictured below left, Kellie Wright photo); and two in the training: Vidalia and This is Houston.
All of the horses jumped well in show jumping and cross country. The highlight of the weekend

was a second place finish in the top class with Belmont (pictured above, Steve Berk photo). His show jumping is getting better and better, with only the one rail. Remington was close to his best as well, finishing sixth. This was the final run for these horses until their big outing at the Jersey Fresh CCI***.

It was my first outing with Bruce Davidson's two advanced mares, In The Beat and Rock on Rose. Both horses are fantastic jumpers but a little green on the flat. In the Beat gave me some trouble at the corner half way around the course, so I decided to retire her. Rose was great, finishing in the top ten.
Schatzi W (pictured right, Steve Berk photo), stepped up to her first FEI event in this c 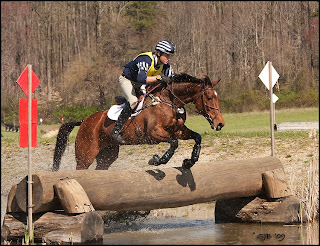 ountry and showed her class. It was my first time pushing her along for speed in the cross country, which was a bit of an eye opener for her. She finished a creditable sixth overall and will do the CCI** three-day at Jersey Fresh next month.
It was a bit sad watching everyone pack up to travel down to Kentucky today. Phillip has his two hot shots, Connaught and Woodburn, primed up. It looks like a red hot field and I wish everyone well.
- Boyd
Hopefully results will be posted on the official website.
Posted by Amber Heintzberger at 9:04 AM