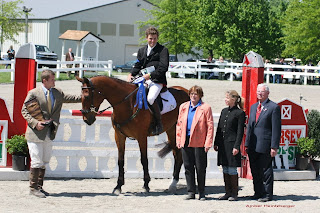 Jersey Fresh was a complete success - I was very happy today because I rode four horses, a few that I don’t know well and they all jumped clear today. Belmont won the CIC***, Rock on Rose came fourth in the same division, Shatzi W was third in the CCI** and Remington XXV was sixth in the CCI***.

All of the horses seemed to jump quite well; I thought it was quite a big course but also a flowing course. Usually you have a few horses that have a train wreck - especially with cross country the day before, it can rattle the green horses especially and it shows up in the show jumping, but we saw good horses and good riders today.

Belmont is half Dutch Warmblood, half Thoroughbred and he’s a fantastic jumping horse. The main goal bringing him here was to get a good result for his sale. I’d love to work out a way of keeping the ride on him because I think he’s got a genuine chance of making the WEG team next year. I’m trying to do the best by his owner, Kate Dichey, and trying to sell him while at the same time trying to find someone to help me keep the ride on him.

Rock on Rose ran fourth in the CIC*** - that's a very new ride for me and I felt the pressure with big Brucey walking the course with me today but she jumped really well.

Remington put in one of his best-ever show jumping rounds. The show jumpingin the past has been his weaker link out of the three phases, but I was very satisfied with how hard he tried. The big thing with Remi is that he’s now qualified for a four-star. My guess is we’ll do a three-star somewhere in the fall and then bat him up for Rolex next year and hopefully have him in contention for the WEG.

I was also third in the two-star on my homebred mare Shatzi W. Shatzi put in a phenomenal effort this weekend. She’s really proved that she’s a high level horse. She’s always show jumped clear and gone clear cross-country and it was good to see her dressage score getting lower with every outing. My plan is to give her a little holiday, then bring her out and start doing some advanced horse trials and maybe look at doing the three-star at Fair Hill with her this fall.

She's one of three that I own here in the US - I also own Neville Bardos and just flew over Fair Fiona who arrived just a couple days ago and I’m excited about her. I think you need a few good horses, it’s a tough sport and there are so many things that can go wrong.

Fair Fiona just set foot in Pennsylvania after a very long trek – we flew her to Los Angeles, then I was lucky to get her on a shipping van for $1600 bucks with a truckload going to Jersey. The trip started with 14 hours Sydney to Melbourne by truck, then a 14-hour flight Melbourne to LA, 3 days quarantine and then a 3-day truck trip across the land, so she was happy to see a paddock again! I gave her a week off to recover. Nobody’s sat on her since Sydney in 2006 – she’s had a couple babies. I’m going to throw the tack on her tomorrow and just walk her to start out. Competition-wise I will just do some preliminary horse trials thorugh the rest of this year because it’ll take a bit of time to adjust to this atmosphere.

In other news Maddie Blackman is going to come work for Silva and I and we’re excited about having her there.