Boyd took three horses to the Richland Park CIC and Horse Trials in Michigan this past weekend. For complete results click here. 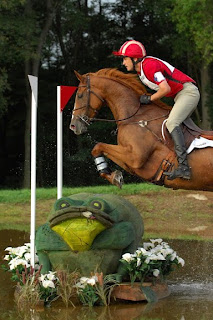 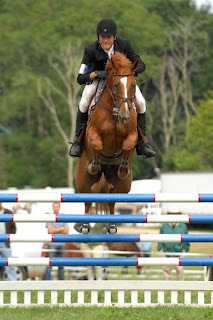 Above photos courtesy of Andrew Bailini
Rock on Rose had a phenomenal weekend in all three phases - it was the first time I got the best out of her in every phase in one weekend so I was thrilled with her. She was first to go in dressage and there was not much of a crowd yet, which suited her because she can get stirred up. She was first out again on cross-country and took all the direct routes, with the second-fastest time of the day, just one second over the optimum time. She jumped clear around the show jumping which was a remarkable effort for such a green horse. This was only her second CIC, after Bromont, but Bruce wanted her to have another run to get her more confirmed at the level. I think she's looking good for the Fair Hill CCI*** in October.

Slide show photos courtesy of Josh Walker for the USEA

It's working out really well with her - Bruce is just around the corner so it's convenient to stop by and ride her, and I'm really enjoying riding with him. It's great fun jumping big fences alongside Bruce, he's such a legendary rider. I'd love to aim for Kentucky in the spring but the horse is for sale, so I'm just enjoying it day by day.

Richland was Shatzi's first three-star and she was going well around the first two thirds of the cross-country course. The water had caused a lot of trouble, eliminating a few four-star horses. Shatzi jumped in well and took the short five strides to the bounce out, over a suspended rail. She bumped her leg over the first part of the bounce and I fell off, so that was that. I think I'll put her down for an intermediate to make sure that I didn't shake her up before I take her back to advanced, probably at Morven.

Remi was disappointing in the show jumping at the past couple of events. I've been working hard on galloping fast around cross-country to make him more competitive, and I think he's a little confused. We've got to try and regroup and teach him that he needs to jump two different ways for cross-country and show jumping. It's a bit of a catch-22, and definitely a learning process. It's frustrating because he'll jump one fence perfectly and then knock the next one down.

I plan to change his gear a bit, maybe put him in a hackamore, and I hope at Plantation it will get better because it was quite disappointing this weekend - he was tied for third after dressage and ended up eighth with five rails down. He would have placed second if he'd jumped clear. Eighth isn't bad out of 21 horses, but it's not second.

The great thing with Remington's owners, Ron and Densey Juvonen, (pictured below at right, Amber Heintzberger photo) is that they are

both horse people; Ron is an avid polo player and Densey is a die hard foxhunter, and they are very understanding that horses are like us and have good days and bad days. I feel bad for them going all the way to Bromont and Michigan and Remi not being more competitive, but as they say - if it was easy everyone would be doing it!


Posted by Amber Heintzberger at 1:22 PM