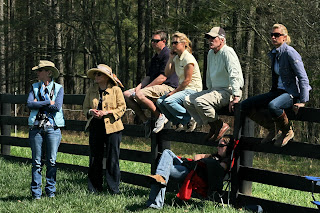 It was a glorious day for champagne show jumping at The Fork in beautiful North Carolina. Minotaure du Passoir held on to his lead in preliminary with a clear round. There were a lot of rails down in the class and it was a big, technical course. I switched to a hackamore for today and it kept him nicely balanced and better to the fences. After this big win it puts him into the lead on the Nutrena/USEA preliminary leaderboard for 2009. I’d like to move him up to intermediate eventually but his owner, Amy Lindgren, has her sights set on the CCI* at
Bromont in Quebec this summer, so that is our goal for now.

Shatzi (pictured right) had a fantastic show jumping round in the intermediate, clear and in the time. Mark Donovan built a really testing course, but she handled it well and moved up a couple of places to finish second. I’m planning to take her to the two-star at the next event at Fair Hill, in a couple of weeks, and then on to the CCI** at Jersey Fresh in May. She’s feeling better and better on cross-country; I didn’t push her flat-out yesterday, I just kept a nice rhythm; I’m saving that for the two-star.

In the three-star Benwald, (left), owned by Anne Hennessey, had a rough round in cross-country, losing both of his front shoes. He got pretty wound up and ran out at a corner, and with his missing shoes he was jumping quite poorly, but he had a respectable round in the show jumping today. He’s getting better in that phase. It was a bit of a disappointment overall this weekend, so I think we’re going to have to rethink his spring three-day plans and try to get him more established, then aim for the two-star at Bromont in June instead of Jersey Fresh in May.

Ron and Densey Juvonen’s Remington XXV (pictured left) was very impressive this weekend. He had a reasonable dressage, with a couple of small errors, then on cross-country he went all the direct routes . It was his first three-star so I was cautious about going too fast, I just wanted to ride accurately, and I probably could have gone a little faster.

He jumped really well today. Since he jumped poorly at Southern Pines a couple of weeks ago I have been working quite hard over the past two weeks on his show jumping, and Phillip changed the way I ride him a bit, getting him more uphill, and he came up with a clear round today.

I was also proud of my student, Molly Rosin, who moved out from California and has been training with me for the past year. She and her horse Charly had a brilliant round in the advanced – he’s a great little horse and they are aiming for Bromont. She rode very well this weekend.