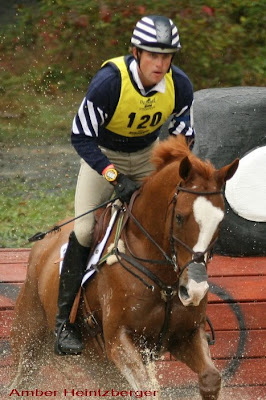 I woke up this morning to a torrential tornado-style storm and probably the worst cross-country conditions I have seen. I got a phone call from Rock On Rose’s owner Bruce Davidson that he didn’t want his mare to run because he was afraid of injuring her in the tough conditions.

In hindsight it was a heartbreaking moment for me because I knew this mare was fit as a fiddle and a fantastic cross-country machine that I truly believe would have gone under the time, but I was quite respectful of Bruce’s decision because he’s a true horseman who had a real concern for his mare. In the end we both agreed that she’d be better off saved for Kentucky next year.

Neville (pictured above) is in the lead in the three-star division after the only double clear round of the day. He’s only nine years old, still pretty young. He’s a real thoroughbred so he was really suited to these kinds of conditions; he galloped right over the mud, I didn’t feel like I was pushing him. Phillip told me to not over rider the horse in the first three minutes and try to find good footing, which meant galloping close to the ropes and if he had energy then to go on with it. The horses that tried to stay close to the first four minute markers ran out of petrol at the end.

Remington (pictured below) put in a great performance today. He was one of the last to go in the three-star and the track was truly trashed, it was knee-deep in mud. He jumped the course very well but really struggled with the muddy going and I decided just to stay off his back and not push him too hard because I felt he was laboring a bit. He finished well and pulled up very well. 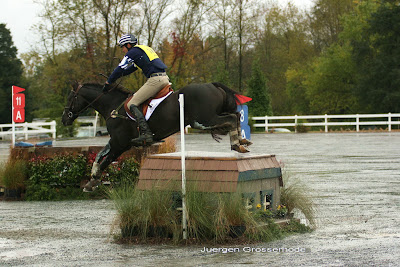 I think that tomorrow it’ll be good to show jump Remi before Neville and get a feel for the course, though they’re quite different to jump. Neville’s pretty good – both of them run at the fences a bit so the key is to make sure they’re not in cross-country mode tomorrow. I hope today knocked the edge off, it might make it a bit easier if Neville’s a bit tired tomorrow! The footing’s really good in there so I don’t think that’ll play a factor at all.

I had two students in the two-star today: my working pupil Lillian Heard had a great round and is fourth in the two-star and Erin Sylvester is one place behind her in fifth. I was proud of both the girls today, they showed some heart getting out there and riding in the rain and showing their horses to their potential.