Update From Silva, With Pictures from Steffen Peters Clinic 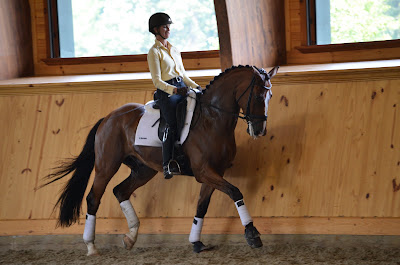 I recently rode Faye Woolf's Aesthete, ("Stately") in a clinic with Steffen Peters, held at Hassler Dressage in Maryland. Suzanne and Scott always do a beautiful job setting up these clinics for everybody; there were 7 riders and about 200 auditors. I was really impressed with Steffen too, everything he said was spot-on. 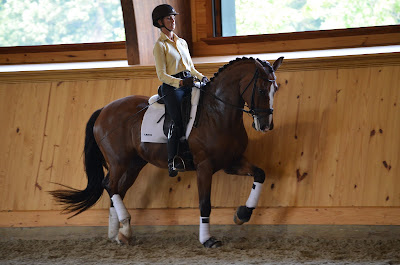 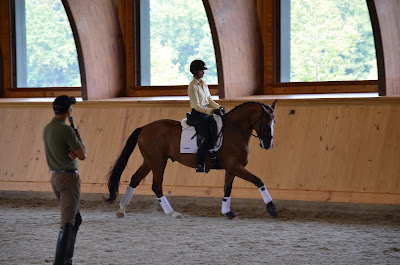 Stately just loves to show off, so with all those spectators he had a good time. He did everything very well; the lesson on Saturday was about 45 minutes and on Sunday it was only 20 minutes because he felt that a for a 6-year-old he’s doing really well, so I was happy with that. We started with the basics and then moved on to harder things like canter pirouettes and half-pass, asking him a few harder questions; his answer was always ‘yes’ so then we quit. 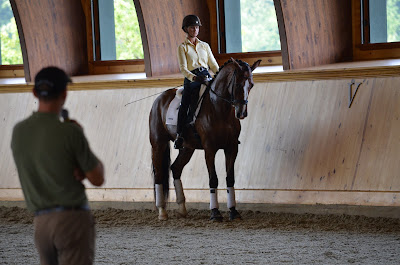 We’re leaving Tuesday to go to the National Young Horse Championships at Lamplight in Chicago. Michael Barisone has been helping us a lot with Stately, too and I feel really good about going to the championships. I hope we do well considering we have to drive so far! I’m also taking Duvent to do the PSG and Faye’s other horse Carrera, who’s doing 2nd level, to Chicago. After that is Devon at the end of September, where Stately will do the Young Horse Finals and is also qualified for Fourth level.

A lot of people at the clinic came up to me and were very excited and mentioned that they are so impressed with how Faye is helping the sport and what a special horse Stately is. I’m excited that we have this special horse we can share together. She’s changed sides – she’s into the dressage now! Eventing is still her passion but she loves a good horse, I think if she had a special reining horse she’d probably love that too. We as professionals could not do this without people like Faye who put their heart and soul into a horse – Stately is being so well cared for by the vets and farriers, and so on. Faye doesn’t save one dollar, the way she takes care of him. I could never afford to treat him so well and I really appreciate it.

We’re on our way to Saugerties right now where Ashleigh is doing her second CDI, trying to qualify for the Younf Riders World Cup in Dec. and Kymmie is doing 4th level on Friday and Sat. I’m doing the Grand Prix with Sea Lord, the PSG with Duvent and the East Coast Rider’s Cup in 2nd level with Carrera.

Posted by Amber Heintzberger at 1:22 PM