I rode five horses today at the Virginia Horse Trials in Lexington. Minotaure du Passoir, owned by Amy Lindgren, finished his season in glorious form over the tough cross-country course in in the preliminary division here at the Virginia Horse Center. He hardly raised a bead of sweat as he galloped over the undulating terrain and tackled the numerous accuracy questions presented. This outstanding horse is leading the class on a score of 24.1.

Also in prelim, Nina Gardner's Thoroughbred/Warmblood cross Pepper had a fantastic round - he was also under the time and rocketed up the standings to eighth place.

In the intermediate, Benwald had a clear round and was one of the only horses to go under the time, so he moved up from fourth to third place. I also rode Beth Murphy's Dutch warmblood gelding Tantibes in the intermediate. He came to me for training because his rider's been having some control issues with him; he grabbed hold of the bit and took off with me on cross-country and after talking to Beth we decided he should change careers and be a show jumper.

I also rode Vidalia, another one of Nina Gardner's. He's a Dutch warmblood gelding by Contango, and he had a faultless, bold show jumping round to stand third; he'll do cross-country tomorrow, and the others will finish the event with show jumping.

-Boyd
Posted by Amber Heintzberger at 7:27 PM No comments: 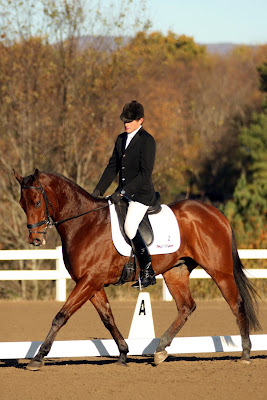 Results should eventually be posted here
Posted by Amber Heintzberger at 8:26 PM No comments:

Be sure to check back for updates!
Posted by Amber Heintzberger at 10:16 PM No comments: 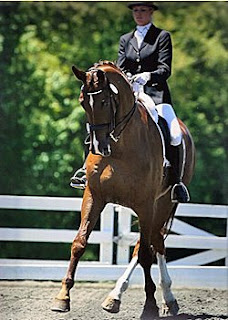 Yesterday Jeff the Chef (pictured above, Sue Stickle photo), won the Fourth Level warm-up class with 69% and today he came back to win the Championship with 70%. It was my first time competing him without a whip but he actually was not bad at all. It had rained a lot and the arena was really sloppy, but he was good. I am really happy that he doesn't spook any more; he's so much easier to ride than last year, he has finally grown up a bit. For more photos, from the official show photographer, click here.

Yesterday was the Third Level championships and all three horses did well. Ballatale did a perfect test: nothing fancy but nothing wrong. He was the first in the ring, which is always tough, and he scored 64.5% to placed sixth.

Sea Lord was the Reserve Champion and he was great. I think the judges don't know what to do with him because he's so powerful; it's like he never touches the ground! It was very muddy and he got a little stuck in one of the flying changes but that was the only problem - unfortunately it probably cost us the championship because the winner scored something like 70.2. There were two judges and one had Sea Lord in the lead but the other didn't and it went to the other horse.

Waimea was very good and scored 67% to finish fourth. I warmed her up a little longer today and I think she was a little more settled so she felt better than on Friday. There were about 35 really good horses in the class so I was happy with all three of the ones I rode.

This morning I rode DP Lidcombe in the First Level Championship in the indoor. The ring was small for him because he is a big horse and still a bit green, and seems to be at the age where he's struggling with the size of the arena. He spooked once and had a couple of little mistakes but I was happy with him because he really tried. He placed somewhere in the middle of the pack.

It was a great weekend and none of the horses could have gone better. I couldn't have done all this with without Caitlin and Lizzie, they were a huge help. All the horses will get a little rest now but I will ride Jeff in the USDF Trainer's Symposium with Scott Hassler the weekend of November seventh.