Saturday at the Global Dressage Festival


We had a great day and a great finish to our Florida season! Rosa was amazing again today. I cannot put into words how proud I am of my little mare! She is was the youngest horse in a very competitive field of 19 horses in the International CDI Intermediare 1. 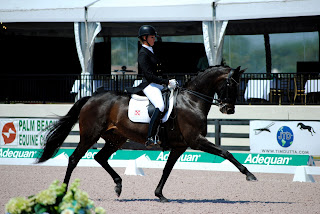 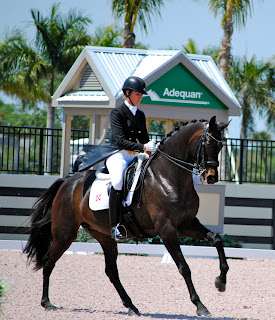 Rosa tried her heard out for me once again! We had a little mistake in our first canter pirouette , which is fine because it is only a question of strength. We finished fourth again today and I could not be happier! 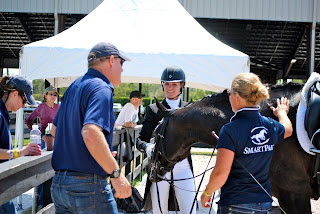 It was so nice to have some of Rosa's and my fan club here cheering us on. I am so lucky to have such amazing people around me who believe in me and give me so much confidence! I could not do anything I do without my amazing supporters and friends! I also have to thank Kymmy and Gracia for being so unbelievably helpful and supportive! Those two girls have been working unbelievably hard the last few months and I am very lucky to have both of them, they always have my back!

Kymmy also rode a very nice PSG today and scored 63.4%!! She and Markie are improving with every test. 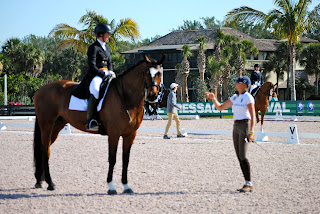 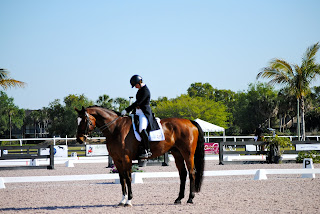 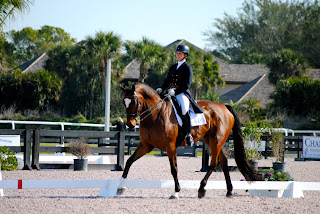 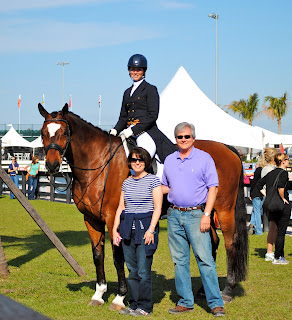 Our fun time in Florida is now over and we are starting our journey home to Pennsylvania in the morning.

Silva
Posted by Amber Heintzberger at 8:30 PM No comments:


I could not be happier with how Rosa performed today at the Global Dressage Festival! We were first on in the International Prix St George. It was the most competitive class Rosa and I have competed in so far. Rosa was the youngest horse in the class. I could not have asked more of her; now we just have to work on developing her strength, and that will come with time.

Kymmy and Markie were in the the National Prix St George today and they had a very nice test. 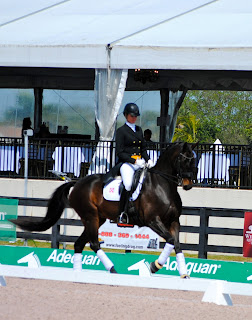 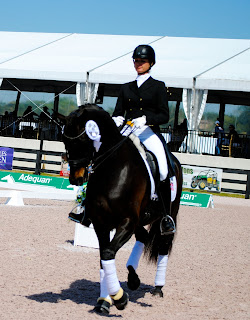 I also rode Camilla VanLiew's Fortissimo B (pictured below) in First Level and he was super. We won the class with 78% and scored 10 for the walk. This is an amazing young horse!


-Silva
Posted by Amber Heintzberger at 8:56 PM No comments:

I was lucky enough to get to Aiken a few weeks ago to see all of Boyd’s horses in training (and to do a little horse shopping). Both Neville and Oscar are looking good and training up well. Although both were scheduled to train with David O’Connor in Aiken (February 12-14) as part of the High Performance program, Neville came up a little stiff after running an Intermediate course at Pine Top the prior Friday. So Boyd thought it best to rest him for a couple of days after the event. Many of the syndicate members got to watch Boyd train Oscar over three days with David O’Connor. 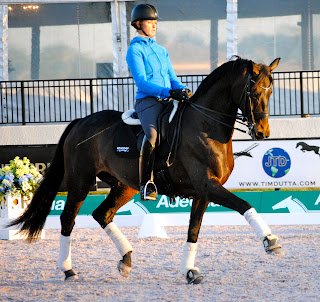 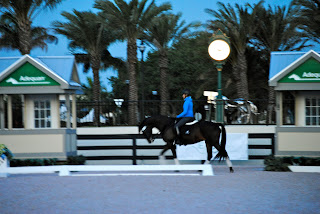 Rosa and I got up early this morning to school in the International ring with Michael this morning before the jog started at 10am. 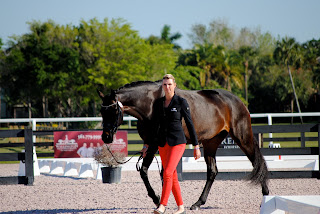 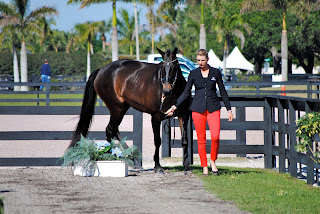 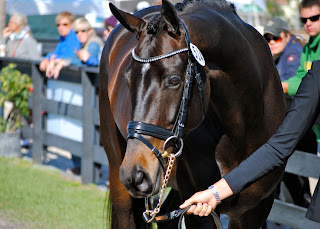 Now for the COMPETITION!!!

Here at Windurra Eventing in Aiken, we are proud to announce the addition of two new outstanding workers/students to our crew: 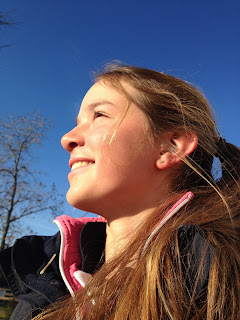 Sawyer is the youngest member of the team. She is a very talented rider with a great work ethic. I'm very excited to have her working with us as she brings an awesome attitude, determination and focus along with 98 pounds of fury. 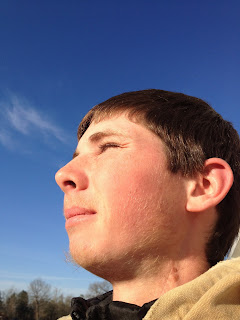 Mike is a wonderful young lad also fueled by a fantastic personality for this job. He is partnered up with an extremely talented mare who could possibly take him to greatness.
Posted by Amber Heintzberger at 8:11 AM No comments:

We went to the Wellington Classic this weekend and I had di Solitaire, owned by Ann and Mike Laver, in first level and the Markel Young Horse Qualifier for 5-year-olds. I was really hoping to better his score from last time because he was a little green and finished 7th or so. On Saturday he won first level with 74% and on Sunday he did the qualifier; the judges loved him and he scored a 83 which is the highest score any 5-year-old has gotten so far this year.

Benefactor is still in the lead, and this puts Sully about 4th when you average their scores with the last show. I’m hoping to get another high score at Virginia in a few weeks so the 77 from White Fences will be a drop score, and we can get his average up.


Benny, owned by Melinda Walton and Larry Smith, won on Saturday with 73% at First Level and won another first level with 76% on Sunday. Since he’s in the lead in the Young Horses I didn’t show him in that class; we will do the selection trial in June, for the World Breeders Young Horse Championships in Verden, Germany.

I also had Likely Story, owned by Laurie Cameron, in Second level; she was a little nervous and green, but she’s a good little mare and I’m happy with her progress.

I also rode Monte Carlo, a ten-year-old sale horse owned by Ellie Ball, in 3rd level test Three. It’s kind of a hard test with the flying changes and he’s great. He’s such a great amateur horse; you could ride him in the circus and he’d be fine! He was 2nd at Third level on Saturday and won on Sunday.

Gracia rode Colin for the first time, owned by Ann Laver; Ann and Mike are so nice to let Gracia, who’s a Young Rider, have the opportunity to ride him. I’m really excited because it’s a good match and I think that can do great things together. She won on Friday and was second on Saturday in her first time at 3rd level. That’s huge because there was a lot of atmosphere and it’s a tough test.


Kymmy rode Hot Date, her young horse, and was second to Sully on Saturday in First Level with 69% and second to Benny on Sunday with a 66%.

This week is my biggest week in Florida because we have the Global Dressage Festival CDI with Rosa; I’m really excited because a few of her owners and fans are going to be there. I’ll also be riding Fortissimo in the first level and Kymmy’s riding Wiedermark in the National PSG.

I’m also looking forward to it because Rosa has been going so well. It’s going to be a huge atmosphere, which I hope will work well for Rosa - hopefully I'm not jinxing myself by saying that! It’s a little like it would be in Europe, with a lot of people and a lot of competition. We’ve improved even more since the last CDI; I work with Michael Barisone every day and she’s getting better and better.

The jog is on Thursday - hopefully this will be a little quieter than our last jog - and she’s doing the PSG on Friday and the I-1 on Saturday. Then we’ll load up and head home on Sunday. I’m also looking forward to getting back home!

Posted by Amber Heintzberger at 2:13 PM No comments:

Associated Press writer, Eddie Pells, recently was awarded two awards for his excellence in journalism.  One of his entries, the story he produced on Boyd and Neville's journey, was internationally recognized by the AP for top story of the year.  Excerpts from the press release are below, and your can read the full article HERE!

"Pells won the Grimsley Award for outstanding body of work and also took best feature honors with a story on equestrian rider Boyd Martin, his horse Neville Bardors and their dreams of the London Olympics."

"His entry on Boyd Martin, a horseman who moved from Australia to the U.S. to further his Olympic dream, should be made into movie; it was that touching."

To revisit his story, you can read it in it's entirety HERE.

Posted by Lisa Thomas at 9:54 AM No comments: