All four of Boyd's entries are off to a solid start at Wit's End Horse Trials in Mansfield, Ontario, Canada after the dressage phase. Tomorrow's cross-country should shake things up a bit and hopefully give him a little boost in the standings going into show jumping on Sunday.
For up-to-date results in the advanced division click here and in the CIC3* click here.
Posted by Amber Heintzberger at 8:13 PM No comments:

On the Way to Wit's End

Boyd is driving to Canada today to compete at the Wit's End Horse Trials and HSBC FEI World Cup Eventing Qualifier in Mansfield, Ontario this weekend. Here is an update from the road:

I have four horses running this weekend at Wit's End. Remington XXV is having his first serious run since he won the two-star at Jersey Fresh (click here for video). He's competing in the CIC***-W and is on track with his preparation for the CCI*** at Fair Hill in October. I'm pretty excited about this weekend because his flat work has been going really well, and there is $40,000 prize money on the line. If he feels good on cross-country I'll let him stretch out and gallop a little.

Another one I'm excited about is Shatzi W, pictured at right, who is running in her first advanced this weekend. This is the first time that I will be riding a horse that I bred at this level. She's

getting to be a downright worldly mare: she has competed in Australia and the U.S., and Canada will be the third country that she's competed in. My goal is to get her qualified for a three-star, which is tough with the new qualifications since you have to run all over the country, so hopefully she'll have a good run this weekend.

I also have two other horses in the advanced division. Rock On Rose, who belongs to Bruce Davidson, is looking pretty good; Bruce has been helping me a lot with her dressage and jumping and I am also aiming her for Fair Hill in the fall. Wit's End will be her first three-day since Bromont, again on Canadian soil.

Benwald had a quiet past few months, most recently running intermediate at Maryland. This is his first big event since The Fork; he was pretty footsore after pulling both front shoes on cross-country there and glue-0n shoes seem to have helped him a lot.

We're crossing the border now...be sure to check back for updates!

-Boyd
Posted by Amber Heintzberger at 11:31 AM No comments: 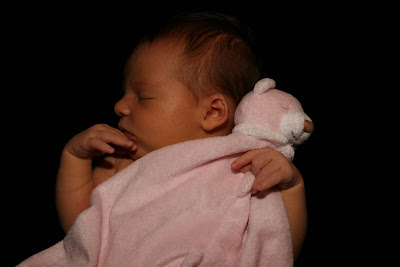 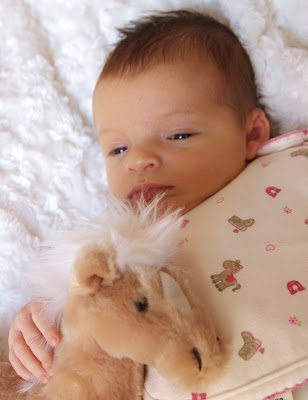 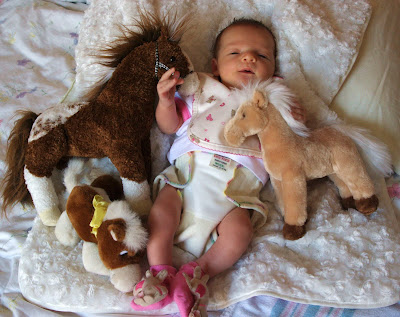 I am usually behind the scenes here on Boyd and Silva's blog, but this week my husband Juergen and I have some news of my our own to share: the arrival of our baby girl, Emily Katharina Grosserhode. She was born July 24 at St. Vincent's Hospital in Greenwich Village, New York City, weighing in at 8lbs., 11oz. and measuring 22 inches tall. While riding lessons are still a ways down the trail, she is obviously off to a good start with a herd of ponies to look after!

July 31, Mansfield, Ontario -- Wits End Farm in Mansfield Ontario will host the only Canadian stop of the HSBC FEI World Cup™ Eventing Qualifiers from August 6-9. Top ranked riders from around the world will compete in dressage, jumping and cross-country. The event will also feature a CCI* competition for up and coming riders and horses.

Located near Alliston, Ontario, Wits End Farm is hosting this prestigious equestrian event, the last stop in the 2009 HSBC FEI World Cup™ Eventing series. Over 2,000 people are expected to attend the four-day competition, which is the last chance for riders to earn points towards qualifying for the HSBC FEI World Cup™ Eventing Final held August 21-23 in Strzegom, Poland.

“From the beginning Bill McKeen and I had the goal of creating an internationally recognized eventing facility,” said Jo Young, co-owner of Wits End Farm. “The dream is now a reality and we’re absolutely thrilled that the FEI has included us on the international circuit.”

More entries than ever before have been received for this year’s event, including top ranked riders such as Olympic and World Champion Philip Dutton (ranked 11th in the world), Bruce Davidson Jr., from the United States (18th), Boyd Martin from Australia (66th), and Canadian stars Kyle Carter, Carl Slezak (206th) and 2008 Wits End winner Corinne Ashton.

The competition gets underway on Wednesday August 5 with the Canadian Young Event Horse competition. Thursday sees the start of Dressage, which will run through to Friday evening. Saturday is the exciting cross-country day where spectators will see the riders tackle the 4-kilometre course featuring banks, ditches, water and extremely challenging fences! Sunday -- the culmination of the competition -- features show jumping, where riders compete in reverse order of standing. The prize ceremony will take place at approximately 3:30pm. Over $40,000 in prize money will be up for grabs, as well as a host of prizes in-kind.

"The HSBC FEI World Cup™ is an integral part of our sponsorship," said Giles Morgan, Group Head of Sponsorship, HSBC Holdings, plc. "It offers a truly global circuit with the nine qualifying events being held in many of our key markets. Through this partnership we have been able to engage with our customers at a regional and local level. Throughout the qualifying events we have seen some fantastic competition."

Wits End is the first ever Eventing competition to receive support from Sport Canada’s International Hosting Program. Generous support has also been received from dozens of local sponsors.

In addition to the marquis events of dressage, jumping and cross-country, visitors to Wits End will also host a number of other shows and demonstrations, including:
• A Birds of Prey demonstration by Master Falconer Matt Lieberknecht from Wye Marsh (Saturday, August 8th)
• The Hoof Beat Outriders Drill Team, a western precision drill team from Orillia (Sunday, August 9th)
Throughout the competition, visitors to Wits End will also be able to browse through an extensive Trade Fair featuring booths from a wide range of equestrian vendors as well as artists and designers.

Hosted by farm owners Jo Young and Bill McKeen, Wits End is the culmination of countless hours of volunteer effort.

“We’re thrilled to help out with such an important event,” said Tammy Trace, who works on the Site Preparation Committee. “It’s a lot of fun and, at the end of the day, it helps grow the sport here in Canada.”

Admission for the three days is free with a $12.00 charge (cash only) for parking including shuttle to the eventing grounds. Note: There is no ATM on site. Cash is also required for on-site food and beverages, except for VIP pass holders.

Parking for Wits End is located off the 7th Concession of Mulmur North of Highway 89. Please note the road will be closed for all but local and Wits End traffic.

ABOUT WITS END: Jo Young and Bill McKeen are both International Officials in the sport of Eventing. They began Wits End Farm in 2002 with the goal of becoming an internationally recognized facility for eventing. In 2004 they held the inaugural Wits End Horse Trials, which featured 16 entrants. In 2009, Wits End is now the only Canadian stop on the HSBC FEI World CupTM Qualifiers. For more information, see www.witsendhorsetrials.ca.

Posted by Amber Heintzberger at 10:08 AM No comments: