After spending her summer as a working student for Boyd at True Prospect Farm, Sarah Grice wrote a fantastic blog on Eventing Nation. Follow this link to read all about it!
Posted by Amber Heintzberger at 1:30 PM No comments:

A Word with Melinda Walton

Melinda Walton and her husband of 39 years, T. Larry Smith, recently moved their small breeding operation of twenty horses from Texas to Virginia. Their horses Duvent and CeCe are in training with Silva at True Prospect Farm.

Melinda says, "We moved to Virginia for a couple of reasons. Namely, to get out of the extreme Texas summer heat and secondly, to have access to excellent trainers, handlers, riders and breed shows. After our first summer in Virginia, we know that we've made the right decision.

"We found out about Boyd and Silva through Jan Byyny of Surefire Farm. She is a neighbor of ours and is training a four-year-old filly, Bebe LaRue RRS, to be an eventer. Bebe is by Bonheur (Brentano II) out of Portiana by Prince Thatch.

"Larry and I invested in the best broodmares that we could find and have been very happy with the results from our eight years of breeding Hanoverians. All of our horses, whether they are Wesphalian, Dutch, or Oldenburg, have gone through the testing and approval process with the American Hanoverian Society and have been entered into their Main Stud Book. We are looking forward to producing three to four quality foals per year."

Welcome Melinda and Larry and best of luck!
Posted by Amber Heintzberger at 11:38 PM No comments: 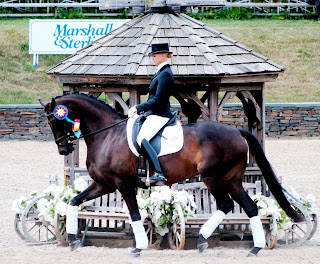 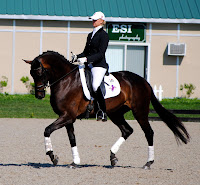 Rosa Cha (photos at left and above) won the East Coast Riders Cup at Saugerties this weekend! That was the highlight of the show for me. I didn’t have a good start; we were planning on leaving Wednesday but I hurt my back so the show started with a little drama! On Thursday it was still painful but I started feeling a little better.

I had the PSG with Sea Lord and he was feeling good...I was disappointed that I messed up both pirouettes, which are double marks so an expensive mistake, but the trot work was good and he knows his job so I was happy in general. We only scored 61% and I thought it was better than that, but then I got my test back and saw that the judges commented that he was tight and tense in the canter, which is true, so now we have something to work on. He didn’t make any mistakes in the changes so I was happy with that. He finished 8th or 9th in the PSG.

Then Rosa won her first part of the East Coast Riders Cup, Training test 3, with 77% - she was awesome, she was really good! Everyone talks about her when she comes to the warm up and she’s so fun to ride. She won by miles. These were big classes with about 30 horses, so she was especially good for being so young at a big show ground with lots of atmosphere. There was wind blowing the flags, and she just put her head down and did her job.

Then I rode Comet V in 3rd level test 2 in the same ring that Rosa went in. There were things to see on all four corners: shops, people, golf carts and the American flag flapping in the wind. It was a very electric atmosphere. Since he’s not a spooky horse we didn’t even think about taking him around there beforehand, and that was a mistake on our part. On the plus side he was a little more up in the trot work but in the canter he got away from me a little bit. It wasn’t our best performance which was disappointing but he improved during the weekend so that’s okay.

Duvent (photo at right) is a 7-year-old Deniro gelding owned by Melinda and Larry Walton. I think he only did 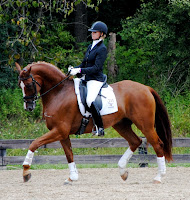 one show when he was a four-year-old, and that was it until now. I worked him on Friday but I was still in pain with my back and he was excited, so I was a little worried about keeping him calm for the test on Saturday. I walked around and took my time and on Saturday he was first to go at 8am. He was actually really good. He did 2nd level 1 and 1st level 3 and did two good tests. He was a little bit excited and tense in the canter but he’s such a beautiful mover, he scored about 68 or 69%.

Unfortunately we had a little bit of a problem because I had been meant to ride London Venture but I took Duvent in his spot. The organizers gave us numbers for both horses and there was some drama over which number to use, and they disqualified him which was disappointing because he would have won both his classes! I wanted to do a good job for Melinda and Larry and it was a stupid mistake, but I was really happy that Melinda said to just take it as a schooling day and that we just have to get him out and going. That shows me that she’s in it for the long run and I hope we’re going to have a great future. He came back on Sunday and won 2nd level test 4 which was a harder test, so I was really, really happy with him. 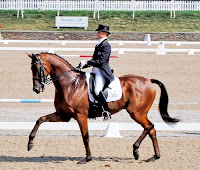 On Saturday Sea Lord (photo at left) did the I-1 in the CDI, and I tried to get him relaxed and loose in the canter. Obviously you can’t improve that much in one day but he was better and did both pirouettes nicely. We scored 62.8 and we were around 8th place, which is okay – I can see what the judges don’t like and we have something to work on. I was hoping to do better but it was his first CDI and we have time. I’m not giving up on him!

Rosa Cha (right) won the second part of the East Coast Riders Cup with 78% and had the big prize giving, her first time in the big ring with

the other horses and the ribbons, and she loved it!

Then I had Comet in 3rd level test three, and he was much better. Sarah took him in the ring and walked him around the night before and he was much more relaxed. We had one early change which cost a few marks but we finished fifth in that one.

On Sunday morning I took Rosa in one more Training level 4 because I needed one more score for the regional championships and she won again with 76% – she’s unbeatable! 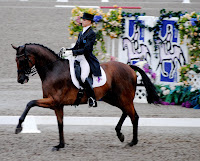 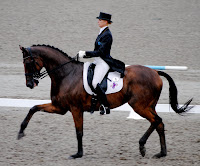 I also had the freestyle with Sea Lord (photos above) and it was pouring rain and disgusting out, but he didn’t care, that’s the Thoroughbred! He did very well and scored 64.8 or so and placed fourth, which was great.

Comet finished 3rd in the 3rd level test 3 Sunday morning, also getting another score for regionals, so he’s qualified now – everyone is qualified.

Overall it was a painful weekend because of my back and I wish I could have ridden better in some parts but I am happy with the horses overall.

Jeff was entered in the Grand Prix but I didn’t ride him because he’s so much horse and I need I need to have my whole body in good condition – I didn’t want to ride in front of the judges and not do a good job. He’s still green and I have to be able to help him a bit still. But he’s going to New Jersey in 2 weeks for the Labor Day weekend show. Then we have the regional/BLM championships in October. 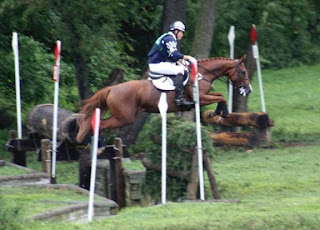 Professionally produced from the first day under saddle,
this bred-to-event mare shares the same thoroughbred dam as recent
Millbrook Advanced winner “Are You Ready”.
In only her second time out at the Preliminary level
she bested a field of 24 finishing on a score of 26.5.
For more information
please contact Boyd Martin (610-806-2381)
or check www.BoydandSilvaMartin.com
Posted by Amber Heintzberger at 9:29 PM No comments:

Here's our newest photo album of Lillian Pink.  Watch her mature from a foal to an eventing talent!

Posted by Lisa Thomas at 5:34 PM No comments: