I am very proud, happy and a little bit sad to say my partnership with Remi has finally come to an end after six years of competition together that has taken us both all around the world.

Today I met with Remi's owners, Ron and Densey Juvonen, and we all agreed that Remi has done more than we had ever dreamed he would, and enough is enough for 'The Hanoverian Hurricane' right at the top level. He has been super sound and tried his heart out doing two three-day events a year since we partnered up in 2007. Ironically our partnership started with Remi as a sales project, but we never managed to sell him due to failed vet checks. Even though it's tempting to get another big performance out of him, it's a nice feeling parting ways while he is still on top.

He finished clear in four CCI four-stars, with 8th, 9th and 12th place finished at Rolex Kentucky, and 7th at Pau (France).  He competed in events in the US, Canada, England, Holland and France and has earned a total of 705 Grade Points with the USEA during his career competing at the preliminary and higher levels of eventing. That score places him in 26th overall.  On top of all of this he was the reserve horse for the US team at the 2010 WEG , and reserve for the 2012 Olympic team.  He also showed his versatility by hunting in the second field with the Cheshire Hunt in Unionville once the eventing competition season was complete every year. 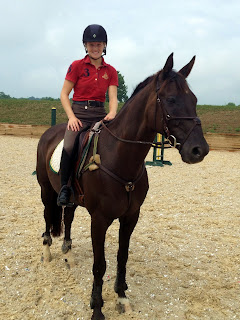 I am also glad to report that Remi will stay in training with us under his new rider, my assistant Caitlin Silliman. Caitlin is fast becoming one of America's next top riders, and the experience of riding Remi will add a valuable education to Caitlin on her path to becoming an awesome trainer.  Hats off to Ron and Densey for allowing their horse to contribute to the training of the next generation of riders here in the States, and to Seema Sonnad for sponsoring this undertaking.  I believe that Remi is still happy and enjoying the sport and that this will be perfect for him.  I also believe that the Juvonens' granddaughter Camilla will be receiving dressage lessons on Remi from Caitlin.

All in all, I am very thankful and appreciative that I met Remington and the Juvonens by chance when I first landed on American soil a few years ago. It is an absolute pleasure riding a horse for great owners like the Juvonens and it has also been an honor riding a horse that never stops trying.

Plantation CIC Gearing Up to be Bigger and Better than Ever

One of the most exciting CIC’s in America is less than five weeks away: the Plantation Field International Horse Trials in Unionville, PA. They are gearing up for this to be their best-ever event! I’ve come on board the Committee this year, joining Phillip, course designer Tremaine Cooper course builder Eric Bull, and event organizer Denis Glaccum on a weekly basis, giving a rider’s point of view of what we feel would make the course a more flowing ride. Phillip and I have both been out there a number of times, putting our two cents’ worth in with some ideas on jump construction and course layout. We want to help develop a course that encourages forward and positive riding. I can guarantee anyone entering any class at Plantation this year that the courses will be better than ever.

The footing will also be top notch: farming guru Jamie Hicks has been relentlessly spreading mushroom compost over the path for the cross-country courses and at the moment the course is very similar to the turf at Royal Ascot!

Organizer Denis Glaccum has taken a leap of faith, making some brilliant changes to the format of this year’s CIC and horse trials classes. All preliminary horse trials classes will have the luxury of doing their dressage in the large 60x20 meter arenas. Notably, he has done away with compulsory stabling for the CIC horses after getting permission from the ground jury, making for a more affordable and convenient event in the international classes for local riders. Plantation also will be sporting the world’s first-ever red rubber brick jog-up strip made of PaveSafe Pavers, thanks to ECORE International.

TO VOLUNTEER - - NO HORSE EXPERIENCE NEEDED for some of the jobs!
CLICK HERE contact Melissa Roddy-Wright mroddy.wright@gmail.com
Posted by Amber Heintzberger at 3:35 PM No comments:

Posted by Amber Heintzberger at 8:41 PM No comments:

Interview with Boyd on EventingNation

Samantha Clark recently spoke with Boyd for EventingNation.com. He reflects on his Olympic experience, the Millbrook horse trials, and talks about his plans for several of his top horses, including an update on Otis' Olympic injury. Click here to read more, or copy and paste: http://eventingnation.com/home/a-brief-conversation-with-boyd-martin.html  This is just a preview; their entire conversation will be live on the Eventing Radio Show next week, Thursday the 16th of August. Thanks Samantha!
Posted by Amber Heintzberger at 9:38 PM 1 comment: