It was a fantastic afternoon for eventing at the Horse Park of New Jersey today for the Jersey Fresh three-day event.  After a rocky beginning to their first season at intermediate, both Crackerjack and Merging have matured into genuine two-star horses.

With double clear rounds on both horses today, Crackerjack maintained the lead in the CCI2* and Merging moved up from 6th to 4th place. Boyd said both horses felt like seasoned campaigners over their toughest test to date.


It was Trading Aces' first advanced with Boyd - he had competed at this level once with another rider - and he said that they are still getting to know each other. "I think that he's a very exciting horse and once we're really on the same page, he will be one of the best in the country," said Boyd.

Caitlin and Hoku breezed around their first CIC three-star course to stand in tenth place. This was a big step for both of them and now they are qualified to run around the CCI*** at Bromont next month. It was a very exciting day for this pair that also has had a dramatic and successful comeback after the fire at True Prospect Farm nearly one year ago.


Because the Olympic selectors felt that Neville didn't have anything to prove by running cross-country today, he will just do the show jumping tomorrow. His next run will also be at Bromont. "We're trying some different things right now in his dressage warm up; obviously yesterday's plan didn't work, but this morning we changed things around and went through the four-star test again and it felt good."

Also be sure to show your support at http://www.facebook.com/BoydMartinEventing

Take a virtual walk around the course thanks to EventingNation.com

Neville Getting Ready for Action at Jersey Fresh 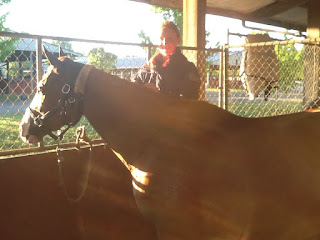 Lindsey is getting Neville beautified for his 10:35 dressage ride. Trading Aces is on at 12:16. We are off to a good start: after yesterday's dressage, Crackerjack leads the CCI** and Merging is tied for 6th place.

Click here for times
Posted by Amber Heintzberger at 7:55 AM No comments:


Here are the web extras that include Capt. Mark Phillips talking about Boyd’s chances of making the Olympic team and Boyd talking about how to train an eventing horse.  Compliments of Jenny Dubin, Producer for NBC.

Missed Nev and Boyd on NBC's Rock Center with Brian Williams? Follow the link to the program here 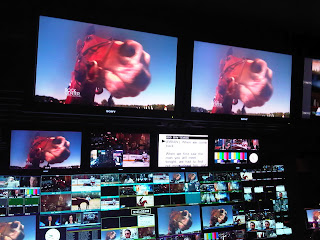 We hope that everyone had the opportunity to watch Harry Smith's feature about Boyd and Neville on NBC's Rock Center with Brian Williams last night. This project has taken several months of organizing, filming and editing, and the folks at NBC did a great job telling this story sensitively and without overdoing the drama. Boyd was a natural in front of the camera and of course Neville enjoyed all the extra attention and carrots, but don't worry folks, Boyd and Neville won't be running off to Hollywood to change careers any time soon, they've still got their work cut out for them in eventing.


Posted by Amber Heintzberger at 8:24 AM 3 comments:

Yesterday we arrived at the Jersey Fresh International Three-Day Event, two hours later than planned after we got lost on our way there. Thursday's dressage rides include Boyd on Crackerjack and Merging in the CCI** and me and my horse Berkley in the CIC**. This is both Crackers and Merging's first CCI**, and both look fit, beautiful, and more than ready for this weekend's event. Berkley and I had some trouble at a corner in the Advanced at Fair Hill a few weeks ago, so we are running the CIC** to have a good go cross-country. 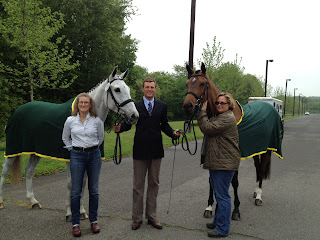 Friday's dressage will bring Boyd on his longtime champion Neville Bardos and his brand new ride Trading Aces in the CIC***, as well as Caitlin and Hoku in their CIC*** debut! We were able to ride in the dressage arena today to get the horses used to the atmosphere in the ring, and Thursday's weather is supposed to be beautiful, so we're excited for the start of a good weekend!

Posted by Amber Heintzberger at 8:07 AM 5 comments:

Posted by Amber Heintzberger at 10:23 PM No comments:


We had a great time at Morven Park this past weekend. It was nice to be showing my horses again since we have not shown since we came back to Pennsylvania.
Showing at Morven Park is always a great weekend because Melinda Walton and Larry Smith have all of us stay with them at their beautiful breeding farm in Purceville . We had so much fun. Sara Reese (part owner in Rosa) and Sara Sanz ( owner of Ballatale) also stayed at Melinda and Larry's. I loved having Sara and Sara with us this weekend. Melinda and Larry cook the best dinners and look after us amazingly I can not thank both of them enough for making all of us feel so welcome!

Elite Pharis is a new horse for me and it was so nice to meet his owner Liz Marenakos this weekend. Liz lives in SC and came to Morven Park to watch Pharis show. I was very impressed with Pharis this weekend: we showed in first level test 2 and 3 and we won both classes with 72,5% and 74,6%. Pharis is with me to be sold and I know that he will be an amazing horse for somebody that is looking for a fancy and honest horse to take up the levels.

Benefactor RRS is owned and bred by Melinda and Larry. Benny really really impressed me this weekend. This was his first show ever and he is four years old but he acted like his has done this for 15 years. Nothing bothered him at all. We showed in the materiale class on Saturday in the outdoor ring and he was amazing. We won the class with 81%. On Sunday we did our first 4 year old test and we won that class with 79%. I am so exited about riding Benny in the Markel 4-year-old qualifiers and at the east coast selection trail in June.

Duvent, who is also owned and bred by Melinda and Larry, cleaned up as well. We won both fourth levels with 72% and 68%. Duvent is really growing up and I believe he is going to be a fantastic horse.
Rosa Cha is still unbeaten in 2012. She has not come second once yet. We showed fourth level test 3 for the first time on Saturday and won with 73% and fourth level test 2 on Sunday and won with 69%. Rosa is a very special horse and she is one of the best competitorsI ever had. She will be a big-time horse!

Kymmy's new 4-year-old Hayden also impressed us a lot. He was amazingly calm and super rideable. They finished second in the materiale class and scored 71% in the four year old test on Sun. Hayden is going to be a very nice horse!!

Scout rode her mare Fancy in first level and finished third and fourth. Scout has an amazing young mare that we will start up again soon. The mare is three  and a half now and we are planning on getting her ready for the materiale class at Dressage at Devon and the four year old classes next year.

Jacky Gilbertson who owns part of Rosa also came on Sunday to watch us go. It was so nice to see Jacky!!

Posted by Amber Heintzberger at 10:06 AM No comments:

Beau Guimond's Weekend Wrap Up from MCTA at Shawan Downs 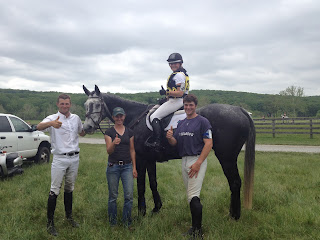 This weekend the team traveled to Shawan Downs for the Maryland Combined Training Association Horse Trials. The weather proved to be great and the cross-country course, held by the Land Preservation Trust, was in fantastic shape. The team took 13 horses and rode over two days from Novice to Intermediate. Being the newest member of the team, it is amazing to watch how efficiently Lindsey Taylor prepares all the horses and makes it seem effortless. Boyd truly is an amazing rider and teacher who gives each horse 100% when preparing and competing. He is tireless in his preparation and commitment. He rode 10 horses and made it look easy.

One of my jobs as a working student is to help with the preparation and conditioning of the horses for the events. Boyd sets the individual schedule for each horse and then our team is involved in making it happen. The team is truly focused on making each horse the best that it can be. During the month that I have been riding under the team’s conditioning and management plan, my riding and my horses have undergone an amazing transformation. All members of the team – Caitlin, Sara and Emily-- are fantastic riders and handlers and go the extra mile to help. The atmosphere at the barn is amazing: Boyd gives new meaning to work hard and play hard!

Here are the results of the weekend: all of the horses went around great in the cross-country phase. Boyd had a great ride on Cold Harbor and placed 2nd in Intermediate. Boyd competed a new horse, Master Frisky, who he had never ridden before and placed an amazing 6th overall. Boyd rode Steady Eddie, New Cadet and PartyBoy in Preliminary and all showed great character by breezing around the cross-country. Steady Eddie and New Cadet went double clear while Partyboy had one rail.

Sara Gumbiner put in a fantastic ride in Open Training and finished 1st for the second event in a row on Polaris, on a 26.8! Boyd rode Bacardi, Ballyneety and Quinn Himself in Training divisions and each went double clear and finished in the ribbons. My horse Otter & I finished 2nd in Training Rider and Boyd thinks we are ready to tackle Preliminary at Fair Hill. My second horse, Astar, placed 4th which was our first double clear training ride. Boyd finished his day riding his younger horses, Warranga & SBF Cortez, in Novice and finished double clear in 7th & 8th place.

All in all it was a great weekend and the horses deserve a well-earned day off! As for Boyd, he never stops and is constantly working each day toward his goals. I don’t see how he does it but the results are in the horses and I, for one, am appreciative to everyone on the team for bringing me along on the ride.