Cincinnati, OH – For the first time ever, the USEF crowned two horses with its highest honor, one from an International Discipline and one from a National Discipline. Neville Bardos and Sjoerd were named 2011 Horses of the Year at tonight’s USEF annual Horse of the Year celebration. Honored for their accomplishments in 2011 their roads through the last 12 months, while both exceptional, have been very different.

Videos of all of the Horses of Honor are available here:http://www.usefnetwork.com/featured/USEFAnnualMeeting2012

Horse of the Year Neville Bardos (Photo Courtesy of USEA)
He shouldn’t have lived. But he did. He shouldn’t have returned to his life as an event horse. But he returned better than ever. Trapped in a burning barn for 45 minutes, Neville Bardos made a miraculous recovery from injuries sustained in a fire that claimed the lives of six other horses at his rider Boyd Martin’s barn in West Grove, PA. The now 13-year-old Australian Thoroughbred gelding won the USEF National CCI3* championship in 2009 and was 10th at the 2010 Alltech FEI World Equestrian Games – leading the U.S. effort. But his life changed dramatically in the early hours of Memorial Day in 2011. Martin pulled him out of the burning barn to safety. Neville Bardos was left with horrific injuries due to massive amounts of smoke inhalation and the subsequent damage to his throat.

Neville, who is owned by 10 members of a syndicate bearing his name, never seemed to feel as badly as he should have and he began making a miraculous recovery. Through the help of his vet (Dr. Kevin Keane), his groom (Lindsey Taylor) and the Fair Hill Equine Therapy Center (where he visited the Hyperbaric Chamber) Neville defied the odds and made a miracle trip to the Land Rover Burghley Horse Trials in England in September. He rocketed around the cross-country course clean and fast and finished seventh at the world’s toughest CCI4*.

Braver than brave, Neville Bardos’ courage saw him through more than just a difficult cross country course it helped see Martin through the rebuilding of his own life. Shortly after the fire, Martin lost his father in a bicycling accident in Australia. Shortly after that Martin’s wife Silva lost her father to cancer. It was a nightmare summer for the Martin’s and Neville’s success helped them find their way through it.

In 2011, he was also second at the Red Hills Horse Trials in the CIC3*(in March), fourth in the Advanced at the Millbrook Horse Trials in August. If Neville Bardos had lived the rest of his life in the field this story would have had a no less incredible and happy ending. But Neville was looking to make a miracle and tonight was the next chapter in that mission.
Posted by Lisa Thomas at 10:49 PM No comments:

Neville Bardos is the 2011 USEF International Horse of the Year!

It was announced at a Gala dinner tonight in Cincinnati, OH that Neville Bardos is the 2011 USEF International Horse of the Year. There were a lot of other great horses nominated, and we are all very happy that so many people agreed that Neville is deserving of the title. Many thanks to all of Neville's adoring fans, and here's to 2012!
Posted by Amber Heintzberger at 10:21 PM 1 comment:

Continued Coverage of Neville on NPR!

We received a call today from the BBC regarding the recent front page article in the New York Times.
NPR has run a subsequent radio piece on Neville on "The World", which is part of BBC radio.

Do not fret if you miss it live on your local NPR station. Here it is online. Take a listen!
Posted by Lisa Thomas at 7:44 PM 1 comment:

Boyd and Neville Featured in The New York Times 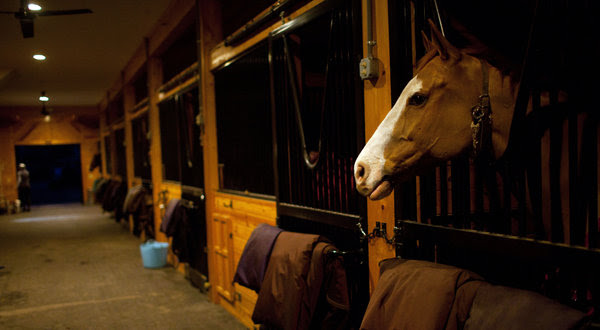 Neville Bardos is a finalist for international Horse of the Year. More Photos »

AIKEN, S.C. — The horses’ straw beds were ablaze, with the rest of the barn, when two men rushed in against the flames and black smoke to try to save the 11 horses inside.

“It was horrific,” said Boyd Martin, the trainer. “Basically, you could see some of my horses burnt to death.”
Six were dead. Four others escaped. Neville Bardos, a chestnut gelding and the last living horse in the barn, was found in a corner. They heard him gurgling.

Continue Reading....
And be sure to pick up a copy of today's paper!!!
Posted by Amber Heintzberger at 9:07 AM 4 comments:

NAME: Emily van Gemeren
DOB: July 4, 1989
HOMETOWN: Canton, CT
WITH WINDURRA SINCE: September 2011
JOB DESCRIPTION: Working Student
Emily grew up on a horse farm in Connecticut and has been working with and riding horses for sixteen years. She began her eventing career at age 10 on a one-eyed Appaloosa pony when she started training with four-star rider Jennie Goebel Tucker.

While maintaining an active eventing competition schedule, Emily also rode for her high school's Equitation team with coach Rick Caldwell for four years as well as for the Dartmouth College Dressage Team for two years with coach Lindle Sutton. 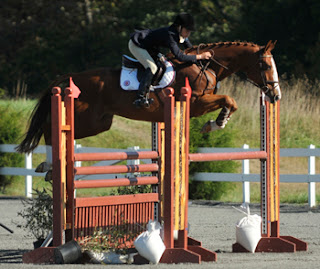 Emily came to Windurra for 3 months as a working student in 2009 during an off-term from Dartmouth College. Following her graduation in 2011, she has returned to Windurra to train, compete, and work until she starts graduate school (that is the plan for now, anyways!).

Her current competition horse is an Irish Sport Horse called Berkley. She began riding him in 2009 during her time at Windurra, and since then they have developed a special partnership, moving up to the Intermediate level at the end of 2010. In 2011, they successfully completed the Fair Hill International CCI** and plan to move up to Advanced this spring.
Posted by Lisa Thomas at 3:03 PM 9 comments:

It's that time of year again.........PRO Derbycross returns to Wellington 1/19 & 1/20!!
Come join Team Smartpak, which consists of Boyd, Jennie, Phillip, and polo player Nic Roldan for a fabulous event which blends elements of XC Eventing with GP Show Jumping.  Each team will consist of 3 event riders, 1 show jumper (TBD) and 1 polo player......with all team members tackling an exciting jumping course under the lights in Wellington.

Needless to say the Thursday night Calcutta is quite the party to attend, and the 7 teams in competition are all star studded.  Check out the promo video below & see you there!!
For tickets call 772-633-6129 or email info@professionalriders.org 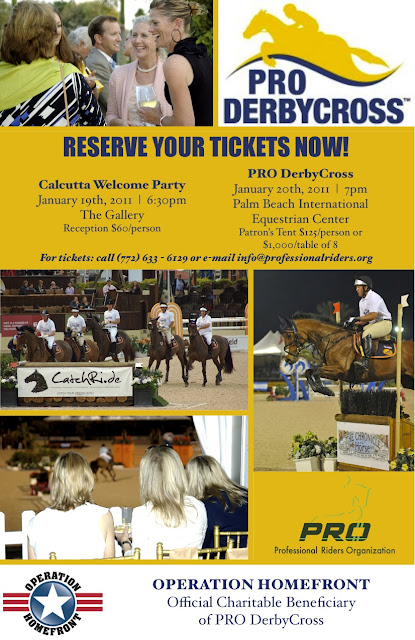