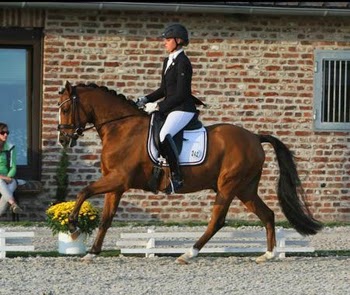 Giacomo Casanova is very talented and high quality Dressage pony who is being trained by Silva's sister, Laura Stigler. He has already placed and won in Germany in the young horse classes with high scores.

His ride-ability and character is outstanding. He is very light in the contact and super easy to sit. He has big potential to be a FEI pony.

A Day with Georgia

I had the pleasure to meet Georgia Dluhy this week when she and her mom Amy visited our farm. is only 13 years old and a hunter/ jumper rider. She had a riding accident in April of this year, similar to mine: her horse slipped while cantering on grass. Things just happen in life.

Like me, sustained a brain injury, and she is also going through rehab in the same hospital in Bryn Mawr. We are both very lucky that we are going to therapy at Bryn Mawr because they really are the best.

No two brain injuries are the same, and  is struggling with different things in her recovery. It was so nice to meet Georgia and Amy and I know how frustrating the recovery is, but I also know that it is a very short time in ’s life and she will look back on this later and agree with me.

I hope it helped to talk to me and I really hope that she is going to focus on other things than horses for now. I have spent a lot of time lately reading about fashion and design and I think it helps to keep your spirits up by focusing on things that you can do, rather than get frustrated with the things you can’t at this time.  is a fabulous artist; I love the picture she drew for me!! 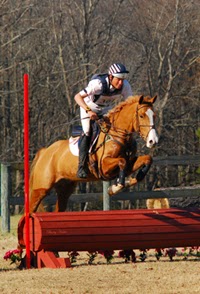 SBF Eowyn, also known as Wynnie, is the ideal horse for a professional, young rider or adult amateur looking to be extremely competitive in whatever event they enter. She is very well bred, fathered by the Dutch super-sire, Riverman.

She is a lovely, soft mover and is extremely ride-able and trainable for the dressage; she received a 25.8 at her first event. She is a scopey, careful jumper with a lovely gallop that only needs to be ridden in the softest of snaffles.  She has multiple wins to her name in her early career.

This is an exciting opportunity to purchase a very special horse that will bring you up the levels while winning; rarely does a horse of this quality get offered for sale.

Posted by Lisa Thomas at 5:32 PM No comments:

What Goes Down Must Come Up

Silva and I had a truly testing start to the new year. After great success early in the winter we both found ourselves challenged with the task of recovering from injury after I snapped my leg in half and Silva sustained a head injury. Both of these are obviously huge setbacks, especially in the thick of the season.

When you’re injured it’s an awful feeling because you feel like you’re never going to come back, and you’re watching your competitors get stronger around you. I’m proud to say both Silva and I are starting to get our tails up as we are both coming back to being 100%.

Silva is now sitting on a couple of horses a day, which I think has really re-invigorated her spirits. She’s carefully selected some of the quieter, straightforward horses to get going again. I think that in a short period of time we will see Silva go strength to strength and get back to her best.

I myself have been back to riding for some time now, and while I am still a little bit stiff and sore, I’m at least to a point where I’m full operational and competing all the horses again.

I was thrilled to have Shamwari 4 and Trading Aces - with Phillip Dutton  - put on the WEG team. Both of these horses were specifically purchased with this goal in mind and I feel with great performances at and Luhmuehlen they deserve their places on the team. Now that the selection is out of the way both Phillip and I are throwing 110% at keeping the horses as fit as we can, and going as well as we can, to do battle at Normandy in a couple of months.

As we prepare for the WEG, I gave Shamwari ten days off after Luhmuehlen and then put him back to work. He did his first gallop yesterday and Phillip’s had Trading Aces humming along for a fair bit longer and has galloped him a number of times since he’s had more time since now and Rolex. David O’Connor made a trip up to Unionville last week and actually rode both horses and seemed impressed with their current form. I think the way it works is he’ll be going from farm to farm on a weekly basis, helping everyone train.

We’ve some class horses in work here at the farm and I’m thrilled that Mackenna Shea, a three-star rider from , has come to join the team in the goal to get her horse ready for Fair Hill. She was ninth at Bromont and she’s got a really good horse under her in Landioso 12-year-old Bavarian Warmblood (Legendaer I—, Pilotek) . I’m always a believer in having good riders training around you lifts the bar throughout the barn, and with McKenna and Caitlin here it sets a high standard of riding for our farm.

As usual I’m always on the lookout for really good horses and new supporters to join in on this adventure. I was really impressed with the horseflesh at Luhmuehlen and it was a good reminder that we always have to be on the lookout for top horses in order to stay competitive on a global level.

-Boyd
Posted by Amber Heintzberger at 9:37 PM No comments: