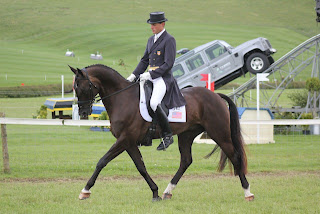 I am very proud to say that the 'Hanoverian Hurricane' stepped up and produced another fantastic dressage test today.  Mike Barisone warmed me up to perfection this afternoon at Barbury international CIC *** and  Remi went in the ring and put forth a great test that was nearly as good as his performance at Bromont.

He is placed 3rd behind Andrew Nicholson in 1st, and Jocko, 'the bricky from Campbelltown (link)' Paget in 2nd.  Remi is on a score of 43 in a red hot field of many Olympic contenders.  It was great to have Ron and Densey here cheering him on at one of his final competitions in a sensational career that has taken him to competitions in seven different countries. 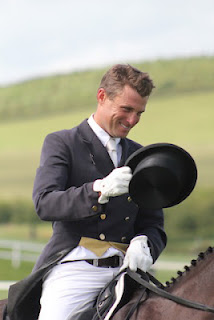 Tomorrow is another day with the jumping.  The show jumping course will be tough, with a course design that is built over undulating ground.  I believe all three of my horses should jump clear if I ride them well. 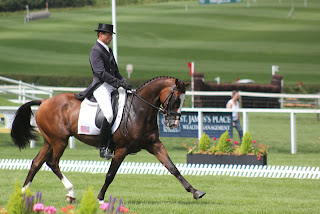 The mandatory outing at Barbury Castle is underway. For the leader board click here.

We had a good start to Barbury with Nev and Otis in the dressage today. Both horses have gotten better and better with every training session with my personal dressage coach Michael Barisone .  Big Mike has been great helping me work the horses this week, working on their softness and suppleness.

Nev was on first thing this morning and put in a great test that was similar to his test at Bromont.  He was precise, accurate and pretty fancy.  The best factor about the test was how calm and rideable he was.

Otis is also getting better and better also with every outing.  He was better than Nev in the trot, but was a little greener in the canter, which cost a couple of points.  All in all, I am very happy with the Flying Frenchman today, as he was a little more settled than during his last test at Bromont.

Tomorrow Remi is on last thing in the afternoon.  The plan is to turn him loose and put in a dazzler.... 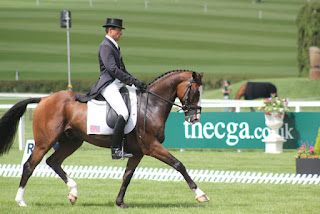 Barbury Ride Times are up:

We had the best weekend at Ride For Life in Maryland! Kymmy, Amy and I took 6 horses and Kymmy also rode Sheelagh Christiansen's horse Comet at the show.

As everybody can imagie, it was a busy weekend with seven horses: all the tests were one after another, plus the heat was making everybody very tired....
We missed having Devon with us but Kymmy was absolutely amazing this weekend. She had everything and everybody organized and the horses looked gorgeous. I could not do what I do without her; I do not have to worry about anything and can really focus on my tests and my horses. I am very lucky that I have such great girls helping me! Amy, Sheelagh and our friend Cheryl also helped out a lot. We had a lot of fun !

Kymmy showed Comet for the first time this weekend in third level and she did a great job. The first test went well with just a few little bobbles. Kymmy had to get a feel for Comet in the ring, and the next test on Sunday was much, much better and they finished fifth!

This was only the third show for Amy together and PVDA is a big show with big classes and a lot of competition. Amy and Cece have come such a long way together and they are really starting to get a bond. Cece is the best little mare and she is perfect for Amy. They finished fifth with a 63% in training 2 on Saturday and scored 67% on Sunday in training 2 and finished eighth.
My horses were wonderful all weekend! Elite Pharis is just keeping up the good work and won both his second level classes again with amazing scores. We won second level test 2 on Saturday with 73% and won second level test 3 on Sunday with 74%.  Pharis is such a good horse and the judges love him. If anybody is looking for an honest , stunning looking horse that they can be very competitive with give me a call. Pharis is your horse!


Vanderbild was a little excited about the atmosphere and everything going on at the showgrounds on Saturday but he relaxed much more on Sunday and we finished third in his second time competing in a first level test with 68%. Vandy is only 5 years old and needs to go a lot more places but I think he is very, very talented and beautiful to ride.

I showed Domino Effect for Jacky Kinny. Jacky injured her leg falling of a young horse and asked me if I could ride Domino for a while. Since I have been riding him at home we decided it would be fun to take him to the show, and FUN it was! Domino is one of those horses that everybody looks for but cannot find. He is a true gentleman and has so much talent. I loved riding him in the show ring! He did not put a foot wrong in both fourth level tests; we won on both days with 71%.


Rosa Cha was her perfect self again this weekend. She loved all the atmosphere and was showing off big time. She is such a special mare for me because she has a lot of energy, which makes the warm up a little exciting at times but in the arena she knows it's time to shine. She is only 7 years old and the fourth level tests are not easy. Rosa had not placed second one time at fourth level - she has won every time - but because I also rode Domino, who is three years older and very solid, Rosa came in second very close behind Domino. Oh, she was not happy!!!
And Stately, surprise, surprise, was awesome! We performed in the Breast Cancer benefit gala on Saturday night: our theme was the play War Horse. My friend Cheryl Griffith has gone above and beyond, sewing her fingers bloody, making and outfit for Stately and me. It looked absolutely beautiful, and Ann Miller did an amazing job with my freestyle music!
Stately was a trooper with the costume and the lights and the music. He was fabulous - though in the first part of the canter the leg straps must have gotten too tight in between his legs and he put in a big buck!
Check out the story and videos on Horse Junkies United
On Sunday Stately and I showed in fourth level test 2 and he was better then ever! We won with 77%!!!

Posted by Amber Heintzberger at 2:14 PM No comments:

Training in England is going well with the US team. All of the horses look like they have shipped well, and are in good form for next week's final outing.

On Saturday the team of horses all galloped at Jackdaws Castle in Gloucester. It was an amazing farm with a choice of all weather gallops that are usually used for the horses that are in training with race trainer Jonjo O'Niell.

Remi, Neville and Otis trotted up the shorter hill once and then did one slow canter, then a faster canter up the big hill. 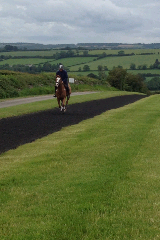 Posted by Amber Heintzberger at 1:15 PM No comments: