On the Show Jumping Scene with Otis Barbotiere

Here is a video of SBF Esprit de Jaguar going out for the first time at Stony Brook Farm South in Aiken, SC. Even though he is only two days old he looks like he has a monster gallop! He is a true athlete and I'm looking forward to the day I can ride him cross-country.

Many of Boyd's supporters and part of the organizing group for the Aiken High Performance Supporters' Day - including Fernanda Kellogg, Bonnie Stedt, Gretchen Wintersteen and Densey Juvonen - are working hard to make this a special occasion, and many of Boyd's syndicate owners will be attending.

Like all true events, this day has three phases:

Phase one is watching Team Coach David O'Connor coach the High Performance Riders with the new Developing Rider Coach, Leslie Law, providing the spectators with an inside view. Viewing with commentary will be limited and will be held at Stable View.
Phase two is an opportunity to visit some of Aiken's most beautiful stables in town and at Bridle Creek.
Several farms will be open for the first time.

Phase three is an evening reception with a presentation on the vision for the Land Rover US Eventing team by David O'Connor, Leslie Law and the new USEF Director of Sport, Will Connell.

Also join the riders and supporters of our current and future Eventing Team: the reception will be held at Kirk Henckel and Fernanda Kellogg's farm FoxFrolic in the tented stable courtyard and catered by The Wilcox. Triple Crown is sponsoring the day.

All guests must RSVP to Bryn Wells. 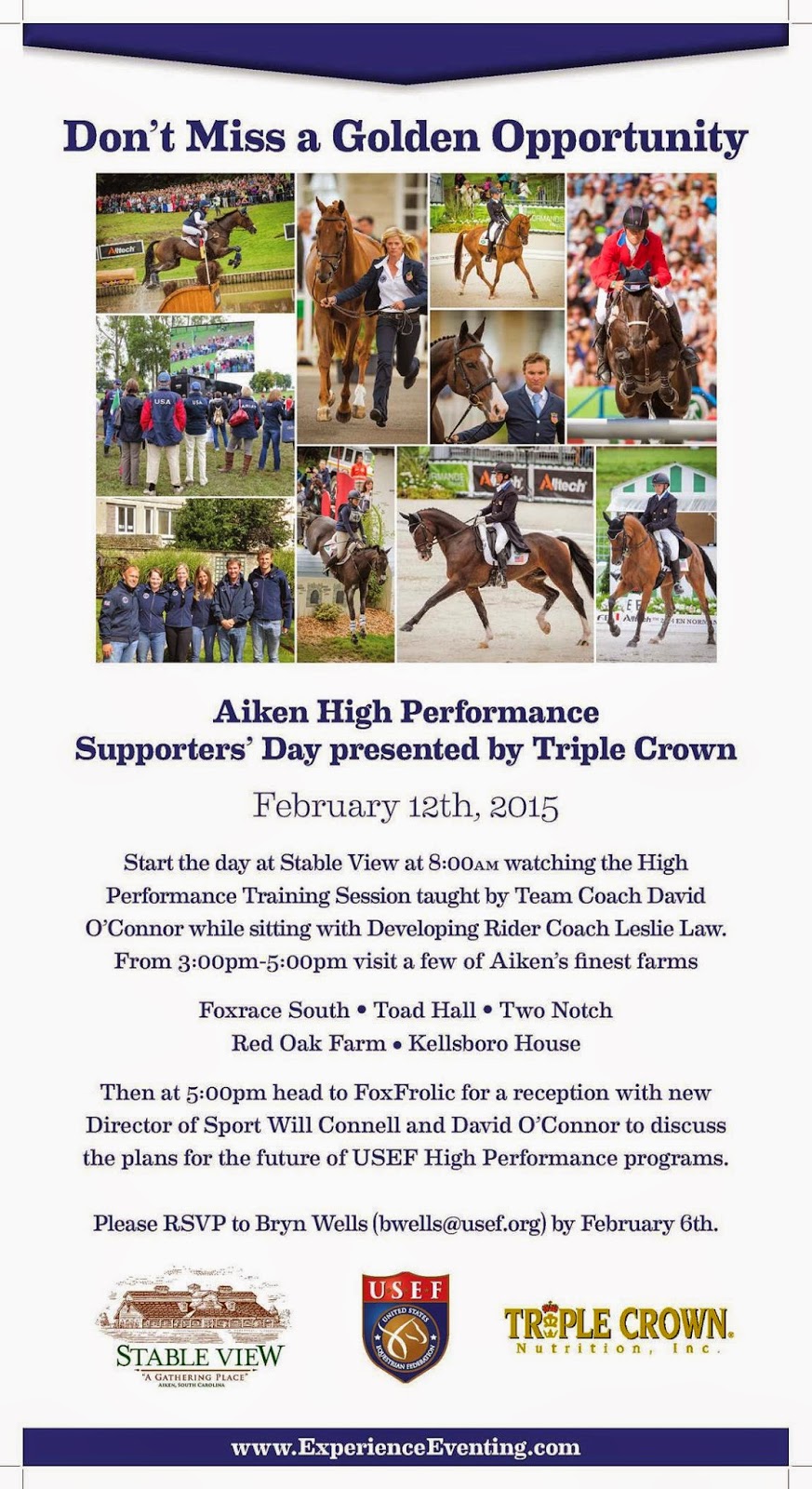 Posted by Amber Heintzberger at 8:48 PM No comments:

Rosa and Stately Pass the Jog at CDI5* in Wellington, FL

We are off to a good start of the new season with Rosa Cha W and Aesthete (Stately) passing the jog yesterday at the CDI5* in Wellington, Florida. It's a huge PSG class and they have to split it into two days. A huge thank you to Jerusha and Jessie for having the horses looking amazing!!!

Congratulations must go to Kentucky Young Rider Zachary Baugh on the purchase of 'Brewster'.

Katie and Cuyler Walker purchased Brewster as a three-year-old from eventing legend Bruce Davidson, and over the past few years we produced him to the Intermediate level. He is a beautiful moving Irish Sport Horse that has all of the talent in the world. Not only is he an awesome event horse, he has also hunted a season with the Cheshire Foxhounds with Dave Leinhauser in the irons.

I wish young Zachary the best of luck with him, and would like to thank Katie and Cuyler for putting this fine horse in training with me.

-Boyd
Posted by Amber Heintzberger at 7:20 PM No comments:

Reflecting on the Wellington Eventing Showcase

Yesterday I drove home to Aiken home from one of the best events I’ve had the privilege to experience. In a way it was a modified horse trials, with the cross-country only 4 minutes long, but at this time of the year when the horses aren’t fully fit, I would not want to have gone much longer. This was a nice warm-up to get the season kicked off. It was a great organized event where all three phases were held at the Global dressage facility, with cross-country on the Derby and Polo fields.

It was spectacular from the spectator’s point of view as you could see all three phases from the VIP tent. There were flat-screen TV’s with live scoring, breakfast, lunch and dinner served and waiters going around making sure everyone was looked after well. Because of this and the prize money the event attracted a lot of big-name horses and riders so I knew I had to take a couple of good horses if I wanted to be competitive, so I picked Pancho Villa and Trading Aces, who I thought would be best suited to this format.

Pancho has gone strength to strength; in the last month he’s really clicked into gear and was fabulous in all three phases, especially the cross-country. There were plenty of palm trees and Land Rovers to spook at but he stayed focused and jumped the course exactly on the optimum time, finishing in 7th place to take home $2,000 in prize money, to be shared amongst the members of his syndicate.

Trading Aces was of course the star of the show, and didn’t put a foot wrong as he led from wire to wire to win the event. He took home $15k which will also be shared amongst the members of his Syndicate. This is a great way to thank the owners that do so much for me.

Another $7500 was allocated to one two horse-related 501c3 charities of our choice. Since they were cheering us on at the event, I gave syndicate members Katie Walker and Gloria Callen the decision-making power to choose how to spend this money. Since many of the syndicate members are from the Unionville, PA and Millbrook, NY areas, they chose to donate the money to Plantation Field Horse Trials and Millbrook Horse Trials. I think this is a great way to give back to the sport of eventing and support a couple of fantastic competitions.

It was a great experience competing in Wellington – it’s one of the biggest crowds I’ve ridden in front of and a real privilege to showcase the sport down there with lots of interested horse enthusiasts based in Wellington stopping by to check it out. I think it was a great success and we’ll see it go from strength to strength in the future.

Posted by Amber Heintzberger at 9:51 AM No comments: 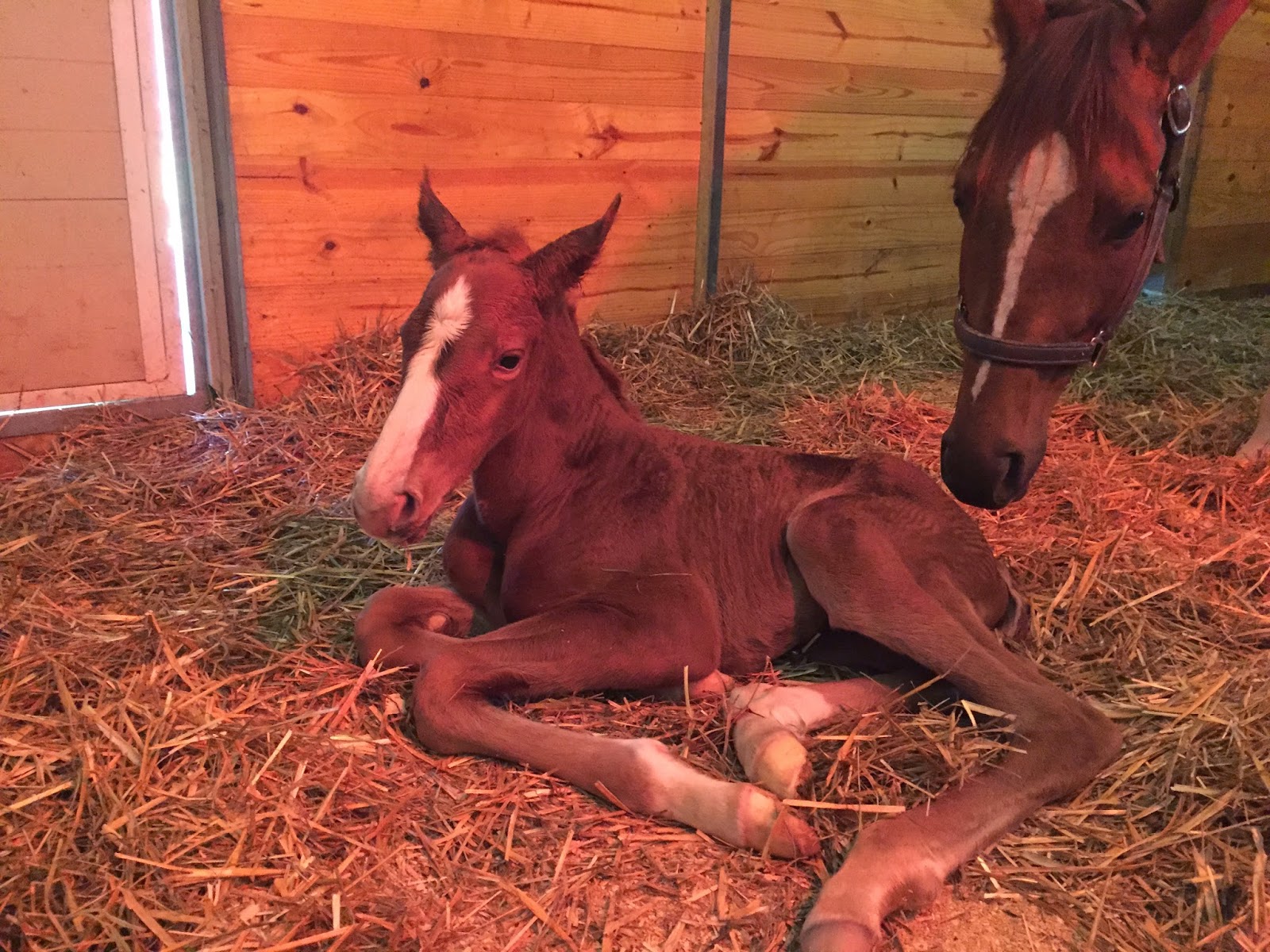 Congratulations to Denise Lahey and Pierre Colin, whose mare foaled an outstanding chestnut colt yesterday: Espirit de Jaguar SBF. In my opinion this is one of the best-bred event horses around when talking about his pedigree.

His dam, Rising Spirit, competing up to the two-star level and is an awesome jumper. This mare was bred by Peter Barry and is sired by English stallion Primitive Rising, whom has produced four-star eventing superstars like Supreme Rock.

The sire of Esprit de Jaguar SBF is Jaguar Mail, who is looking to be one of the leading event sires in France. The eldest of his progeny are seven years old now and are looking sensational.


Espirit de Jaguar SBF calculates to having 83.4% Thoroughbred in his pedigree, which I think is ideal for a big time four-star horse.

I'm looking forward, in four years' time, to giving this guy his first start at Beginner Novice in Aiken.


Posted by Amber Heintzberger at 5:59 PM No comments:

Boyd was included in lots of great media coverage from the Wellington Eventing Showcase. Here are a few links:

The Chronicle of the Horse: