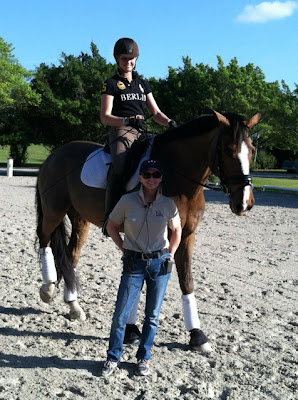 I rode Stately in the Developing Riders clinic with Debbie McDonald in Wellington, Florida yesterday and this morning. I had two great lessons with Debbie: Stately was amazing, as always. We worked mostly on the basics and Debbie gave us some good exercises.
She agrees that Stately not only has the physical ability but also has the right head for it. She could not believe how smart he is. All the things we worked on on the first day were no issue the next. 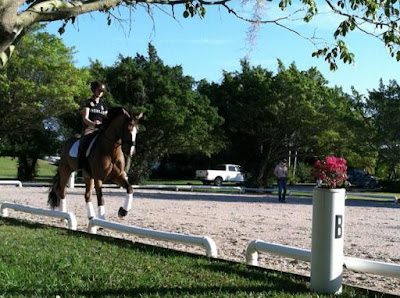 Debbie says that it is very important for us to keep working on the basics and Stately's strength . He is so smart that he will learn anything very fast and when he gets strong enough he is going to be amazing. 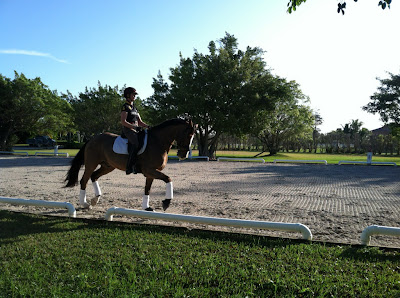 The best thing about Debbie's lessons is that she is not trying to change too much. Michael and I have a good program for Stately and she just kept it pretty much the same. She says Stately looks great and we are on the right track!

Of course Faye came to watch us go and to be the groom! Thank you Faye! If anybody is looking for a groom, she is amazing! But unfortunately for the rest of you, between being a groom for Eliza and me she is pretty busy!

Stately, my mum, ( who is visiting), and I are now on our way back to Aiken.

Silva
Posted by Amber Heintzberger at 9:49 PM No comments:

Posted by Lisa Thomas at 7:38 PM No comments: 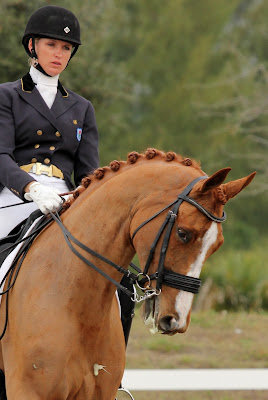 Photo of Silva and Duvent courtesy Cindy Lawler
We had a good weekend in at the WCSC. It was very hot and humid, but I guess we should not complain since it's better than the cold and the snow! 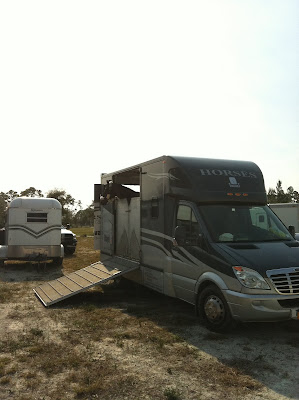 Rosa Cha won both her third level classes with over 70%. She loves to show off and turns it up every time we go to a show. She loves to be braided and groomed and I swear she winks at the spectators and judges as she goes around the ring!
The girls and I decided that if Rosa was a person she would be doing beauty pageants for sure.

Hidden Promise was great again this weekend. He is such a great horse to have at the shows: low maintenance in every way! Promise showed third level for his second time this weekend; yesterday he placed second in a huge class with 67%.

Jeff did great in the Prix St George. He is such an impressive, powerful horse and the judges love him. We finished third in a big, competitive field with 69%.

Duvent performed a very nice test on Friday in the Prix St George. This show is very electric and there is a lot going on. Duvent needs more time and needs to see more places like this; he is going to be great once he gets more confident. We scored 65% and finished seventh.

Party Boy was very excited about the surroundings at this amazing place. I am sure he has never seen anything like it before. He was nervous but handled himself pretty well in the training level tests; we finished second on Friday with a 66% and fourth on Sunday. 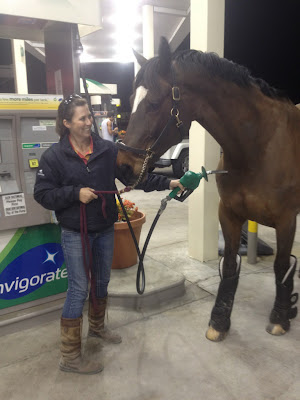 Poor Markie came down with cellulitis on Thursday. His leg is huge and very painful. He is doing much better already but Kymmy and Markie unfortunately did not get to show. (Check out the photo of Kymmy and Markie at Gas station - Kymmy had to get him of the trailer a few times to let him walk around a little for his big leg.)

I would like to thank my girls for doing such a great job this weekend! We also had Kymmy's parents, CarolAnn and Scott, helping out a lot. Thank you for a fun weekend!