Boyd is home from Australia and wrote this tribute to his late father, Ross Martin:

As you have heard, my father Ross Martin passed away last Saturday afternoon in the Royal North Shore Hospital in Sydney. A week earlier, he was in a bike road race where he had a collision with a truck, breaking the C3 and C4 vertebrae in his neck, leaving him paralyzed from his chin down.

I feel very lucky that I had the opportunity to fly home and be with him for his final two days. He was happy to see me, told me that this 'was no big deal', and 'such is life mate' before dying in his sleep.

My Dad had an amazing life. He was born in Bega hospital in 1943, son of a school teacher. At the age of 4 his mother disappeared, never to be seen again. Dad's grandmother looked after him and his two sisters. Dad never attended school until the the 4th grade; by the 6th grade he had won a scholarship at the exclusive Sydney Grammar School.

After finishing high school, he decided to ride his bicycle 400 miles to get a job as a farm hand with sheep and cattle in Cooma. His boss, Bruce Haslingden, was one of Australia's first ever winter Olympians. He saw talent and work ethic in my dad, and encouraged him to start seriously Cross Country Ski racing.

In 1968, Dad represented Australia in the Olympics in the 15 km and the 30 km cross country races in Grenoble, France. He met my mother there, where she was representing the US in the 3000 metre speed skating race.

He was a great father to his kids. Our family holidays included hiking trips to the base camp of Mt. Everest and 1000 km bike rides across Outback Australia. To the end he stayed a true competitive athlete, competing in ocean swim races, cycle racing and multi-day mountain bike trips.

It was unlikely that he was ever going to retire to an old age nursing home. He was a workaholic, loved his dog Cathy, and hated buldgers (anyone that did not work hard). He was a classless man who had friends from all walks of life. He was generous to a fault, but hated to be thanked.

I must say he was very proud of my eventing career. He encouraged me to stay away from university and instead chase my true passion of training horses. He was very supportive of my move to the US, and my change of nationality. It was a great feeling riding in front of him at the WEG last year.

He had a wonderful sense of humor and made many friends in the American eventing community. I was lucky that he came to the Fork Horse Trials this year. He had a great time as he watched me ride and enjoyed a few beers with the riders in the tent on Saturday night.

He was buried in a paddock next to Bruce Haslingden, overlooking the Snowy Mountains where he worked as a jackaroo as a young man in Cooma. I will miss him greatly, and truly believe his life has been so much a part of my success. 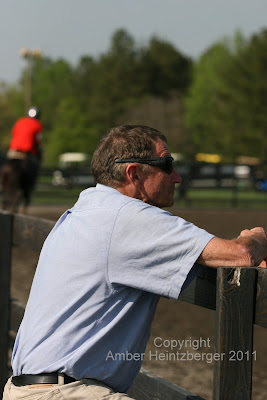 Ross Martin watching Boyd and Remington XXV win the CIC*** at The Fork in April, 2011

In yet another tragic turn of events, Ross Martin, Boyd's father, passed away this weekend after having been hit by a truck during a cycling race and sustaining severe injuries. Boyd was able to travel to Australia to see Ross before he died, and is there with his family now.

I had the great fortune to meet Ross several times when he came to watch Boyd ride in the USA, and always enjoyed his enthusiastic e-mails about Boyd's riding career here in the States. He was able to attend The Fork three-day event this spring and had the joy of seeing Boyd and Remington win the CIC***, where I caught this photo of him ringside.

The support for Boyd and Silva following the barn fire at True Prospect Farm has been truly overwhelming, and Ross was so impressed with how the horse community here stood behind them during this tough time.

Especially in the tough times it is the horses that give Boyd hope for the future, and he is excited that Neville did his first gallop since the fire at the Fair Hill training track today (see video below). Boyd is still considering taking his partner in crime to the Burghley CCI**** in England this fall if Neville's health and fitness continue to improve. Let's all keep cheering them on.