HORSES IN THE MORNING host, Jamie Jennings, along with Helena Bee of HRN’s Stable Scoop Radio Show, are hosting the First Annual Hottest Horseman Awards Show on Thursday morning December 30, 2010 at 9 am Eastern.  Listen live at www.horsesinthemorning.com or on your iPhone or Droid Phone at www.horsesinthemorning.mobi.
Jamie and Helena are leading the charge in this fun and exciting celebration of the fabulous horsemen in all our lives. With such a diverse population of dedicated, bright and handsome men in the horse world, the ladies of HRN thought the end of the year would be a lovely time for us horse girls to show our appreciation for the men among us.
THE BEST IN BREECHES IS OUR OWN BOYD MARTIN!!:
COME ON LADIES.....I THINK THIS WAS A "NO CONTEST"!! 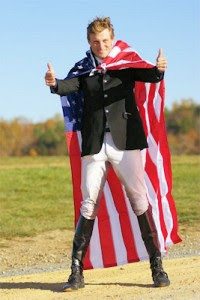 Australian native Boyd Martin, 31, relocated to the United States in 2007 to pursue his dreams of international eventing competition. He and his wife Silva, a Grand Prix dressage rider who is originally from Germany and now rides for the USA, operate Windurra USA out of Phillip Dutton’s True Prospect Farm. Now riding for the United States, Boyd, who has dual citizenship, was the top-finishing American individual and a member of the 4th-placed US Eventing Team at the 2010 Alltech World Equestrian Games in Lexington, Kentucky.
With three horses competing at the three-star level, in 2010 Boyd was named a member of the US Eventing team’s “A” training list, with the WEG as his goal. Three top-twelve finishes at the Rolex Kentucky CCI4* event placed him on the short list with Neville Bardos and Remington XXV. Following his success at the WEG, Boyd capped off the year with a top-ten finish riding Ron and Densey Juvonen’s Remington XXV at the Pau CCI4* in France, his first competition in Europe. Boyd finished 2010 ranked 5th on the international HSBC FEI Rider of the Year Rankings, 3rd overall on the US Eventing Association’s Rider of the Year Leaderboard and USEA Preliminary Rider of the Year. He has also been named to the 2011 “A” train
The winners are announced in the HRN 2010 Hottest Horseman Awards!  Jamie and Helena reveal the winners and even chat with some of them.  Do the names Boyd and Monty mean anything, listen in and see…

HORSES IN THE MORNING Episode 44 – Show Notes and Links:
LISTEN NOW!!
Posted by Lisa Thomas at 12:56 PM No comments: