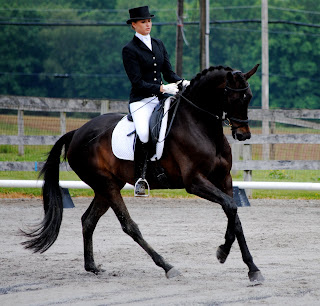 Rarely does a horse as talented and full of promise as Rosa Cha W present herself and we would like to extend to you the opportunity to join Rosa on her exciting journey to the international dressage arena.

By joining the Rosa Cha W Syndicate you will play a vital role in the development of this promising young mare’s abilities and the blossoming of her competitive career.
Rosa shows great potential: at 5 years old and standing at 16.2hh she exudes brilliance and talent and has all the makings of a future star. She has been to three competitions so far and won every time out, including the championship at her last show. She is already qualified for the GAIG Championships and for the BLM Championships. Rosa is a very special horse and we think she is going to do amazing things!

It is not by chance that she promises greatness: she is by Regardez Moi, (Who competed at the World Cup Finals and is going to compete at the WEG in Kentucky) who is by the great Westphalian stallion Rubinstein. We think that she will be a very good Grand Prix horse, since she is just like her father and we know him well. Her dam is Yasmin, who is by Medallion, who is by Matcho.

Rosa Cha W has been fully vetted, including 32 clean X-rays which are available to interested parties. She is sound and in good health. Anyone is welcome to stop by the farm and meet Rosa Cha W and watch Silva working with her.

Below you will find the syndication agreement as well as a general training plan. As with every plan things can change but it's our starting point. We are humbled and appreciative of your support. Please feel free to contact us with any questions.

Click for the full syndicate agreement
Posted by Amber Heintzberger at 12:16 PM No comments:

Another Great Weekend for the Dressage Horses at Bucks County 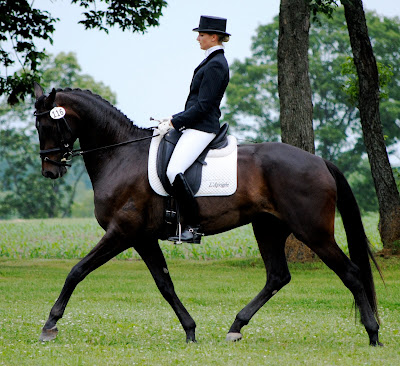 Rosa Cha W
Rosa was brilliant again. I am so happy to be able to ride such a amazing horse! Yes, she is very young and we are only doing training, but I have ridden many horses in my life but she really gives me an amazing feeling. Rosa is acting like she has been doing this all her life. She really went beautifully in both her classes and ended up winning both and was training level champion of the show!

Comet V was a good boy as well. He is getting more and more comfortable with the fourth level tests and he won both his classes too! 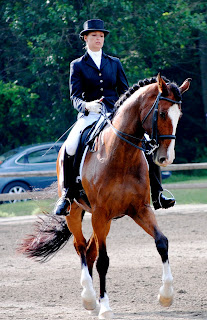 Denise Rotko brought her new horse Zugspitze (pictured left and right) to the show for me to school there. Denise imported Zugspitze from Holland about a month ago. He is a very impressive six year old horse with all the potential in the world. I am very very lucky that Denise and Michael Rotko asked me to ride this special horse.

Frank Burnes rode Theopolis Thisla W at the show as well. Boyd and I bred Theo and I trained and showed him all the way up to Grand Prix. We sold Theo about 2 years ago to Ann Carlino; Frank is riding him for her. We are so happy that Theo ended up in such a good home and Frank is doing a great job with him. 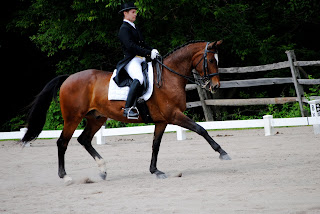 -Silva
Posted by Amber Heintzberger at 9:01 AM No comments: 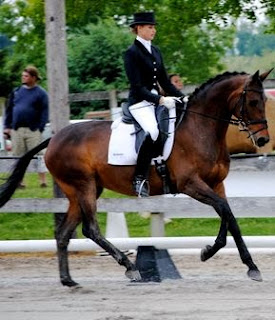 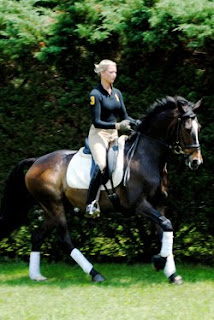 Silva has several talented sales horses in the barn!

Fair Fiona (top picture) is a sensational modern day dressage horse. She is a perfect mix of power, elegance and athletism.

London Venture is confirmed at second level and schooling third level dressage. He is a beautiful mover, nice to ride and trained to jump!

Please visit our website for all the details!
Posted by Lisa Thomas at 8:34 AM No comments: